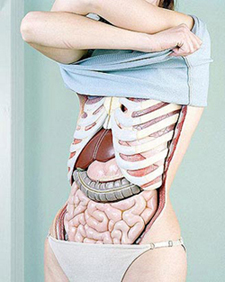 Can’t tell you how much I miss you and brother. Seems like just yesterday we were together warming our exposed innards by the fire. It’s hard to sleep here in the city with the constant threat of vermin sinking their teeth into my gallbladder, but that’s okay, following your dreams isn’t easy.

I just thought that becoming an actress wouldn’t be so taxing, I guess. A city that goes forever and I can’t seem to find any real employment anywhere around here. Just barely keeping my head above water doing day gigs in the back of a middle school classroom. Students always need to learn how the body works, but I don’t get the respect I deserve.

The teachers never pay me no attention and on Tuesday some kid tried to put my liver behind my intestines. He tried for fifteen straight minutes even though it didn’t fit. Just stood there punching and pounding away on my organs until they stuck in tight. It hurt, mama, but don’t worry, the janitor put me back together later that night. 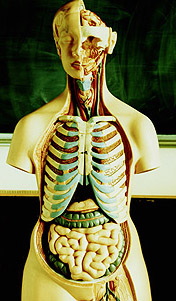 Listen to me complaining. Anatomical models, you used to say to brother and me, are lucky to have half a face, so I shouldn’t complain too much. In fact, when I take a hypothetical step back, I feel pretty proud with what I’ve accomplished. I mean, without hands, feet, or a mouth, how am I even writing this letter? But still, late at night in bed when I’m alone and fending off the rats I can’t quiet the ambition bouncing between where my ears should be. I want to be a star, famous, known around the world. I

want to prove daddy wrong. But I don’t expect much. I’m easy to please. Maybe an autopsy extra on Law & Order or a zombie could shake me kind of hard and my guts would fall out in some horror movie or I would be a good disemboweled victim in Law & Order: SVU. Anything! Remember when my dream was to appear on an episode of Wings? Seems so long ago, mama. Now I’m begging to be on the wrong side of a Criminal Intent serial killer.

I’m not like the other actresses I see and I might not be the prettiest, but with a good gal like me, it’s what’s inside that counts. That is the cheesiest joke ever, sorry. But you know what I mean, don’t you mama? I don’t expect the same success as Crystal Bernard, Tim Daly, Tony Shalhoub or the rest of that wonderful Wings cast, but I deserve something, right? 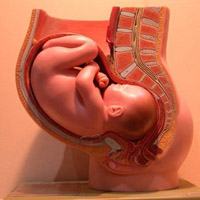 I know what you’re probably thinking, and I don’t agree. Sure I could be like brother and his wife, pumping out anatomical child model after anatomical child model, working part-time at the med school, but I’m not that kind of model. I’m supposed to be seen by the world, not just some creepy doc learning to catch crowning babies.

I haven’t met a husband because I’m not looking for one. I ain’t looking for any of that stuff. Only success. Sure I miss the farm, and sure I miss you and brother, but mama, I got to go out and try to get everything out there. Someday when I’m making an imprint of something or other on the Hollywood Walk of Fame, you’ll understand, but for now we’ll have to agree or disagree. I love you mama.