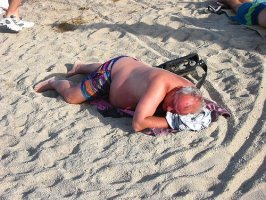 "Fun in the sun! Check my profile for more cool pictures of me!"Oh hey, it’s you, the guy who constantly talked about observing Movember despite the fact that he can barely grow facial hair. And did about 3 much-ballyhooed days of NaNoWriMo before realizing self-publishing was too expensive. And as if one Talk Like A Pirate Day weren’t bad enough, you do that shit like every Friday. You might even observe Guy Fawkes Day because you read a comic book, or worse, saw a movie, or even worse, hate Scientology. And you just changed your profile picture to a cartoon character. Yeah: Fuck you.

You’re probably minutes away from posting a no-opinion status update somewhere about Wikileaks or some other current event without taking any sides, so as not to offend the politics of distant relatives or any of the 2,400 everyday minor acquaintances you've managed to add as computer friends. It turns out, however, that your mechanic does not give a shit that you can’t remember Friday night. The receptionist at your buddy’s girlfriend’s mom’s office doesn’t think the exhaustive list of books on your profile is impressive. You’re not as cool as you think you are when you casually mention Žižek and even get the little things above the letters. Your music taste is not interesting to anyone except the person you’re banging, and that’s only so they can select appropriate tracks to bang you by.

If we wanted to know so much trivial shit about you, we’d have called you by now, but we haven’t. In fact, the only really necessary parts of your profile you’ll need to fill out are your name, gender, and relationship status. No-fucking-body is going to sit down and read your thousand-word autobiographical tripe unless they’re considering banging you, or mentally ill, or think that you might be mentally ill and worth trying to bang. (Watch for people asking what kind of music you like.) 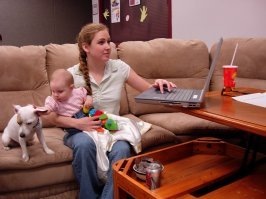 An example of a facility responsible for the creation of Baby Picture BarragesNo, it is not okay to beg us to give away our personal information for the privilege of playing some ridiculous hackneyed game to chop down fake logs or grow fake potatoes or do pretend crimes for you. There are real life logs and potatoes and crime sprees I could be reaping the benefits of myself, thanks.

It’s your birthday, that’s cool I guess. Nah, you don’t have to keep telling us about it, everyone can see the little thing up in the corner, gently warning us. We probably knew your birthday was coming up for at least a couple days, so stop transparently begging for birthday wishes. We know, and we’re not contributing to whatever tiny ego boost you get from turning 36 for a reason.

Stop pretending to be outraged over the Haiti donation money fiasco if you didn’t actually donate anything. Stop getting butthurt over having your illogical-ass political opinion demolished in front of everyone, especially if you don’t even vote. You don’t need to ‘Like’ your terrible hometown that you couldn’t wait to move out of. If anyone has answered a secret question about me that I have to do work to find out about, to hell with them. “Charlie Bit Me” still sucks, you don’t need to post it again. Oh my god, you’re an adult in the year of our fucking lord 2010, nobody cares which game console is your favorite.

Do NOT make a profile for your newborn baby, and do NOT use it to post things like, “Just made a biiig poopy! Looks like I just made a grande order of Baby Queso!” That type of shit makes a grown-ass man want to jump.

In fact, please, if any of this sounds like you, just unfriend me right now. I beg of you.