My Take On Rural Life 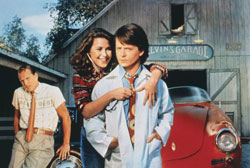 There's a whimsical appeal to the notion of leaving everything behind and moving to the country. Maybe you're overwhelmed by modern living and its uncomfortably close proximity to things like "other people" and "culture". Perhaps you'd like to live in a place where time moves so slowly that you will experience less in life and effectively die in the 1890's.

After growing up in a city and living in the suburbs for most of my teenage years, I currently find myself in a place where roosters scream at the rising sun - and the midmorning sun, and a passing cloud, and a thousand stimuli that are only visible to roosters - and lawns are measured in acres with a rather heavy acre stick.

If you've ever thought about settling down in the country, consider my take on the experience.

Everything Is Super Scary

The lack of ambient sound is unnerving for the first few months. At night, the only thing you'll hear is crickets. When you're miles away from the nearest population center, any other sound is Bad News.

A deliberate rustling sound, accompanied by the occasional snapping of a branch? Whatever that is, it does not have a good reason to be outside your goddamn window in the middle of the night. If you manage to call the police when it breaks in, they might show up before your body has been completely ingested by a wandering crazy person.

Even the daytime is downright creepy. If you have a wooded area or some sort of tall crop, every moment spent outside will be a struggle with your subconscious to block out all the bad slasher movies you've ever seen.

All Animals Want To Murder You

Where I live, we have these things called banana spiders: 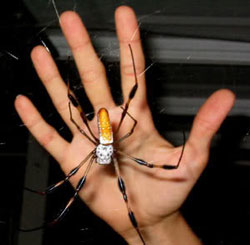 Not my photo, or my hand. I can only assume that everyone involved in capturing this image is dead and dangling from a web, their dessicated corpses squirming with thousands of baby spiders moving about just under the remaining layers of taut leathery flesh.

Fuck banana spiders. Their webs are sickly yellow things that can easily be lost in the sunlight, making it a certainty that you will walk into one every time you step outside. Have fun struggling to pull that out of your hair while you spit (oh god some of it went into my mouth, what is that taste?) and just generally act like an idiot while you try to shake off a spider that may or may not be crawling down your collar.

A word of advice: Don't spend all of your time looking up in an effort to avoid banana spider webs. Every now and then, you'll take your completely useless pug for a walk and realize that you just stepped directly over a snake. Sometimes that snake turns out to be a RATTLESNAKE. What the hell?

At one point, I had chickens. They were in a coop and everything. No, I'm not going to say that chickens want to murder you, though they are assholes. I only bring them up because something ate those chickens, one at a time over the course of a week.

This mystery animal tore apart the coop's wire fencing, avoided the barbed wire, and appeared to have torn each chicken apart in front of the others. Every time I repaired and reinforced the fence, that terrifying thing would get right back in and continue its psychological warfare.

No cryptozoological identification was ever made, but there is no doubt in my mind that the mysterious interloper wants to eat me next. I imagine that every night it prods at my house's defenses like a Velociraptor in Jurassic Park, looking for a weak point in the dinosaur fence. One day I will forget to nail enough boards on the air conditioning vents, and it will succeed.

In the meantime, I'll have to contend with possums, which are slightly smaller cousins of the bog rats in The Princess Bride. Every now and then one will wander onto my porch at three in the morning and walk directly into the leg of a chair - repeatedly. For hours on end.

I have no idea if these things are blind or simply self-flagellation devotees, but I'm sure that if you got drunk enough and passed out on the ground one would headbutt you about a million times until it fractured your skull.

In the interest of fairness, there are a few animals that are actually sort of cool.

Step outside with morning coffee in hand, and you'll often see a family of deer sneaking past, a baby deer pausing to stare at you as his tiny neck struggles to hold his massive wobbling head upright. I love these moments, but I also know that if deer become too comfortable with a human they might find themselves in trouble when they encounter a hunter. This is why I always set my coffee down and give them two middle fingers while mouthing "you jerks".

My property borders a horse ranch. Any time I approach my fence an audience of curious beasts will huddle together and watch my every move, tails flickering and eyes wide. Seeing a horse in person is sort of amazing, as television and movies don't really convey their size and powerful presence, which can be somewhat intimidating at first. They're incredibly gentle, but their muscular forms are absolutely bristling with potential. I bet a horse could open pretty much any jar.

Your Neighbors Are The Worst

Living in a rural area means having less neighbors and theoretically more peace and quiet. In reality, you are surrounded by assholes.

Most people that live in the country do so for horrible reasons. Maybe they're just looking for somewhere to cook meth and keep to themselves, but it's far more likely that they have some personality disorder that makes them violent and distrustful of others, or that they need to live in the country so they have plenty of space to drive their ATVs up and down the road all day, taking breaks to shoot guns and fireworks.

What's today? Christmas? Sounds like the perfect time for my neighbor to shoot off about three dozen bottle rockets while his eighty malnourished dogs go nuts in their cages. After a long winter's nap, he'll rev the four-wheeler's engine for half an hour, make a few half-hearted (and completely drunk) attempts at a wheelie, then disappear into his house and unload an uzi while someone else lets off a few shotgun rounds.

Was that a murder, or an everyday celebration? One of these days I will die from a stray bullet, and the answer will be both.

If you care about things like reliable electricity, clean water, or internet speeds that don't rely on the amount of crows perching on your telephone wire, don't even think about moving to the country.

You will lose power for absolutely no reason, sometimes for days at a time. Your water will come from a well. This is awesome, until you change your filters and allow yourself to wonder how much made its way past the petri dish and into your digestive system and/or butthole.

This only reinforces the fact that you're nowhere near civilization. If that's what you're looking for, then great. If you're like me, however, it makes urban decay and the vague fear of a meaningless death at the hands of a troubled youth seem downright quaint.