I've been thinking about Aquaman a lot lately. Now for the six or seven of you who haven't immediately gone to another webpage after reading the previous sentence, let me explain why.

Aquaman's been getting a bad rep recently. Many people have taken to publicly humiliating the guy by laughing and making jokes at his expense. No, I cannot provide any concrete examples offhand, because due to computer sabotage, all my IE links have mysteriously vanished (that's my way of saying, "I think I may have just dreamed that people were making fun of Aquaman last night. Nothing I deem as true is ever based in reality"). I believe this recent negativity is due to a general societal ill sweeping through America, something that has been creeping up along the spine of the collective United States like a poisonous tarantula. I'm not really sure why a tarantula would bother crawling up somebody's back, but for the sake of my analogy, let's accept that one would. 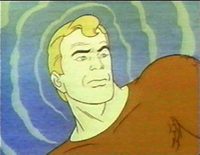 First off, America has been brainwashed into thinking Aquaman just can't "cut it" with all these new and exciting superheroes coming out every other day. If you were to walk into a comic book shop and find the strength to push the 400-pound man in a white Thrill Kill Cult shirt out of the way, you would see shelves and shelves lined with hundreds of brand new glossy comic books. Superheroes these days are full of glitz, flash, and a dark, brooding edge. They're mysterious, complicated creatures that lurk in the shadows and crawl through the night like a... tarantula down your spine. This contrasts greatly with how superheroes were back in the 40's and 50's. For example, back then it was perfectly acceptable to wear skintight outfits which would fit in with a Gay Pride parade or drug-induced rave. Costume designers at the time thought each superhero's outfit had to contain every primary color or villains just wouldn't take them seriously. These festive and pretty colors were quite the rage back in the day, but now they just create the impression that old school superheroes would be better suited in a Mexican wrestling league than fighting crime. There's not much one can do about this outlook; I can't even stay in fashion, much less dictate it.

All recent comics books revolve around guns and missiles and blowing up a quarter of the world in every issue of every series. If there isn't wanton destruction and an orgy of violence every page, the comic book probably won't sell. However, back in the 40's, villains didn't want to blow up the world or anything horrible like that. No, criminal masterminds back then were happy with idiotic penny ante schemes like turning all the street lights in their city red, which would cause the city mayor to get stuck in traffic while the villain's henchman breaks into the guy's office and steals the mayor's really nice gold pen. Villains didn't care about blowing stuff up in the 40's; if they could get through an entire issue without locking themselves out of their house they were happy. That's why Aquaman fit in so well - he didn't carry guns or bombs or any cheap stuff like that. For God's sake, the guy had a harpoon instead of a hand. Have you ever tried to stab somebody with a harpoon? It's not easy, especially if you've been drinking. This make's Aquaman's superhero-ness even more impressive, since the fact that he has no left hand qualifies him as being a true handicap.

Aquaman also had the ability to communicate with almost any underwater creature. While the comic regularly featured him "speaking" to giant seahorses, dolphins, and whales, one can only assume that he was also able to speak to less mobile creatures like sea cucumbers, starfish, and that poisonous plankton that shoots spores everywhere. He probably preferred not to talk to them because they never had anything to say. I mean, if you were a big sea cucumber on the bottom of the ocean floor, what would you say? "Hey Aquaman, it's really fucking dark down here and I haven't moved since the late 1800's so no, I'm not having a nice day." If I lived in the sea my whole life and suddenly found some guy with no hand swimming around in tights and asking me if I could help him save the world from an evil genius who was using kelp to fuel his army of Nazi robot zombies, I would ignore him. Hell, I'd probably try to bite the guy. Since Aquaman was never killed by a pissed off swordfish, this is a true testament to his psychic abilities.

The most important limitation Aquaman had to work with (and, as a result, I feel was his biggest claim to fame) was the fact that he had to do a majority of his fighting underwater. Being an underwater superhero isn't very flexible, and I'm sure Aquaman really had to perfect his persuasive speech techniques in order to lure bad guys near his territory.

Bad guy #1: "This coastal shipping yard looks like a great place to set up our illegal black market wax mustache trade."
Bad guy #2: (laughs evilly. The second bad guy always laughs evilly)
Suddenly, a loud horn sounds and Aquaman rises up from the depths of the ocean.
Aquaman: "Hey guys, why don't you come a little closer to the ocean?"
Bad guy #1: "Why would we do that?"
Aquaman: "All the really cool bad guys do illegal stuff by the ocean."
Bad guy #1: "Really?"
Bad guy #2: (to Bad guy #1) "Hey, I think this is the Aquaman guy we were warned about."
Aquaman: "No I'm not, my name is Steve and I'm with the oceanfront tourism board. Although I may be wearing the same top as Aquaman, I can assure you that I've got on khaki pants, something Aquman never wears. That is how you can tell us apart."
Bad guy #1: "I can't see no khaki pants."
Aquaman: "Well come closer and I'll show you."
Bad guy #1: "Okay."

...and then Aquaman would start beating the living crap out of the hapless goons. Sure, perhaps oceanfront villains aren't exactly the toughest guys to beat up on. They probably rank up there will the elderly and dance instructors in terms of sheer badness. But Aquaman was one of the only superheroes to constantly patrol and serve justice through the entire ocean. Hell, even Superman shared airspace with Batman, Spiderman, and the blind guy who wore red and pimp slapped shoplifters with his magical police baton. So the next time you hear somebody publicly slam Aquaman, approach them with confidence and ask, "Oh yeah? So are you saying you could continuously patrol over 71% of the Earth's surface better than he could?" Then you should punch them in the back of their head. When they're knocked out, put a tarantula on their back as your calling card. Just make sure you don't do it anywhere near the ocean.