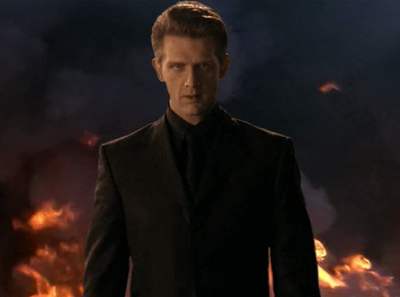 Music, television, movies...in any category of entertainment, there is a dark underbelly, a bizarre parallel reality in which all the swear words are replaced by Bible verses and every story has a moral containing the words "Jesus" and "salvation". We're not the first SA reviewers to scrape the bottom of the Christian cinema barrel, but for our introduction we've decided to aim high and go right for the semi-infamous Left Behind movies, probably because we were drawn in by Kirk Cameron's angelic presence.

As a piece of fundamentalist Christian propaganda, the Left Behind trilogy is surprisingly effective, mainly because you'll be desperately praying for the Rapture to pull you out of your seat by about 15 minutes in. As a movie series, it's so pitifully bad that the author of the Left Behind books sued the production company for breach of contract for the sole reason that the movies sucked. There's not really anything we humble comedy movie critics can add to that, but at least we can give you a guided tour of the madness. 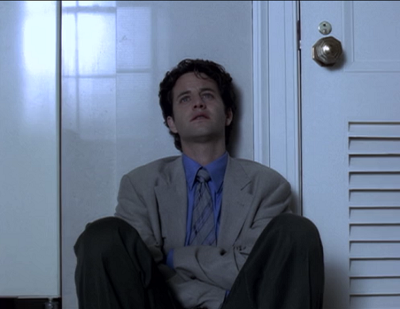 The festivities open with Kirk Cameron starring as ace smug reporter Buck Williams, who in addition to legally being a leprechaun also happens to be doing a fluff story in some random wheat field in Israel. Suddenly every jet fighter in the world flies over his head a hundred times and explodes! Fortunately the secret Israeli military HQ is right under the exact spot in the particular wheat field he just happens to be standing on, and he's of course invited in to hang out in the war room, no big deal. Then a mysterious bearded old man comes up to him and tells him all about the imminent rapture in ancient Hebrew, and he understands it perfectly even though nobody else does, because God really loves Kirk Cameron, we guess.

So far this reads like a 15-year-old pathological liar at Bible camp bragging to all the other kids about his family trip to the holy land last summer and how his dad is Kirk Cameron and high fived Jesus after dunking on Shaq and the Sultan of Agrabah, which makes a lot of sense when you think about it as an origin story for how this movie was conceived. But don't worry about things making sense right now, because if you try to make sense of anything you're about to see you will probably end up trying to scoop your own brain out like pumpkin innards or drowning in your own cerebrospinal fluid or rigging up an elaborate system to let you nuke your own head in a microwave. Case in point:

Oh, sorry, did we forget to mention that the most rational response in the whole movie to millions of people suddenly vanishing is definitely that guy trying to jump out of the airplane at 30,000 feet to go look for them? Nobody else seems to care much, and they certainly don't remember word one from the Bible about any of this; even the goddamn preacher who likes to get into shouting matches with the Almighty[1] needs a fucking mail-order "So You've Been Left Behind" infomercial VHS tape to figure it out. It's a shame, because there are lots of important and deep philosophical questions in the wake of the fucking rapture happening. Questions like "Why does God want everybody to be naked when he beams them into heaven? Is heaven just one huge cosmic orgy of the people God arbitrarily decided not to cast into hell for eternity for getting on his nerves or saying dumb shit into their duvet covers every night?" Or "Why is God punishing us by refusing to kill Kirk Cameron and drag him to hell for eternity right now?" 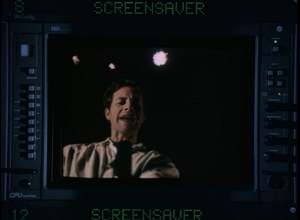 The Kirk Cameron Facial Gymnastics Screensaver never caught on, somehow.Not to worry, U.N. diplomat and all-around great (Russian) guy Nicolae Carpathia steps up as the voice of reason by going on TV to say that the disappearances are caused by "radiation buildup from decades of nuclear weapons testing", and somehow goes on from this to become the most trustworthy and respected man in the world, and then basically King of Earth. Everybody immediately accepts all of this even though it makes less goddamn sense than a Parkinson's patient with a Ouija board, but hey - God works in mysterious ways. Ways like allowing billions of idiots to be casually convinced that nuclear weapons testing 50 years ago in some crappy desert somehow magically vaporized people out of their fucking clothes while having no effect on anything else. Because Friendship (with God) Is Magic.

It goes without saying that Nicolae is the Antichrist, mostly because his name is Nicolae fucking Carpathia[2], but also thanks to his goofy overdone Russian accent which keeps kicking in and sucking all the dramatic tension out of the room. He does some Antichristy things, Kirk Cameron finds Jesus, and bam, that's a movie. We haven't mentioned Ray, the dumbass pilot of the rapture plane yet; he might technically be a main character, but his only contribution to the movie is commiserating with his daughter over her copy of the Squirmy Transitional Angsty Pop-up Teen Bible for Really Serious Grown-Up Mature Type Kids (or whatever the actual even stupider name was.)