Most of you have probably heard of the case of Ashley Todd, the former Ron Paul supporter turned College Republican/McCain campaign worker who shocked the dumb portion of the world with her story of being attacked by a large black man outside of an ATM who carved the letter B in her cheek. Here's a news article if you missed all this:

Todd handed the man $60 she had in her pocket and stepped away from him, investigators said. The man then noticed the bumper sticker on the woman's car, which was parked in front of the ATM. The man became very angry, made comments to Todd about John McCain and punched her in the back of the head, knocking her to the ground, police said.


"He continued to kick and punch her repeatedly and said he would teach her a lesson for supporting John McCain," said police Chief Nate Harper.


The man then carved the "B" into Todd's right cheek.


Todd's friend offered to drive her back in the direction she came from to look at ATMs until she found the right one, police said. A police officer followed until Todd pointed out a Citizens Bank ATM at Liberty and Pearl, police said.


She declined medical treatment at the scene and said she would go to a hospital today. 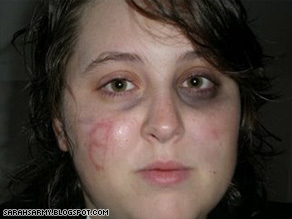 There were some problems with her story, of course. The first is that, like SomethingAwful's own DocEvil, she obsessively documented on Twitter every step of her night. Except maybe she was setting things up a little too conveniently for what she would have no way of knowing was going to happen next. Oh, and maybe she got a few bits of info wrong too, referring to the Citizens Bank as a Bank of America, and saying things like "this is definitely a bad part of town, I'm gonna get mugged by an angry political black man I bet" about a not bad part of town.

Oh, also maybe the B was backwards and didn't break the skin. Like how it'd be if you drew one really hard with your fingernail in the mirror.

Then, despite her airtight story, Ashley failed to shock the world by announcing that she had made it all up.

Ashley Todd, 20, of College Station, Texas, has been charged with filing a false police report, a misdemeanor, a police report said.


"This has wasted so much time...It's just a lot of wasted man hours," Assistant Police Chief Maurita Bryant said at a briefing. 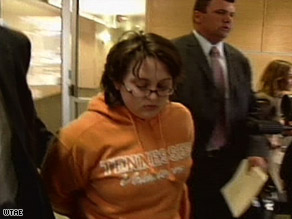 But there's a twist:

"She is stating that she was in her vehicle driving around, and she came up with this idea," [Bryant] said. "She said she has prior mental problems and doesn't know how the backward letter 'B' got on her face."

Wait. Hold it there.

She admits to making it up, but she doesn't know how she ended up with a fake black eye and a backwards B very very lightly carved on her face? I guess that makes perfect sense. Sometimes minor stuff just slips our minds.

Which is why I've decided to help jog her memory by coming up with a few possibilities as to how it all actually went down:

Ashley Todd was at a Citizens Fargo Bank of America ATM, getting her money and minding her own business in a bad part of a good part of town when a large black man came up to her.

"Cool! I work for the McCain campaign as well," he said. "You want a temporary McCain tattoo?"

"Yeah, my hand slipped. Looks like I kinda added a second swoop on that J. My bad."

"No worries," said Ashley, "I'll just say that you kicked and punched me repeatedly and said you would teach me a lesson for supporting John McCain."

"Ha, good one. Alright, have a nice night now."