The Boy Who Cried Wolfmother

Certain aspects of this column are regularly exaggerated, including opinions regarding the bands, and -- almost always -- the vehemency with which those opinions are expressed. That said, I really did find it excruciating to listen to Wolfmother's Cosmic Egg, and in fact I found it agonizing even having to type the words "Wolfmother" and "Cosmic Egg." Disregard anything from previous columns as you wish, but know this: Wolfmother represents the absolute nadir of current popular music, and any justification you might have for listening to them is misguided. 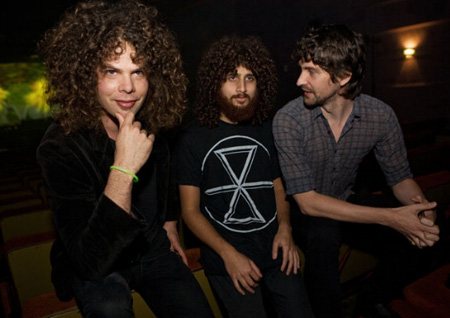 One Wolfmother member has started growing a curly Afro on both ends of his face.

Some people might remember Wolfmother as the anachronistic boogie-rock travesty whose ascent to popularity provoked Mike Patton to ask "are people that stupid?" The answer remains "yes!," based on the fact that Wolfmother still boasts a sizable following in 2009. Fans answer to "The Wolfies," which reveals how little dignity they have left. I've been able to verify their existence through albums sales and concert attendance, but I couldn't find a definitive answer to "what does a Wolfmother fan look like?" The group's MySpace page was useless, because regardless of the band, the people who post on MySpace pages just look like MySpace users.

Still, Wolfmother's music suggests a certain profile. For example, a typical Wolfmother user might embrace some Woodstock aesthetics, like psychedelic tangents and tie-dye and clownishly overgrown hair, without any of the modern hippie's vague, ineffectual commitment to social causes. He likes to mosh, but only to mid-paced rock, and only alongside his fellow Bro-hemians. And he rationalizes his Wolfmother fandom by claiming that at least Wolfmother is "real rock," and thus better than Nickelback or emo or R&B or whatever else preceded it on the radio.

There are several problems with this argument. One is that Wolfmother is actually worse than almost anything in current rotation, except on the alternative stations that insist on playing "vintage" tracks by Live and Marcy Playground. Secondly, even if it were better than everything else on the airwaves, that still constitutes a minisucle percentage of the amount of music that's available for free listening. Listening to Wolfmother because, "hey, it's real rock on the radio!" is like being really happy about finding a half-eaten slice of pizza in the trash when the dumpster you dived into is located next to a unattended grocery store stocked with quality products.

Before settling for Wolfmother, pick up not only everything by Led Zeppelin and Deep Purple, but also Blue Cheer, Pentagram, and really any fucking album from the '70s, including disco's entire discography and Debby Boone's You Light Up My Life. Then familiarize yourself with Australia's history of big, dumb crocodile-bludgeoning riffs. Then listen to modern stoner-rock groups, which sound sort of like Wolfmother except they actually include heaviness. After completing any of these tasks, you'll start to view Wolfmother with a combination of disgust, pity and regret, like a cosmopolitan adult woman recalling awkward grope sessions with her gross high-school boyfriend.

Supporters give Wolfmother credit for saving rock, but rock doesn't need saving, unless you mean archival preservation of old Chuck Berry albums and Big Bopper artifacts. The kind of rock Wolfmother plays is no longer necessary, because it evolved into doom metal and thus became far superior. Modern "hard rock" musicians are clearly insufficiently committed to rocking, because if they were inspired and capable, they would be in metal bands. 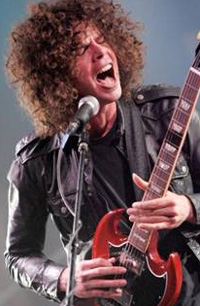 Andrew Stockdale gave this guitar away in a contest. Sadly, he had another one.The "hard rock" category used to include some decent groups, until metal and its subgenres became established enough to become a viable alternative. This is like how boxing used to be a major sport, until good athletes realized they could get paid just as much for sports that didn't render them catatonic (except football). People who can actually play solos and drum interestingly go into metal or jazz, while "hard rock" encompasses glorified bar bands and people who wanted to be pop stars but were too ugly to realize that ambition.

People call Wolfmother a Black Sabbath/Led Zeppelin cover band, but they aren't even qualified to warrant this insult. Those bands had guitar solos, good fucking guitar solos. Wolfmother plays basic, uncomplicated songs that could be charitably described as "raw, no-frills rock" and more accurately described as "shameless hackery." Also, cover bands charge less than real bands, and they have the decency to play songs that are familiar and relevant (at least in their original incarnation) instead of new, fruity shit about castles and unicorns. Wolfmother also sings about gnomes, mountainsides and rainbows: Even Rainbow didn't sing about rainbows this often. On a related note, the group increasingly looks like that Rainbow album cover where the group resembled a five-headed hair monster.