Another oddity from the annals of failed children's books, The Story of Xmas was the first and last title published by Random House's short-lived and ill-advised "For Kids By Kids" imprint. The brainchild of editor Walter Henslow, the book-line was to be a series of children's books conceived by actual children (and adapted by Henslow). Who knew what kids would like better than other kids? This was Henslow's logic. There was potentially some merit to the idea, but the grand failure and minor religious uproar that followed the December 1992 release of eight-year-old Dylan Bergmann's The Story of Xmas encouraged Random House to shut the label down before the experiment could run its course. Here it is presented with its entire text.

God used to live deep in outer space on his alien home world, Planet X. But in His infinite wisdom, God foresaw that Planet X was doomed - its destruction eminent.

Knowing there was neither hope nor time to save the planet, God put his considerable talents to work building a rocket ship. But his rocket ship ended up being really small, so there was only room for God to put his son, Santa, on board. With just seconds to spare, God launched the rocket into space as Planet X exploded really coolly behind it. It was not cool that God and his wife and everyone else died. That was sad.

Santa's rocket ship flew through outer space at hyperspeed, narrowly missing a bunch of black holes and evil alien spaceships, until it finally crossed paths with Earth, crash-landing into a manger in Bethlehem. Mary and Joseph, a childless couple, owned the manger, and they happily took in baby Santa as their own.

Santa had a very happy childhood. He liked books about dinosaurs and running through the cornfields of Bethlehem and learning lots of neat stuff from Mary and Joseph, who he called "Ma" and "Pa." As he got older, Joseph taught him the skills of carpentry, and Santa planned to become a carpenter too. That is, until he reached a special age and suddenly developed superhuman abilities due to the weaker rays of our solar system's yellow sun. He also learned the truth of his birth. Then John the Baptist showed up and invited Santa to a special school where Santa could learn to control and improve his powers. Imbued with a strong moral compass, Santa resolved to use his awesome new powers for the benefit of mankind. 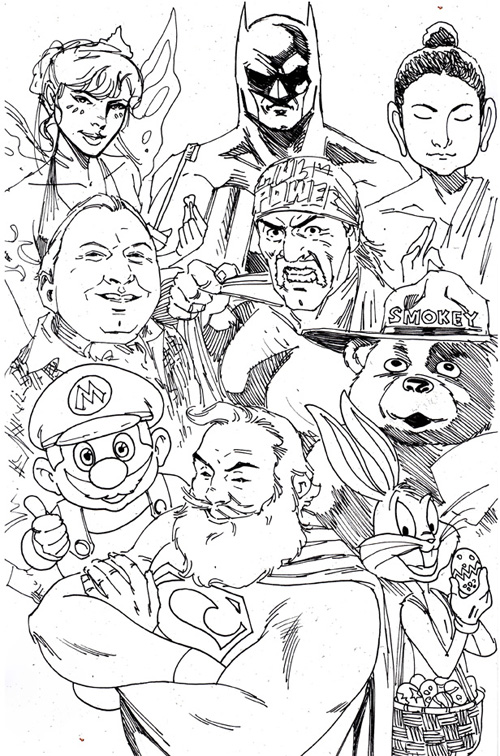 Santa was by far the most powerful being anyone had seen in a long time. Upon leaving John the Baptist's super school, Santa became the leader of the super team, The Disciples, along with fellow members the Easter Bunny, the Tooth Fairy, Buddha, Batman, L. Ron Hubbard, Hulk Hogan, Super Mario, and Smokey the Bear. Santa quickly became famous. He had fans, an entourage, his own cereal and action figure, and soon a small subset of the Jewish population was hailing him as their Messiah. Unfortunately Santa was tragically betrayed by a member of his own entourage and was crucified by the Italians.

But the story didn't end there!

So strong were Santa's powers that he discovered he in fact could not be killed, though it took him a solid three days to realize this. The rest of The Disciples all said "Awesome! Lets go do more good stuff!" but Santa was disillusioned by humanity's negative response to his attempts to help the weak. So Santa turned his back on the world and fled to the North Pole, vowing never to return.

There, over the centuries, he lived in solitude within the mighty ice fortress he constructed for himself to mope in, and lorded it over the North Pole's indigenous population, a race of tiny elven people. In his deep depression Santa really let himself go. He put on a lot of weight, and his long hair and beard grew massive and gray with age.

Then one year on Santa's birthday, December 25, all his old friends from The Disciples showed up to throw him a surprise bday party. It was the first time Santa had had any fun in hundreds of years, and he got really, really drunk. Towards the end of the party when Santa was opening up his presents, he made a boastful wager that he could bring presents to every person on Earth before the sun rose. "No way," his party guests all said. "Yes way," Santa said. Super Mario bet Santa $1000 that Santa couldn't do it.

So Santa ordered his elf slaves to make a bunch of presents, as they were expert stuff makers and could work super fast. But they did not have time to make very many on such short notice, and even with his powers of super speed, Santa was only able to make it to a couple million homes before the sun came up. He lost the bet to Super Mario, but Super Mario didn't make him pay because it was Santa's birthday.