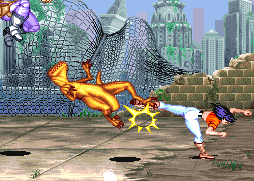 In a delightfully immoral and illegal secret facility, nearly a dozen breeds of dinosaurs have successfully been cloned. By nearly a dozen I mean eleven. Exactly eleven.

After fielding more than ten thousand submissions (ten thousand and one), the unnamed operators of this facility have narrowed the field down to the three most insightful and relevant questions.

The first one comes from Kelly in cyberspace:

"I've read that dinosaurs might have actually had feathers, like chickens or birds. I thought that they had lizard skin, like lizards and reptiles. What the heck is going on here? Do you have feathers or not? Please settle this matter once and for all."

In response, a Brontosaurus:

[The dinosaur munches on grass. Its large eyes are mostly white, with tiny pinpoints of black that wander in wildly different directions. Saliva dribbles down its chin, oozing long streamers that wobble as the beast chews.

In a moment of apparent inspiration, the dinosaur turns its head and regards its flank. It blinks several times, looking at the surface of its body. The brontosaurus urinates where it stands, the brown piss splashing up against its legs.

After a few uncertain moments, the dinosaur takes a quick step in one direction, changes its mind, then trots another way. It runs straight into a bubbling tar pit, not slowing down as the pool comes up to its torso, or seeming to realize its predicament as it goes deeper and becomes fully submerged.

In a suspended control panel, one worker shouts at another, pointing out his earlier protestations about building a tar pit in the dinosaur's habitat.]

This next questions comes to us from Kyle in Colorado:

We'll let a Velociraptor field this one:

[The beast tilts its head. It tentatively opens its mouth, making strange sounds. Talking. Trying to talk. It shakes its head, then tries again, but the words will not form. All its mouth can produce is a halting guttural cry.

The dinosaur looks down at its hands. Flexes them. Works the individual muscles, as if testing their ability. It mimics the act of writing. One claw open, as if holding a pad of paper. The other claw delicately clasping an imaginary pen, dragging out smooth and deliberate letters.

The velociraptor looks to the glass, where I stand. It points at my pad and pen. A few moments go by, then it turns its palms up in a clear "Well?" gesture.

After rubbing its chin thoughtfully, the dinosaur claps excitedly. It bends over, using a single claw to write in the dirt.

With a satisfied nod, the dinosaur brushes the dirt from its claws. An asteroid the size of a bowling ball streaks down in a blaze of hot death, pounding the velociraptor's head into the ground in a violent burst of energy.] 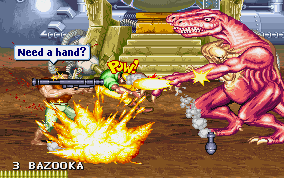 "It seems that intolerance is just as present as it has always been. We look for cartoonishly blatant acts, ignoring the casual demeaning of other races, sexes, and sexual orientations that occurs every day and influences our attitudes in subtle ways. Will we ever reach true enlightenment, or are we doomed to a spiral of defensive bickering and willful ignorance?"

Stepping up to answer this one, a Pterodactyl.

[The dinosaur struggles, shrieking and thrashing about. It absolutely refuses to let us put on the tuxedo. We put a lot of work into having this garment tailored and fitted. We flew a designer in from Italy, for crying out loud, blindfolding the poor guy and putting him in a submarine for a few days to disorient him.

After a third round from the tranquilizer gun, the pterodactyl collapses. We quickly go to work. One can never tell how long a dinosaur will stay under. Ten minutes later, the tuxedo is on.

Coming awake with a start, the pterodactyl squawks at us through the glass. It raises its arms, considering the outfit. After a few moments the dinosaur starts thumping its head sadly against a tree. This continues for several hours.]