How To Beat Up An Entire Football Team By Yourself

Start the fight by running along a wall in slow motion and kicking one guy in the face. Try to get his head to spin around and spray a fine mist of sweat into the air. Land with your back to everyone else, slowly turning your head to smirk over your shoulder.

One down, 44 to go. Or 52, if you're also going after the inactive roster. Take a moment to select your next target.

Don't go after the starters first. They seem like the most immediate threat, but it's a mistake. The no-name second and third string guys are used to sitting things out then coming in and making an impact. Focus on them right away to catch them off guard. As a bonus, an ignored starter is an angry starter, more likely to make a mistake as his wounded ego lashes out.

Block a guy's punch, grabbing his extended arm. Swing him around like a shotput then throw him into a crowd. Everyone will fall over when he lands, and they will all be rendered unconscious.

Grab two guys by the sides of their heads, knocking them together. A comedic coconut noise will ring out if you've done it right. 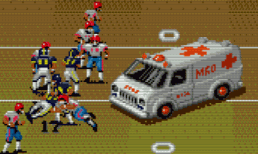 An extraordinarily large guy will split the air with a challenging roar. Stand still as he runs towards you, winding up his punch. When his meaty fist connects with your jaw, remain perfectly stationary. Don't bleed or get injured at all. Take off your shades and ask him if that's the best he's got. When he turns to run, casually pick up a football, inspect its seams, and toss it in a high arc. The ball will hit him on the head when he's really far away and he will be knocked out.

At this point you will be swarmed by a bunch of dudes. Neatly sidestep all of their attacks, countering with perfectly placed punches and kicks. Duck under one guy's extended arm, then spin, rolling across his back as another guy swings at you and connects with the first guy's face.

Let the group of guys overwhelm you. Disappear under the mass of snarling fury. After a few seconds, stand up and extend your arms, effortlessly tossing everyone into the air. Make it look like a pile of leaves being blown apart by a buried stick of dynamite.

Allow a pair of twins to close in on either side of you, their swords at the ready. Do a split as their blades swing through the air on their way to your head. Make sure the swords clang off one another, falling harmlessly as the twins grab their injured wrists. Stand back up quickly, your fists connecting with the twins' chins in dual uppercuts.

Roll to the side as the quarterback fires his sniper rifle from the open side of a hovering helicopter. Get a running start as he curses and reloads. Jump while pulling your arm back, then land your punch on the helicopter pilot's face.

After setting the helicopter's autopilot for the sun, pull out a bunch of random wires so the destination cannot be changed. Wave at the quarterback as he swings his rifle around towards your face then jump off and land on a rooftop before he can fire.

Find the stairwell. Make sure that all the guys coming up the stairs after you are in a single file line. Run down the stairs, punching them all in turn.

When you step outside of the building, have it rain dramatically. Flex your knuckles as the last guy emerges from an alley across the street. The kicker.

Stay still as he runs towards you, flashes of lightning momentarily illuminating his stark features. Remain calm as he winds up a muscled leg for the kick of a lifetime. As his leg extends, smile.

Note the look of confusion on his face as his foot connects with your chest. Or, rather, with your kick-proof vest.

After the kicker explodes in a fireball as tall as a skyscraper, stride through the flames. Reach your hand out and catch the coin that you tossed into the air just before the battle began. Don't even bother to check which side is face up. You already know who won. It isn't the guys you just beat up.

It's you. You're the one that won. Because you won the fight.