Welcome to another installment of State Og, where the fun never stops! Come to think of it, I can't really discern when the fun began, or even whether the feeling associated with reading State Og should be labeled as "fun" or "utter fear". What I can tell you is that this is a poorly executed segue into our weekly thanks. Thanks this week go to: Michael "Slash And Burn" Hollenbeck (Pong world champion), Jason "Vengeance Otter" Johnson (beat Frogger with one quarter), Brett "Nimmo" Hurban (dated Ms. Pac-Man), Aaron "Elcybergoth" Young (barely survived a car accident with Sinistar), and Dennis "Corin Tucker's Stalker" Farrell (killed after realizing Bionic Commando and Doctor Octopus are related).

State Og has always been fascinated with the world of advertising, mainly because it involves a whole lot of lying and underhanded coercion and we absolutely love that sort of shit. Not since the invention of television, which for the first time allowed us to lie to millions of people at once without breaking a sweat, has the world of advertising had such a monumental shakeup as the one which we are bringing to it now. 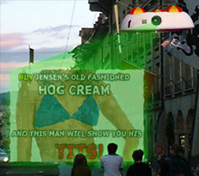 This was our concept: take the persistent unwanted pushiness of popup, popunder, popthrough, popnear and popalloverthefuckingplace advertising away from the greasy nerds who have held an unfair monopoly over it for all these years and take it out into the streets; to the poor and huddled masses yearning to assault lower primates.

With the first line of Advedroids rolling off the assembly line, this beautiful dream is soon to be a nipple-hardening reality of pure, concentrated advertising joy. Soon, the sight of an Advedroid hovering silently over the streets (much like the soothing sound of rocks in a blender, if the rocks had been swallowed by a cat just prior) scanning for target demographics, then swooping in to display the ads that they'll most want to see in living holographic color. Unfortunately, that color causes seizures in ten percent of the population, so if you're one of those ten percent we'd recommend staying inside and survivng on cat food and rainwater. 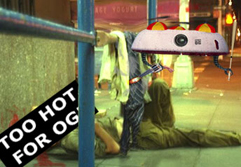 And even if the demographics are a little off, they're sure as hell going to listen, because each Advedroid is armed with a titanium-core Louisville Slugger and a Colte Cockmaster .45 Parabellum to ensure maximum market penetration and whittle down perpetually dismal exposure-to-puchase ratios. The product of Fine American Engineering produced by Americans right here in the good old US of A, the Advedroid might just shoot you because he doesn't particularly like the looks of you or you are engaged in some activity they don't cotton to `round Og Way.

So if you know what's good for you, you'll stop dead in your tracks --any sudden movement may be interpreted as an attempt to evade advertising-- and watch whatever the Adevdroid shows you and follow to the letter any polite, completely elective suggestions the Advedroid should happen to make. In rare cases the Advedroid may even demand sexual favors, so just play along for a little while till it gets bored and accept without argument any excuses it may make about its performance.

It’s hard to think of a more spiritual organization than State Og, especially after our company-wide conversion to the cult of Thuggee a few months ago. Our adoration and worship was devoutly given to the dark-goddess Kali, and the Indian Deity of Murder smiled upon us. We received her blessing in the form of happiness, ideas for a few new products and a good hearty laugh or two. Unfortunately, we hoped her blessing would come in the form of unimaginable wealth and total domination of the whole universe. While State Og’s coffers have overflowed and our power increased in return for our devotion, this isn’t enough! The size of our great wealth still resides in the realm of the imaginable, and our influence extends no further than Ring Nebula M51. Fuck you, Kali!

Since Kali couldn’t fulfill our unrealistic expectations, we’ve given her divine ass the boot and sought out a new supernatural being to become the State Og mascot … I mean official god. So, if you’re a god, goddess or a really powerful ghost, please materialize at one of our field-offices and hand in your resume and cover letter. If you can use your supernatural powers to give us unimaginable wealth and total domination of the whole universe, we want to hear from you. In return we can force all of our employees to worship you, and our employees can in turn force all non-employees to worship you as well. We look forward to hearing from all qualified candidates.

Kids hate to take their medicine. They either can't swallow the pills and you have to crush them into jelly and put it on a spoon, or you have to pretend that the liquid medicine is a choo-choo or an airplane or whatever you people who love your children do.

In our studies we have found that most children have an irresistible urge for the scrumptiousness of Medi-Cookies, and will continue to sneak Medi-Cookies from the cookie jar while you are at work or passed out. As with all medicines, it is recommended to only allow your children to consume a certain amount of Medi-Cookies in any one 24-hour period. We cannot tell you the safe amount that can be consumed, because that would be giving away secrets about Medi-Cookie's secret formula. We suggest that you use your own judgment when feeding your children Medi-Cookies.

Have you ever brought your newborn child back from the nursery only to discover that the child is actually somebody else's? Was your beautiful baby scuffed and marred by careless baby handling practices? Statistics have shown that baby switching and baby damage due to improper handling are on the rise in hospitals all over the world, leading to endless anguish and bad TV movies, and giving people no other option but to toss the bad baby into the trash. Thankfully, State Og is rolling out their brand new Baby Processing Factory so these disasters need never happen again!

The State Og Baby Processing Factory is an automated unit that, when installed into your local hospital's nursery, will care for the fruit of your loins with cold, heartless efficiency! You need never fear a case of mistaken identity again, as the Baby Processing Factory brands all newborns' names onto their foreheads with a hot iron. Over the course of the child's stay the unit will automatically handle feeding and bathing by regularly hosing them down with root beer and mashed corn. The Baby Processing Factory is not capable of the human error which damages most babies, as its huge, ungainly claw safely and securely manhandles the children around, only dropping them if they're bad. The Baby Processing Factory comes equipped with standard newborn childcare equipment, including an incubator, which we don't recommend actually using on a baby, but it's great for baking bread!

Once it's time for baby to leave the Factory flings them from their crib into the waiting and hopefully sure hands of Mommy and Daddy. Heads up, Daddy!

Look for a State Og Baby Processing Factory in a hospital near you! Don't trust your child to the dumb hands of stupid nurses!

The shower can be an important place for a man to gather his thoughts, hatch a plot to kill his family, or even clean himself. Thomas Edison understood the importance of time spent in the shower firsthand; he was actually in the shower when he invented the showerhead! Before that fateful day, people had simply stood in a tub and waited for it to rain. Unfortunately for those folks, most tubs were indoors and they rarely considered moving the tub outside.

Since then little has been done to improve our bathing experience aside from soap and modernized plumbing, which provides us with water free of life-endangering bacteria and venomous snakes. Until now, that is. State Og has developed a way to get the most out of your bathing time with the Shower Mate Buddy Pal. Once installed, this autonomous and helpful entity will be in control of every facet of your shower. What does the State Og Shower Mate Buddy Pal offer? That's easy! He keeps your water temperature comfortable, takes note of all the important ideas you have in the shower for future reference, and even tells jokes! You're sure to enjoy his humor, thanks to the cannisters of laughing gas that are pumped through the showerhead along with every joke. Never before have you found so much humor in a joke told by a robot, or in confusedly slipping and hitting your face against the faucet!

The idea of using such a product may be frightening at first, but we think you'll be fine once you realize that the State Og Shower Mate Buddy Pal is simply an extremely powerful being with questionable motives that silently watches your vulnerable and naked body every day.