Sadly, we're one step closer to The Avengers with the release of Captain America this week. He is, after all, The First Avenger! The first man ever to avenge anything, plus he was the captain of a whole country! Meanwhile, Justin Timberlake and Mila Kunis have sex.

EXPECTATIONS: In one way or another, nearly all of Marvel Studios' Avengers prequels have been underwhelming. They've been great fun, sure, but they haven't really been great films. Either the plot makes no sense, or the character development doesn't quite work, or it's just kind of bland. At this point, I can only hope that Captain America: The First Avenger isn't just another extended trailer for next year's Avengers movie. Given the title, I'm not that optimistic.

REALITY: If you'd told me three years ago, when all this Marvel nonsense was announced, that the one movie out of the whole enterprise to deliver a compelling character study would be Captain America, I probably would have socked you. He's a superhero who punches out Hitler while wearing an American flag on his chest, how complex could this guy possibly be? Well, that would have been a completely wrong assumption, because this film's greatest strength is how well it develops its central character. 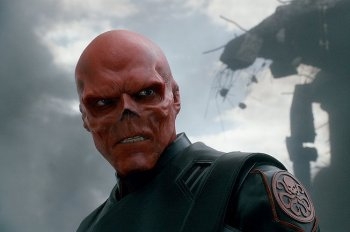 Hey, remember that movie The Mask with Jim Carrey? Not sure why that came to mind.You would be right in saying that it's time for comic book movies to stop giving us origin stories. By now, we pretty much know who these characters are; cultural osmosis being what it is these days, you'd be hard-pressed to find someone who doesn't know the basic idea behind Batman or Spider-Man (of course, that's not stopping Hollywood from rebooting them anyway just for shits and giggles). With Captain America, the origin is really all there is. Setting this film in the 1940s against the backdrop of World War II -- the war that birthed the character in the first place -- makes perfect sense. From there, the film goes to great lengths to show us exactly what kind of person this man is.

The film opens with Johan Schmidt (Hugo Weaving), aka the Red Skull. Schmidt has just discovered the Cosmic Cube, which we nerds remember from the post-credits scene in Thor. With it, Schmidt plans to build his Hydra organization into a world-dominating superpower (and also to power his arsenal of death rays). Then we meet a scrawny little guy named Steve Rogers (Chris Evans). He wants to enlist in the U.S. Army, but he is constantly rejected because he's a 5'0" asthmatic. He gets his chance when he meets Dr. Erskine (Stanley Tucci), who has developed a serum for the military that turns regular men into super-soldiers. The serum works, and suddenly Steve is a tall, toned soldier who's ready for war.

Instead, Steve is shoved into the role of a USO performer, wearing a silly costume and urging folks to buy war bonds, all the while cavorting with dancers and punching out fake Hitlers. The public loves him, but he soon learns that the military think he's a joke. When he finds out that his friend Bucky (Sebastian Stan) is trapped behind enemy lines, Steve takes the opportunity to turn his fake title into a real one and become Captain America: War Hero. Much like a man with an honorary PhD trying to practice medicine, Captain America doesn't actually hold the rank of captain; really, he's a PFC fresh out of boot camp. 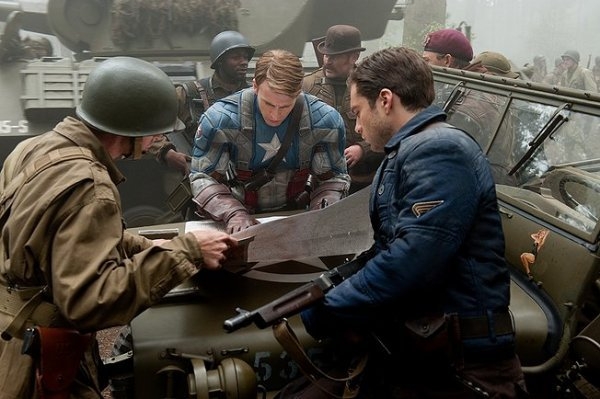 Now while Red Skull sneaks around in the background setting up his evil empire, the majority of the film revolves around Steve coming to terms with who he's become. In fact, Steve's ever-changing identity is the driving force of the film. His becoming Captain America kicks things off, his role as a USO puppet moves things forward, and his decision to kick ass and take names brings everything full circle. Red Skull, on the other hand, stays a cartoon supervillain from start to finish, and he doesn't get too much screen time at all once he takes off his Hugo Weaving-face to reveal a skull that is red.

Once all the dramatic footwork has been done, the film starts making everything explode. The action scenes in Captain America are some of the best offered in a superhero movie in a long-ass time. They're fast, they're fun, and most important of all they make sense. There isn't a single action sequence in this film that's difficult to follow, or one that cuts so fast you can't tell who's punching whom. Say what you want about Joe "Jurassic Park III" Johnston as a director, but the guy knows how to shoot action (hell, he's kinda made this film once before anyway). After sitting through a summer of giant robots, wizards, and mutants shooting energy beams and whatnot at each other, it's actually refreshing to see a human punch another human in the face. 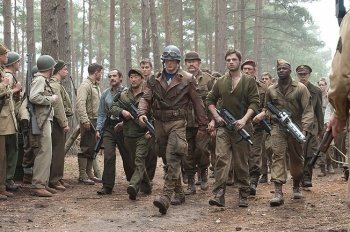 Captain America throws his uniform over his pyjamas when he fancies a lazy day.If there's a problem with the film, it's that it feels like they forgot to write a third act. The final 30 minutes or so only do enough work to get our characters to the next fight scene. Part of the problem is that we already know Captain America eventually joins The Avengers, so there's not much dramatic tension to the climax. In fact, this is really the only part of the film that suffers from Marvel's crossover syndrome. Up until the very end, Captain America does a remarkable job of remaining a self-contained story. Sure, Tony Stark's dad plays a significant role and Thor's Cosmic Cube is the all-important MacGuffin, but other than that the film really is all about Steve Rogers and Red Skull.

After consulting with my crack team of Captain America experts (and Vargo), I've learned that Cap being forced to perform for the USO is sort of a new development for the character. And it's a good one. For one thing, it gives us a wonderfully silly song-and-dance number from Alan Menken titled "Star Spangled Man." More than that, though, it lets us watch Steve grow into his role as a symbol for his country. He's already the clean-cut boy scout who's shy around girls and never backs down from a fight, but when he's shoved into a costume and given a theme song, Steve begins to evolve into something resembling a hero. The same way that the American public slowly accepted the character as he transitioned from a propaganda tool to full-time superhero, we can buy that Steve would want to use his public persona to eventually lead soldiers into battle. This sequence is a really cool look at the American propaganda machine circa World War II, and for my money it's the most entertaining part of the whole film.

I would definitely recommend that people check this one out, with the caveat that if you're expecting a film set in the 1940s and featuring fake Nazis shooting death rays at a soldier wearing an American flag to be "grimdark and serious," you may want to skip this one. Captain America is bright and fun in the way that the recent Batman films simply aren't. Not saying it's better, but it definitely nails that pulpy comic book feel. You'll either find this film cheesy and stupid and not worth your time, or cheesy and stupid and a hell of a lot of fun.

MINORITY REPORT: I was going to be hard to please with this movie, because Captain America is a character I take seriously. How seriously? Well, why don't you ask my daughter, Captain America "Vargette" Schneider? Oh wait, you can't, she has to finish her Nazi-punching before naptime or no cookies today. - Martin R. "Vargo" Schneider