Beat me up, Scotty!

If there are two things in this world that go hand in hand better than children and pedophile kidnappers, it has to be justice and severe beatings. For ages, people have used the concept of overpowering and subsequently beating the living fucking shitting fucking shit out of their adversaries as a way to show dominance, to settle conflicts, or simply relieve some job-related stress. Much like a bandsaw or a hammer, a brutal beating is simply a tool to be used as the situation demands. Sometimes, the situation even demands a brutal beating involving a hammer, which doubles the effectiveness of both tools. In fact, a beating can involve any number of things. Bats, clubs, sticks, blackjacks, Brazilian fighting rods, club shaped sticks, rocks, club shaped rocks, and Japanese club sticks (also called "clubs") are just a few of the more favored tools used in beating people into a bloody pulp. However, none can compare in popularity to the most widely used weapon of all: The human fist. Punching someone is a time honored tradition, and probably one of the most convenient and effective ways to levy a beating that a person has. Think about how many times you've used this powerful technique in your life. Why, just the other day, I entered my house to discover a mean spirited intruder with unknown (but probably evil) intentions. All seemed lost, but then I remembered what my Father told me after he severely beat me in a drunken rampage. "Punch em all and let God sort it out!" So I did, and the day was saved! While it turned out that the "intruder" was my "neighbor," and "my house" turned out to be "his house," who knows what could have happened had I not spent forty-five minutes mashing his face like a potato?

As great as punching is, there are some people out there who think it's wrong to arbitrarily hit whomever you feel like. In fact, some people even criticize others for engaging in this natural, beautiful activity. These bleeding face liberals are often at the wrong end of a punch, called the "Owie" end, and it rarely even crosses their mind at all to use it for their own diabolical purposes. While they lobby Johnny Lawmaker to enforce their outdated Assault and Battery laws, they are actually taking away the use of a beneficial and important instrument that the Police have to use to protect us. Sad as it sounds, not even the friendly neighborhood Police Officer can violently wail on a person anymore without being harassed endlessly about it. Just take a look at this semi-recent story that has sent the media into a frenzy!

LOS ANGELES - A white police officer caught on videotape pummeling a handcuffed black teenager has been indicted on assault charges, less than two weeks after a beating that has raised concerns over police brutality and racism. 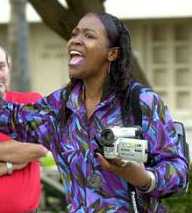 This sassy diva was the one who videotaped the teenager's beating, as evidenced by her video camera and the "No you didn't!" expression on her face.That's right folks, it looks like they're trying to strip Policemen of the right to barbarically beat and punch teenagers. If you're a person like me, one made mostly of Carbon, you should agree that this is simply outrageous. Why not take away a fireman's axe, or a surgeon's knife, or a lawyer's broad sword? Just as these people need the proper tools for their job, Policeman need to have what it takes to do theirs. Justice is most effective when it's handed out by the fistful, and the people berating this officer are as bad as Eva Peron, Hitler's comical sidekick.

This story isn't just about a few people in Caifornia somewhere. This affects us all, especially you people in California. How can you feel safe at night when there are teenagers, many under the age of twenty, gallivanting about unpunched? It's a well known fact that all teenagers are constantly committing crimes and spitting in the face of the law. And when they aren't, they're in school to become Congressmen so they can write new laws to break. It's a terrifying cycle, and the one thing that keeps any order or sanity in this world gone mad is the fact that for every punk teen loitering and smoking under age, there are two mighty fists of fury with their number. These fists belong to John Q. law, but not for long if the public has its way. Sure, it's easy to hide beneath a pile of bureaucratic mumbo jumbo when you hear about it in the news. But when you're faced with the horror of a real, live teenager with the intent to murder you or possibly loiter in a parking lot near you, how will you feel? Chances are, your first response to that question wasn't "woof." Unless you're a dog, in which case it probably was.

Another thing most of the anti-violence protesters are forgetting is the fact that violence is funny! As you all know, violence is related to anger. But what you might not piece together is that anger has been used in the world of comedy time and time again with successful results. Legendary comics such as Sam Kinnison and some other stupid angry jerks have used their intense rage to make millions smile. Well, angry public beatings have the same effect. Just take a look at this picture from the scene and tell me you don't laugh! 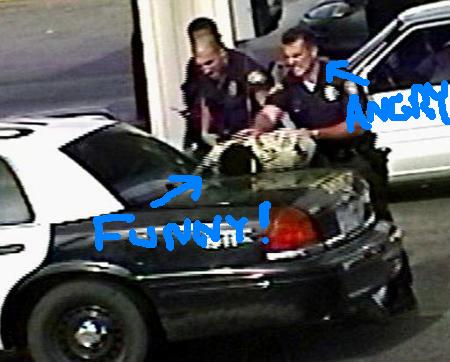 Clear as day, violence is purely positive. You may even want to send this image to your friends, to put a smile on their faces. Not even Jerry Seinfeld could match the sheer comic potential of a policeman randomly beating or clubbing some young black teenager!

As concerned citizens who want our streets safe from these rad, skateboarding terrors, I ask you to print this article out and send it to the President of the United states himself. Only he, as King of America, has the power to end the madness. Urge him to change the Constitution to his whim, and make it legal for members of the justice system to...

Punch people for being teenagers

Punch teenagers for doing anything

Arrest teenagers upon their thirteenth birthday

Try teenagers as adults in a court of law

Institute "Just say no" policy about becoming teenagers, sponsored by the Toys R Us corporation.

The President is a hard man to get a hold of though, so you may have to be creative to get his attention. If a letter writing campaign fails to capture his attention, and calls to the secret Presidential nuclear phone have no effect, you'll need to start thinking. As the President, one can assume he loves this country, and since he's a native Texan it's easy to assume the man enjoys guns. My suggestion would be to fold the paper the article is printed on into the shape of an origami handgun. Then, run to the White House, point it in his general direction, and scream the constitution word for word as loud as you can. It's a safe bet that you'd get through to him for sure that way!

Unless something is done about the meandering teenage menace, people like you and I will have to walk the streets not knowing whether we'll make it home safely. Until revisions to our legal system are made, we're left with only one option. We have to punch every teenager we see, until we've punched them all. If the Police can't do it, the citizens will have to do it for them. While chances are the teenagers aren't all bad, you can never be too sure. Teachers, punch your students. Parents, punch your children. Priests, take your hands off the younger children for just a moment and place them violently on the teens in your church. And please, for any of you responsible teenagers out there that might be reading this, do society a favor and punch yourselves. You'll be contributing to the greater good.