The Future is NOW!

In these changing times full of changing technology, changing ideas, and changing clothes it's no wonder that people are looking to the future with wonder and expectant hope. Of course, the future is turning out to be less and less like the perpetually dark and rainy cities filled with flying cars that were prevalent in so many movies from the 1980's, but it's not too late to make that happen. In fact, the 80's were full of ideas about the future that really should be implemented as soon as possible. These include such amazing technological breakthroughs as robot butlers, time travel, and cyborg cops. This future also means that there are no more animals, that people can talk to creatures from other planets, and that video games are actually training programs for fighting intergalactic space armies.

Let me address these one at a time so that I can really explain how great it would be if these things existed. Not only would I be very interested in living in a world that contained all of these amazing and beneficial things but I would just like to express my sincere disappointment with humanity at this point for not coming through with this stuff yet. Way to go, guys.

When I think of sci-fi movies of the 80's I think of robot butlers. The robot butler has always exuded wealth and class status. He seamlessly glides from place to place on his well-oiled wheels (but not over carpet or down stairs or anything), occasionally carrying cleaning supplies or cleaning equipment. He also occasionally carries drinks on a tray or a towel over one of his robot arms. The robot butler is synonymous with power and prestige. At parties, there is no need to get up and serve drinks because you are able to control your amazing robot butler from a seated position. Of course, you have to prepare the drinks yourself and set them on his tray, but after that it is nothing but ease and smooth sailing. Simply relax on the couch and use the remote control to instruct the robot butler from a distance of up to ten feet (but not through walls)! He will bring the drinks to your guests on his tray and you never even have to move. He is also always wearing a snappy tux which is sure to impress.

If I had a robot butler I would use him every day to carry things for me from place to place and also to occasionally stand still. 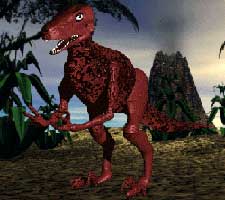 Time travel is one of the biggest enigmas humanity has ever faced, and yet its allure cannot be denied. If we could travel through time we would be able to see things that no longer exist, like the poorly rendered CG dinosaur over yonder and possibly Richard Nixon. We could maybe even travel back in time and warn our younger selves about future choices that might have been bad ideas. This would be particularly useful for me because I could travel back to before I ate the burrito that landed me in the hospital for four days with a tube up my pee-hole. Time travel would also allow us to prevent bad past events from happening such as the World Wars, disease, and the birth of country music. We could also prevent certain species of animals from going extinct such as dodos, passenger pigeons (so cool), great auks, or some other bird because birds are dumb and die a lot.

All of the people who argued and insisted that time travel presented some very real and also unsolvable ethical dilemmas would be ritualistically tortured and then shot. Until they were dead. It is people like them who prevent the cogs of the ignorant hive mentality from turning smoothly. Viva la future! 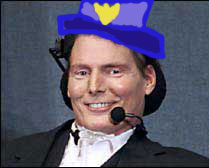 Cyborg cops are another element of the futuristic 80's that would be very beneficial for us to have now. With their super strength, rigid adherence to law and order, and their sub-human compassion, we would be sure to have a fair and solid police force in place. This way, there would be no unwarranted beatings of racial minorities. Instead, there would be regular beatings of minorities and majorities alike. In fact, everyone would be beaten equally and thoroughly, usually within inches of their life. The cyborg cops would go on beating rampages. At that point we would decide that cyborg cops are probably not the best idea and that mankind shouldn't try to "play God." Then there would be a big battle to rid the world of the cyborg cops, etc. etc. We would eventually learn our lesson. But what a wonderful learning experience it would be! 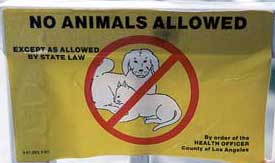 There would be no need for signs such as these in the future of the 80's because the animals would all be mysteriously missing, anyway. Whether we finally killed them all off or whether they finally decided that we humans weren't worth their time and boarded a space ship to go back to their animal dimension, one thing is clear:

A world without animals would be great, because it means that that stupid yappy dog in the other apartment would be gone and I hate that dog more than I hate most things that I hate. I would like to drop-kick that stupid dog across the country, or maybe run it over with some sort of large, heavy machinery. That dog sucks. Every damn day it is over there barking constantly at absolutely nothing and I swear that one of these days I am just going to go over there and squash it. It is one of those stupid little white dogs that look more like tacky lawn ornaments or freakish stuffed animals than canines. I hate those dogs. They're not even dogs in the true sense of the word. This one particularly has to go and I don't think I can wait long enough for the future to get here before conveniently and efficiently disposing of it myself. I tried writing the woman who lives there a nice letter explaining that if she doesn't shut her damn dog up I will come over there and shut it up for her, but thus far the letter seems to have failed in its mission. Perhaps it is time to change tactics, but I need to find a solution fast because this is quickly escalating to a white-hot rage such as no other I have ever known and I hereby declare that I am no longer responsible for my actions. 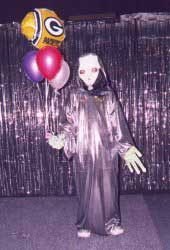 Since the dawn of time humankind has wondered whether life exists on other planets, and if so, what that life would be like. The good news is that in the future of the 80's, we find out that there is alien life on other planets and that a lot of it is sentient, even friendly. Unfortunately, the alien life tends to be goofy, ridiculous sacks of garbage with creepy, bulbous eyes and usually possesses useless powers such as the ability to organize people's living rooms at high speeds. Occasionally there will be the odd alien who rips people apart before they can blink twice or the alien whose only characteristic that differs from things that humans have are their extra large ears or little bumps around their noses or whatever. Whoopty shit, Batman.

Alien contact would be excellent in that it would have dramatic implications in the arenas of theology and technology. It might also be good because theoretically we could go to their planet and slowly take over, forcing our will upon them and destroying their equivalent of forests or stupid animals and whatnot. We could also take their valuable resources, such as oil and gold. In this way, the first stage of our conquest of the universe will begin and soon we will have control of all things that exist, everywhere. We will be more powerful than we had ever dreamed, and there is no way that anything could ever go wrong or that our plans could be thwarted at the last second by a hero of any sort. There is also no chance that we will ever see the error of our ways and live peaceably in harmony with one another. USA! USA! 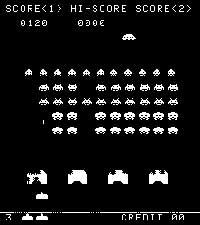 A final example of why the 80's sci-fi movie vision of the future would be great is that all of the time that we nerds spend playing video games would finally pay off. Everyone who doesn't completely suck has seen "The Last Starfighter," so I don't really have to go into detail here, but suffice it to say that I am really training hard this month. I'll bet I have logged in over 50 hours at least working and practicing to destroy the alien hordes. I'm not sure what my playing Warcraft III and listening to my undead acolytes proclaim that they would give their lives for Ner'Zoul has to do with me helping to fight off the evil aliens, but hey, I'm not complaining. Lemme at 'em! My frost wyrms will kick their alien asses back into deep space!

It would be good to know that the time I spend playing video games is actually beneficial to someone somewhere, and I am sure I am not alone in this sentiment. I have this nagging feeling that when I get my Furious Gauntlets of Wisdom of the Badger and also Faeries in "Chris Taylor presents Chris Taylor's Dungeon Siege by Chris Taylor Chris Taylor" that I am just living in a deluded fantasy world that has no basis in any reality anywhere, ever. If I knew that I would be using those gauntlets to fight intergalactic invaders and that my low intelligence score of 16 might at some point prevent me from fighting with sticks (apparently you have to be realy smart to use sticks)I would feel much better about spending that time from my life playing games and I would work extra hard because I knew that I would be playing a role in saving humanity. Or I would just take a nap.

I suppose that I don't need any of this crazy stuff to really think about the future as being now. We have computers that do fast and complicated things with Red Hat Linux and we have machines that cook our food at high speeds and temperatures, so we don't really need anything else. We live in a very strange time full of very strange things, with the intra/webnette being a prime example. I am overall very happy with the way humanity is progressing, although I still blame all of you collectively for not having made sure that we would have flying cars by now. I mean, get with it, people!

That's right, everyone's favorite advice columnist, Helen Gunther, is back with some new advice for you all. She's a crazy old broad, that Helen, and she sure knows her stuff: 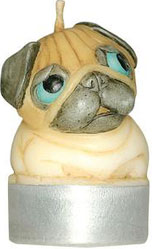 My husband wants to go on a dangerous expedition. I am so afraid he will never come home. He has always been an outdoor lover and has taken many trips but this trip will tax him maximally. People have died. He says he wants to go now before we have children. What can I do to stop him?

What will Helen tell this poor woman to do!? I know what I would tell her to do, but I am not an advice wiz such as Helen, so I have no idea what she will say! But you can read the column and find out!