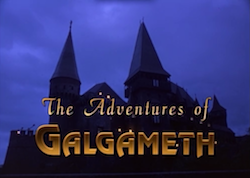 Overview: After his father/director King Beardo dies and an evil advisor usurps the throne, the world's whiniest teenage prince tries to save the day with the help of the ugliest dragon/dinosaur/Godzilla creature ever imagined.

The Case For: Overacting bit characters serve as a highly effective instructional video for how to get yourself banned from renfaires for life.

The Case Against: Watching this is like going to Medieval Times in Hell, and then afterwards to the hideous dinosaur strip club right across the street. 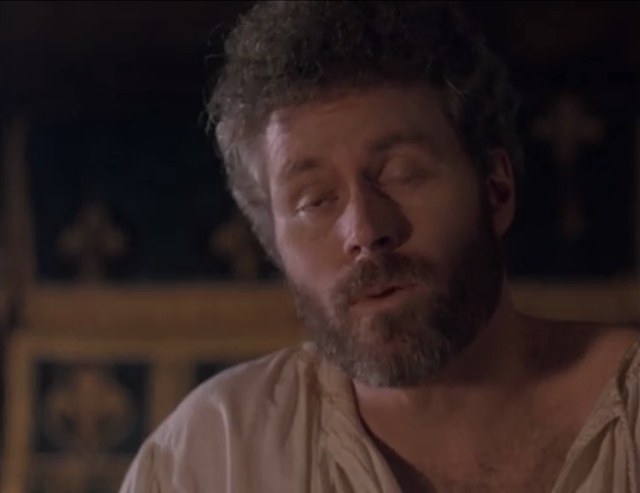 For most of the movies we review on here, we come in knowing mercifully little to nothing about their origins. In fact, for almost all of them we probably couldn't figure out much more even if we wanted to (we don't). Galgameth, however, is one of those rare jewels of weird obscure movie lore whose history you just can't gloss over. Even in the utterly insane, mind-scrambling abject bizarro world of Awful Movies, it's not too often you come across movies produced (read: commissioned at gunpoint) by Glorious Leaders like, say, Kim Jong-Il.

The story of Galgameth is really the story of two bad movies, the second being the rather more infamous Pulgasari on which Galgameth is, uh...based. Pulgasari was conceived as the North Korean answer to Godzilla - by 'answer' we mean 'ripoff' and by 'conceived' we mean 'the director was kidnapped on direct fucking orders from Kim Jong-Il to make it, thereby ushering in the golden age of North Korean Cinema'. Some of the original Japanese Godzilla team were brought in (including the guy in the goofy lizard suit) to 'collaborate', and the rest is history. That story has been told before, but apparently director Sang-Ok Shin felt there was some unfinished business after he finally escaped to America, and so he decided to write Galgameth, his second attempt at a movie ripoff of another ripoff about a guy in a dumbass rubber dinosaur costume stomping around on little toy models.

Unlike Godzilla, whose size is directly proportional to how pissed off Nature is at the latest nuclear-powered ice cap-smashing whaling boat to sail out of Tokyo's shipyards, Galgameth grows by eating big piles of metal. This was seemingly intended as a metaphor for the capitalist war machines being destroyed by the Glorious People's Army. Or possibly part of some radical PR campaign urging said Glorious People to start thinking creatively about ways to fill the increasingly gaping holes in their daily dietary offerings (the original draft about a monster that eats dirt hit a little too close to home for North Korean viewers).

Lord Curlyfries of the Duchy of Arby's prepares for battle.Speaking of eating dirt, also unlike Godzilla this movie is set in some generic medieval kingdom. This is a great idea, because giant monster movies are so much more entertaining when there are no cardboard buildings higher than three stories for them to smash through. The Enchanted Kingdom of Who-Cares-a-Lot is ruled by the ostensibly benevolent King Beardo, who like most good TV/movie kings is tragically assassinated in the first act by his sinister 'advisor' (a.k.a. really evil-looking guy whose favorite hobby is looming over the people he is obviously planning to murder). Unlike most of those kings, the weapon used in this particular savage murder is a moist towelette. We wish we were joking.

See, instead of actually ruling the kingdom - you know, dealing with those mountains of tedious scrollwork piling up in his sheeps-bladder "To Do" satchel, hosting feasts for his disgusting gluttonous family, squirting heirs and heiresses to various silly-sounding titles into his miserable teenage trophy brides/equally miserable secret wenches - this particular king prefers to play dress-up like a renfaire LARPer and do some rousing full-contact jousting with his developmentally-challenged playdough lump of a son, to show everyone what a great guy he is. On one such occasion he suffers a mild manboob flesh wound, providing his evil best buddy with the perfect opportunity to ice him by poking him in the tit with some magic bubbly tit-poison on a towel, a maneuver that tied for 2nd in the "World's Wackiest Regicides" semifinals with Claudius and his ear potion.