Garfield Cooks Up Trouble is the most dangerous, offensive, book I've ever read. It's racist, ableist, homophobic, and is written with no marginalized people in mind. This is a screed of hatred and it must be called out. 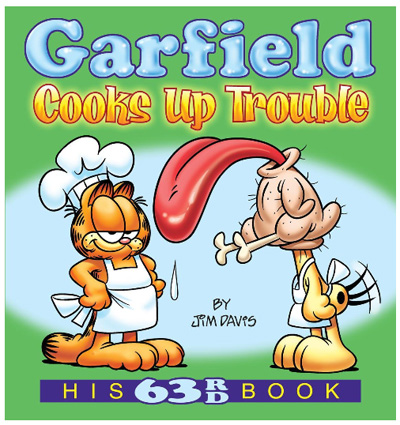 Before I get into my 100,000 word review about why the 63rd Garfield book is so toxic to our culture, I would like to take a moment to address the defenders of Jim Davis and this particular Garfield collection. Yes, I read the whole thing. Yes, I understand that it's supposed to be a story poking gentle fun at the laziness and selfishness of an obese cat. But here's the thing. Garfield never learns. He has no arc. After 96 pages he was still talking about lasagna, mocking Jon Arbuckle, and being abusive to Odie and Nermal. Every page is filled with the most vile hatred and vitriol I've ever seen from a protagonist.

This book was ultimately written for white people. It was written for the type of white person who owns several coffee cups with jokes about needing their coffee in the morning. It was written for the white people who have a kid named Tyler or are a kid named Tyler. The sort of white person that considers themselves to be not-racist even though they like Chalupas. This book holds no regard for the feelings of marginalized people. Not once does Garfield have a conversation with a person of color who is not a worker at a business and thus reduced to servants. Not once does he take Nermal's intersectional politics about class and race seriously. Not a single trans role model appears in the entire 96 pages of the book.

Yes, I am white, but that has nothing to do with being offended on behalf of other races. It's heroic that whites call out our own bigotry. Black people would be offended, but they would never read Garfield. Because black people don't like Garfield. They like Boondocks. I have two black friends who never read Garfield. And I am doing this review for them and for all my trans friends, Asian friends, Native people, the people of Abu Dhabi, Italians (from Italy not Italian Americans), Pacific Islanders, and anyone else who might have been aggressed against by Garfield.

Take off your white people glasses and read that strip again. It is Garfield afraid of the rise of black strength, a direct broadside delivered against Black Lives Matter, and one of the most disgusting things I have ever seen in my life supporting police oppression as part of a system only one step removed from slavery. Way to go, Garfield. The KKK would be proud.

Garfield is clearly a part of pick up culture, using a filthy sock to attempt to pick up women. Or should I say, in the infantilizing terms of the comic itself, pick up girls. Revolting and possibly the most cruel and toxic thing I have ever seen with mine own two eyes. This is why women have to be afraid of being killed by men on Tinder. 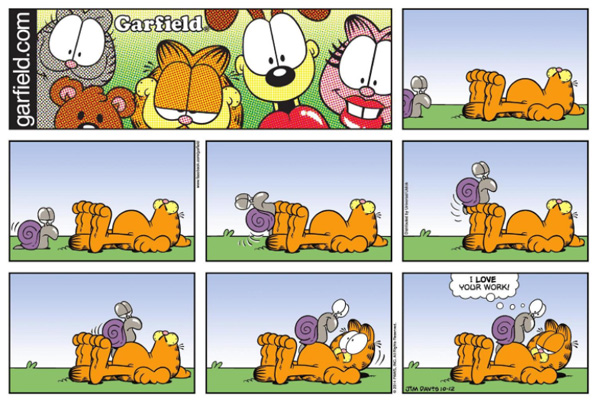 A snail? A fucking snail? 68 years of Garfield and trans people finally get representation and it is a snail. I'm sorry, this is too much. It's dangerous and being used to self-congratulate Garfield for being an ally even though he only just became one and I am 10 times the ally he is just for writing this article. Fix your heart or die, Garfield.

I will update with issues #4 - #7,842 tomorrow at some point. In the meantime, please go onto Twitter and begin to reduce Jim Davis to a goblin of hatred feeding upon the dark id of our culture. It is crucial we take a stand and show our support for people being hurt by this book. The blacks and the trans are especially upset by Garfield. Trust me.