Normality In The Mid-90's

When you buy a modern PC game, you pretty much know what to expect. Every genre has been refined to the point that the player has little room to experience any real sense of discovery. There are occasional innovations, but for the most part it's just a matter of which property is plugged in to the formula and how well the elements are executed.

Things were a little different in the early-to-mid 90's. Randomly choosing a box from the shelf of your local Babbage's might have netted you a standard RTS, but you were just as likely to discover an FMV-laden adventure game about Dennis Hopper opening a detective agency in a cyberpunk version of Hell where all disputes are settled via hoverbike races. Co-starring Malcolm McDowell as one piece of seemingly innocuous furniture hidden in every screen.

That's not to say that the games were better than they are today. The hit-miss ratio was probably abysmal. In a way, though, the element of surprise made up for the misses.

Although I never played it, Normality has come to symbolize this era in my mind. Everything about it screams "weird 90's PC game", starting with the box: 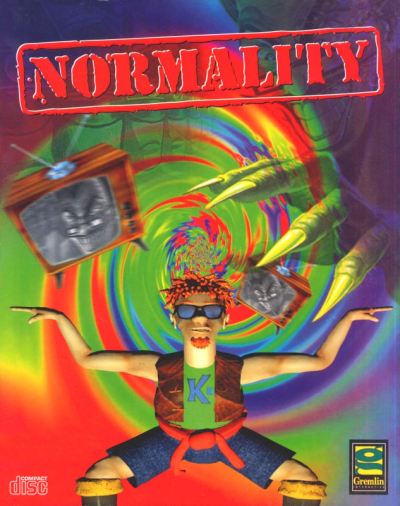 You've got the ultimate misguided approximation of grunge. He's doing an Egyptian dance, as grunge mascots are wont to do. An early Andrew Ryan is broadcasting his nefarious message to whatever audience inhabits the sweet rainbow abyss where televisions don't need power cables (but only broadcast in black and white).

What kind of game is this? Who knows! The box doesn't convey what you're getting, but it does tell you that you're probably too square to handle it.

Let's see if a screenshot will help us figure out what Normality is all about. 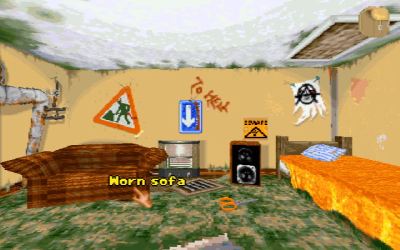 Of course, a first person adventure game with anti-authority overtones and worn sofas. The summary states that Kent Knutson (voiced by Corey Feldman, naturally) resides in Neutropolis, a city in which fun is outlawed. He was recently jailed by the Norms (the police) for whistling a happy tune. Now Kent must locate and join a resistance group to save the city from dullness.

This was an actual game.

Do you know of any weird or impenetrable PC games from the 90's that couldn't possibly be released in today's market? Let me know and I'll see if I can work it into the round-up of oddball games that will be featured in the next installment of VGA.

King's Bounty: Armored Princess
Improves on the original in many ways, at the expense of available materials that would have made the princess' cleavage and panty armor much more modest. 8/10

Gyromancer
PopCap fell back on their innate ability to steal others' work by copying the Puzzle Quest formula and tweaking it for the worse, then SquareEnix topped it all off with the same uninspired visual style they've dusted off every few years since Final Fantasy VIII. 4/10

Gratuitous Space Battles
Amazing, but it could use more gratuitous ship/item tooltips. 7/10

Tony Hawk Ride
Historians will note the trajectory of the Tony Hawk series as Amazing->Wearing Out Its Welcome But Still Decent->The Moment People Bought The Modern Equivalent Of The Sega Activator And Realized That Maybe Peripherals Were Still A Pretty Lame Idea On The Whole, Canceling Their Preorders For Natal And The Wii Vitality Sensor. 1/10

Assassin's Creed II
Lives up to the hype that surrounded the first game, now let's hope the third game doesn't live down to the hype surrounding this game. 8/10

Dragon Ball: Raging Blast
I don't know how they manage to keep cranking out Dragon Ball games of such a consistent quality. 3/10