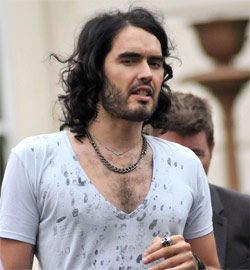 Alternate Reality 09 – Beheaded in propaganda video for the ultra-liberal anti-Taliban, known in this reality as brutal critics of the arts.

Alternate Reality 10 – Driven over by Ricky Gervais’s Hummer limousine and Gervais wasn’t even in it at the time.

Alternate Reality 11 – Threw a boomerang during a visit to Australia. Forgot he’d thrown it and was killed days later by the returning boomerang while on the toilet. Body discovered months later in a mummified condition.

Alternate Reality 12 – Known as the baby reality because everyone stops aging at two years. Russell Brand was one of the millions killed in the endless war against the baby empire of the Ottomans. His entire unit of Her Majesty’s Royal Wee Hussars was suffocated by their own drop-side crib.

Alternate Reality 13 – Suicide by Swiss Guard while visiting the Vatican.

Alternate Reality 14 – Drunkenly boasted, “Watch this!” and missed the pool.

Alternate Reality 15 – Homeless and drug-addled, Brand mistakenly ate rat poison while scavenging for half-emptied mayonnaise packets behind a White Castle in Fort Wayne, Indiana. He was refused treatment by the ultra libertarian hospital and was left to die on a park bench. 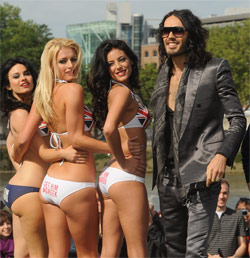 Alternate Reality 18 – Unlimited NASA funding in this reality has allowed mankind to colonize Mars. Thankfully, the terraforming was incomplete when Brand was thrown onto the surface and he experienced an agonizing, eye-popping death.

Alternate Reality 19 – Brand, an avid footie fan (go West Ham!), was slashed in his face by a broken bottle wielded by an Arsenal fan’s five-year-old daughter. Returned home from hospital so badly scarred and bandaged his mother mistook him for a Pakistani sex fiend breaking in and shot off both barrels of a shotgun into him. Brand survived with most of his face gone, but later died during a full face transplant from a dead woman.

There may be other realities we have not yet imagined. We struggle to conceptualize mind-bending Escher trails of Brandian geometry, pubic beards recursive, trashy unhilarity to an infinite horizon. If there are still more Russell Brands left to give our reality’s Russell Brand even more power, well, god help us all.