Bear with us this week as we review a terrible reboot of the Lone Ranger franchise and a woefully disappointing Despicable Me sequel, because The Bling Ring is worth the wait.

EXPECTATIONS: Generally speaking, I'm a fan of Gore Verbinski's work. For what they are, his Pirates of the Caribbean films are a ton of fun, and Rango might well go down as one of the best animated films of the decade. I'm hopeful, then, that The Lone Ranger is better than the negative buzz suggests. If nothing else, the action ought to be awe-inspiring. I'm ready for a film to inspire me with awe this summer...

REALITY: The Lone Ranger is the worst movie about trains since Atlas Shrugged. For all of Johnny Depp's bizarre Tonto shtick and the dozens of twists and turns in the plot, The Lone Ranger just can't seem to find a decent groove. The cast members are game for whatever Verbinski can throw at them, and the action scenes he builds are nothing short of spectacular, but everything in between is a minefield of missed opportunities, wasted potential and just plain awful storytelling.

The year is 1869, and clean-cut lawyer John Reid (Armie Hammer) accompanies his Texas Ranger brother Dan to arrest outlaw Butch Cavendish (a nearly unrecognizable William Fichtner). Their team is ambushed in a canyon, and Reid is left for dead. Rescued and nursed back to health by an oddball Comanche warrior named Tonto (Johnny Depp), Reid sets out to bring Cavendish to justice. With Tonto at his side, Reid dons a leather mask and becomes the titular Lone Ranger, the only man capable of stopping Cavendish and his gang from provoking a war between the Comanches, railroad tycoon Latham Cole (Tom Wilkinson) and the U.S. cavalry. 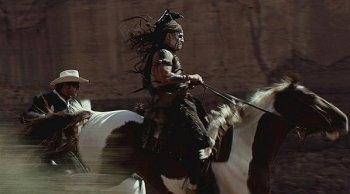 So is he the sidekick or what?Because all this might seem too straightforward for modern audiences, the entire thing is book-ended by a maddening framing device set in a 1933 carnival. Here, an ancient, leather-faced Tonto tells his story to a kid in a Lone Ranger costume. Every twenty minutes or so, the kid pulls us out of the movie to ask dumb questions and poke holes in Tonto's story. This kid is clearly meant to be a stand-in for modern viewers who try to out-think the movies they watch, and he's every bit as infuriating as they probably wanted him to be. His only real function is to allow the film to double back on itself and show us an explosion from two different points of view. That's kind of a microcosm of the entire film; it goes through a lot of narrative footwork for practically no payoff.

In fact, this entire movie is just hat-on-a-hat strange. In the first hour alone, we get a carnival featuring Tonto living in a museum exhibit, a train robbery that ends in all the main characters meeting and trying to kill one another, a villain cutting out and eating a man's heart, a prostitute with a leg made of ivory (Helena Bonham Carter, because why not), and Johnny Depp constantly arguing with a horse and feeding peanuts to the dead crow stuck on his head. Any two of these things would have been enough to win the "Pirates Fan Seal of Approval," but the film never stops piling on the weirdness. By the time the final action set piece gets underway, The Lone Ranger has already derailed itself and crashed into the ravine where all terrible trainwreck analogies go to die.

Even before we get to the notion that there are shady dealings afoot in the railroad business, the film introduces the concept of mining for cursed silver. Depending on the scene, this silver either does or doesn't turn whoever it touches into cannibalistic madmen. It seems to want it both ways, on one hand as a metaphor for greed, and on the other hand as an excuse to include a pack of ravenous CGI rabbits. So many supernatural elements leak into the story before the main conflict is finally revealed that it's hard to tell which angle the film is going to play at any moment. It feels like a Lone Ranger movie with a terrible Halloween episode of "Hell on Wheels" edited in just for kicks.


It's a shame that the year's best action sequence takes place in the year's worst action movie. As two trains meet for the completion of a transcontinental railroad, one train is stolen, forcing the other train to give chase. What follows is a tour de force of action choreography as the trains careen through the wilderness in a breathtaking display of gunplay, horse-riding and Johnny Depp posing for no reason. For fifteen glorious minutes, awkward character alliances and poorly defined motives give way to stunning action. This is why people hire Gore Verbinski to make their movies.

This is also the point at which the William Tell Overture takes over the soundtrack and refuses to let go. That music goes a long way in turning the finale into something fun; more fun, in fact, than the entire film that precedes it. The Lone Ranger is a grim, often depressing film about the greed that all men share, with a grasp of race relations that's tenuous at best. What this iconic piece of music returns to the film is the sense that it's okay to enjoy a good chase scene just for the sake of it.

And yet, at almost every turn, the film seems to be mocking us for wanting to enjoy it. Tonto frequently puts Reid down for not being the partner he had hoped for, effectively saying he's not good enough to be the Lone Ranger. Whenever Reid manages to succeed, Tonto looks surprised and then calls it luck. Why is the heroic lead trapped playing comic relief to the comic-relief character who thinks himself the hero? What the hell is going on here?

Then there are the moments where the kid in the framing segments openly calls out Tonto's story for being ridiculous. The film pokes fun at itself so we don't have to, but it seems kind of pointless when the film works so hard to win us over. Who thought any of this was a good idea?

MINORITY REPORT: This is what happens when an extremely successful actor and movie star gets a bad script and a lofty offer: He chances his arm. "I don't want to play the lead, I want to play his sidekick... but, I want you to make the sidekick the actual lead." Christian Bale did it on Terminator Salvation. I reckon there are agents out there now recommending that tactic to their most prolific clients. - Ian "Professor Clumsy" Maddison