Somewhere in the pacific northwest a long and winding road has been swallowed up by gnarled roots and outstretched limbs that block out the sky with plump, greedy leaves. If you were to seek out this claustrophobic stretch of two-lane blacktop (which, really, you shouldn't) and follow it to its very end (which, really, you couldn't), you would find yourself at a breathtaking viewpoint atop a majestic valley that cradles an awful, horrible town called Consolation. 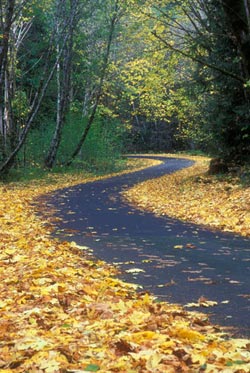 Consolation cannot be found in any atlas, pinpointed on any GPS device, or reliably navigated to with MapQuest. The latter makes it pretty much like any other destination on Earth, but the former qualities hint at the forgotten town's true nature.

At first glance, Consolation looks like something out of a 1950's sitcom. Scattered farmlands on the outskirts of town, rolling suburbs circling a tiny Main Street composed of mom & pop antique stores, a diner, a hardware shop, a grocer, and the town's only gas station. Let your eye linger, however, and soon you'll notice the broken bodies littering the streets, the strange flags planted in the center of each rooftop, the burning vehicles that go unnoticed as fat tendrils of onyx smoke seep up into the air.

Two unusually large houses sit facing each other across the length of Main Street. Each structure is patrolled by armed guards and reinforced with stacks of unusual building blocks - empty cans of Turtle Wax for the house on the west and Samsonite luggage for the house on the east.

In the house of wax, a thin man in his late 50's stands with his hands clamped behind his back. He is wearing a tan suit with dark brown patches on the elbows and a black bow tie, his white hair neatly parted to the left. The upstairs study he stands in is littered with books and strategic maps, and not much else. No family photographs, just a poorly painted self-portrait (sans white hair) on the set of Super Password as Charles Nelson Reilly misses the clue that will forever seal the fate of one town. Vivaldi's The Four Seasons spins on an old record player.

The white-haired man watches as a small group of his men flee from the hardware store just up the street as an unseen assailant pelts them with molotov handbags. Though they are fully covered in suits of armor made from superheated Turtle Wax, his men lack the nerve required to stand their ground. At this rate, all of Main Street will be lost within the week, and the white-haired man will have no option but to hunker down and fall into a defensive position like... some sort of animal that's known for protecting itself.

His men understand that as long as he lives, the lifetime supply of Turtle Wax will continue to flow. Their reliance on the invaluable resource will keep them fighting until the very end. A siege could be held off for months, maybe more than a year... but not indefinitely. Something must be done now. Something unexpected.

The white-haired man rubs at his weathered eyelids, then returns to his maps.

On the east end of Main Street, the Bastard stands in the top floor of the Samsonite house. As always he is naked, his sweaty palms flat against the floor-to-ceiling window, whispering his neverending mantra as he stares at the white-haired man's distant form.

The room is bare. There is no trace of the opulent lifestyle that his lifetime supply of luggage provides for his followers. For him, it only serves as a reminder of his failure. This time, he will not come in second place.

His second-in-command enters the room.

"Sir, we've taken the hardware store. Ivan damn near ingested a quart of T-Wax when he stepped into one of their traps and Roman lost a few more toes, but they're in good spirits."

No answer. Never an answer.

"Whammy," he croaks as his toes dig in to the urine-soaked carpet. "Whammy."

In a musty barn on the outskirts of town, the sheriff stands over the bodies of two missing men. One belongs to the Bastard and the other to the white-haired man, but they did not do each other in. No, it appears their hands were tied behind their backs as they suffocated in some sort of pie. Boysenberry, from the looks of it.

The sheriff recalls that the boys he found last month succombed to pecan pie. The month before, cherry. A newcomer is clearly making his presence known. He's getting one pie each and every month and is making the most of it.

"God help us all," sighs the sheriff, tipping his improvised Samsonite briefcase hat back on his head and spitting a wad of Turtle Wax chaw on the sawdust.