Blue Stripe - The Life and Times of a Harkonnen Florist 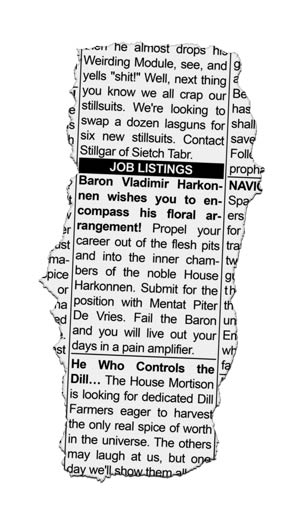 A beginning is a very delicate time. Know then, that it is the year 10191. The planet Giedi Prime is ruled by Baron Vladimir Harkonnen, an obese lunatic that looks like he's been frying in a skillet for half an hour.

His two nephews are always lurking nearby. One of them, appropriately named The Beast Rabban, is a towering halfwit that eats raw meat and bites women's faces for pleasure. Feyd-Rautha is the other, and he is a prancing idiot savant prone to walking around nearly naked and covered in grease. The House mentat is a sniveling human snake with giant eyebrows.

The rest of us live together with them as one big happy family in the immense and sunless cities of Giedi Prime. We're just breathing polluted air and wishing we were somewhere else.

My therapist told me to be less negative and I told him I had cancer. I don't really have cancer it was just a spontaneous reaction. Based on the rash in my lung I think it was phosgene. I react very poorly to that. Allergies.

He's right though, the last time someone came back negative on one of the Baron's tissue graft tests he flayed the poor schmuck's face off and fed him into a meat grinder. I asked what happens when you come back positive and the guards said the same thing but you get to wear a ribbon.

Oh, yes, Giedi Prime is a wonderful place, doctor. Marvelous. I am just trying to save enough money to buy my vacation cottage on the shores of Lake Molten Thallium Effluent.

I'll introduce you to my three beautiful children I conceived there. They are very convenient, they come stuck together and they share a face. You only have to say hello once.

Sorry, sorry, sorry, now I'm being sarcastic. I'm always apologizing for my bad behavior. Just yesterday I made a total fool out of myself when I caught my heart plug on my jacket's zipper and nearly exsanguinated myself all over a House trooper. Luckily, he was there to throw me off a balcony onto a passing bus and laugh. Without his soothing cackle I don't know how I would have found my way out of that predicament.

The name is Eugene Glukklik. I have been a florist by trade on Giedi Prime for nearly twenty years now and the personal florist of House Harkonnen for almost a whole year. That's like a million in cat years. I'm beating the odds! There's you're positivity, Doctor Snorg. 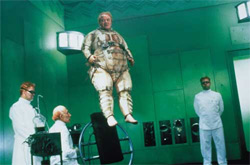 You try adding floral accents to a planet like Giedi Prime.I own a very modest floral arranging business here in The Barony, the capital city of Giedi Prime. It's just me and my two humble assistants Rekko and Rhayt. They're brothers and I use them as intermediaries when dealing with the Baron as much as possible. As you might have surmised from my earlier comments, the Baron is not a kind soul.

Kind souls do not tend to flourish here. They tend to end up in the slave pits or sprawled on a table at a banquet hall. No, the Harkonnens are not cannibals. Well, not that I know of, although I admit the possibility. In fact, I admit the likelihood. They are probably cannibals.

Where was I? Oh, yes, as the Baron's personal House florist it is my duty to prepare floral arrangements for all ceremonies, festivals, occasions, affairs, scourgings, mutilations, mass-beheadings, that sort of thing. When the Baron travels I must travel with him, for he needs the grandeur only a fine arrangement of Harkonnen lotus blossoms and dead baby's breath can offer.

He is such a charming man. The way his face weeps ichors down his breasts, it is hard not to want to please our beloved Baron.

I give to you this document of my work in recent days with the understanding that it never reaches the eyes of a single person in the Imperium. You take it to wherever you choose, but if it finds its way back then I hold you accountable. Find me an amusing man if you wish, but I assure you I have very loyal family members not fond of kanly. They will make the Baron's pain amplifier seem like a hot stone massage.