Cleaning Up After Your Dog and Other Acts of Cowardice

There are two types of cats: cool and lame. When you're at a friend's house, one of her cats comes out and lets you pet it while the other awkwardly sneaks into the room only to get freaked out and run away when you twitch your foot or lift a cup to your mouth a little too fast. You're probably the second one in human form, and you need to know that no one likes an obnoxiously wussy dude. I know you probably think that if you were in a war, you would do something brave like jump on a grenade, and I don’t want to ruin your imagination, but how do you expect to do something that powerful when your cowardice permeates your every move? Maybe you should try following these tips and not do any of the following. 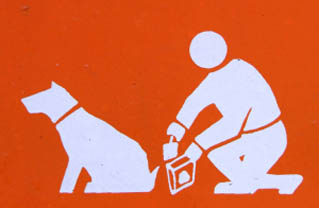 Clean Up After Your Dog

Your dog wanders around the sidewalk and grass strips, and, whenever it wants, it squats and shits. Then as the dog continues smelling walls and garbage, you, the loser, bend over and pick it up. You wrap your feminine fingers around the steaming turd with only a thin grocery bag separating. While you follow behind the beast, the bag, weighed down with shit, dangles from your hand. Strangers will see you, your dog, your bag and know that you are holding a sack of feces. If they were stupid, they would think the bag was filled with gummy bears or a few empty Dr. Pepper cans, but they aren't, and now you're recognized as a shit holder.

Of course, picking up after your beast isn't cowardly, it's just pathetic. No the cowardice rests in your intention. You clean it up to not upset anyone. God forbid that some poor soul step on the toy turd from your toy dog. Are you really that scared about what other people think? You should first contemplate the fact that the this might be your only way to affect someone's life. It isn't much, but it's all you got. Think of your dog's shit as a business card, and whenever some dweeb steps in it, it's really just you saying "booya, nice doing business with you." If they give you a nasty look, just remember that you aren't the one with shit on your sneakers. If leave the mess and no one is around to step on it, that's fine. Leave it be. Later that night, just think of the kid who'll spend twenty minutes trying to scrape it off against a tree or some grass while you sit inside, taking sips of a gin and tonic and doing your best Mad Men impression.

Possible Solution: If you are uncomfortable leaving the feces, collect it anyway. Save it in a bag outside your house. Then, at the end of the month, dump it all in front of the library. Not only are you condensing a month's worth of masculinity into one event, but you're ten times more likely to have some pathetic loser step in it.

Your itty bitty tummy can only make it half the day before calling "time out"? Does a madator take a break while the bull charges around? No. He fucking gets in the ring and doesn't stop until the beast's spinal cord has been severed with a sword. Now, use this metaphor for your "life," and the bull is your job at Staples. You should be able to go nonstop, but you can't even restock pens, can't collate memos, can't print off missing cat flyers without going into the back and eating your cold cut bullshit. Are you afraid of getting lightheaded? Should they install a fainting couch in case you don't get your PB&J?

You spent 80 bucks on a shirt that gets worn once a year when you can afford to attend a game. Congratulations, you pretty much bought a prom dress. Unfortunately, unlike the thousands of teens buying a prom dresses, your chances of getting laid is still at a flat zero.

Why do you wear a jersey anyway? You want to support a team without actually having to say anything? A jersey is the first base of supporting a team. Sure it's great for seventh graders, but aren't you ready to move on? You could blackout and drunkenly chant "Dee-Fence" as you jump on the bar or you can continue sitting at the Applebee's bar, silently fist-pumping whenever your middling college team scores. All I'm saying is that a better man will be recognized as a fan regardless of what he wears, but if you want to wear your Fruit of the Loom T-shirt, don't let me stop you

Possible Solution: A real man would carve the name of his team into the forehead of his rival, but you might want to start branding the logo across your pelvis.