Damn It Feels Good to Be a Caterpilla 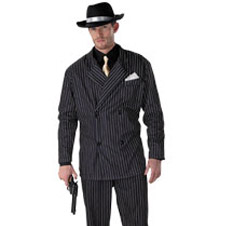 WARNING: Not all mobsters may look exactly like action figures.Way back in the year of our lord 1984 I saw a little movie called "Raiders of the Lost Ark". Despite having seen this movie, I developed an overwhelming urge to join the mafia. At that tender age I really didn't have a firm grasp on what being a mobster would entail, but I think it involved wearing pinstripe suits and slapping mouthy dames just before walking out a door and shooting a Tommy gun at a passing car. Even at six years old I had the in-demand skills of opposable thumbs and sufficient manual dexterity to hit moving women. I knew I could do my best for a shadowy and possibly obese mafia don, and while I might not have known that "clip" wasn't the name of a new GI Joe, I would have still aimed the gun and pointed it at the right person when the time came.

Imagine my surprise when, over fifteen years later, I was approached by a mysterious stranger. Much as I expected he approached me in an alleyway, despite the fact that I spend almost no time in alleyways, and offered me a nebulous position in the mafia. When I asked him what my job would be as a "made man" he informed me that it would be entirely up to me. I had carte blanche when it came to creating my Mafioso persona and I wasn't about to waste this opportunity. I thanked him and took my mobster kit, which consisted of a pinstripe suit, a Thompson sub machinegun, and hand lotion to keep my digits prim and proper for straightening out crooked dames.

I sat in the apartment I share with my beloved "dame about to get slapped" and contemplated what my hook would be. There are many different archetypes to choose from when selecting my mobster role, and I didn't want to jump into it without carefully considering all of my options.

Description: The Knuckle Dragging Thug is your standard mafia gorilla. With a barrel chest and a Cro-Magnon brow he looks about as intelligent as an Adam Sandler "Lunch Lady: Ultimate Remixes" CD. What the KDT lacks in smarts he makes up for in ability to yell, shove, and crush things in his giant simian hands. The KDT generally is equipped with either a baseball bat or gigantic pistol, both of which can be used as bludgeons.

Strengths: The ability to punch a hole through three human heads simultaneously, menacing walk, excellent view of the screen in movie theaters.

Inevitable Downfall: The KDT will meet its inevitable downfall in one of two ways. One possibility is that the KDT will become distracted by a beautiful woman who approaches him while on guard duty, completely ignoring a man with a personal vendetta who sneaks up behind him and shoots him in the back. The other option is that the KDT survives this encounter, having only been knocked unconscious, and is made an example of by the angry mafia boss.

Description: If you want a murder to send a message than the Brutal Killer is the right man for the job. He combines a ruthless and quiet demeanor with a love for killing in the most gruesome way possible. Some Brutal Killers utilize traditional methods of butchery such as meat hooks or pickaxes, while others favor more offbeat weaponry like coconuts, government pickle canisters, or traffic cones full of hot tar. Whatever their weapon of choice the Brutal Killer is sure to leave a bloody crime scene and a mutilated corpse in his wake.

Strengths: Ability to jam a traffic cone into a fighting man's ass and funnel it full of tar in less then ten seconds, excellent listener, not prone to gossip.

Inevitable Downfall: The Brutal Killer will be called in by the mafia don at great expense to take care of a loose end that has been causing the family a lot of trouble. Despite an impeccable record of hits this one will turn out to be anything but usual, and a hero with a personal vendetta will catch the Brutal Killer off guard and put a permanent stop to his efficient terminations. 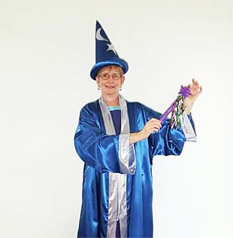 WARNING: Not all magicians may look exactly like children's librarians.

Description: Called The Magician because of his ability to hurl lightning bolts and summon winged beasts from the mists of time, this wizened mobster is generally seen sporting a pointed hat and robe emblazoned with mystical symbols such as moons, stars, and ponies. Lightning bolts and dragons are not the only tricks up this hoodlum's sleeves; he also carries a number of potions and magical rings that can prove to be more than a match for a steady gun.

Strengths: Ensorcelled rings, the ability to levitate and shoot lightning bolts, a dragon who is bound to a necklace or pendant, excellent sense of smell and smart wardrobe selection.

Inevitable Downfall: The Magician will meet his doom when a hero with a personal vendetta tricks him into drinking whiskey and causes him to explode. Another possible downfall would be an unexpected rain shower.

Description: Granting wishes is all in a day's work for The Genie. This buff bad guy makes his home inside a magical lamp safe house on the mafia don's desk. Whenever the mafia don finds himself in need of supernatural assistance he turns to either The Magician or The Genie. While the Magician can hurl a mean lightning bolt, nothing he brings to the table can quite match the Genie's ability to grant any wish. From causing the don to win in high-stakes poker to conjuring nubile dancing nymphs, the Genie is the don's go-to guy. The Genie also has a habit of making things difficult by mischievously granting wishes in the most literal sense possible. An order from the don to off an enemy by "blowing him sky high" might result in the Genie performing oral sex on the moon, while a drunken wish for a "million dollars" might land the don on the moon.

Strengths: Can grant wishes, extremely shiny pants, can fly with the assistance of a magic carpet.

Weaknesses: Tendency to include teleportation to the moon when granting wishes, lives inside an easily broken bottle, lack of shirt makes him susceptible to the elements.

Inevitable Downfall: The Genie might be defeated by a hero with a personal vendetta, but chances are he will be defeated by the dons housekeeping service. They have a tendency to place anything that isn't nailed down or too large in the dishwasher. The Genie's fate will probably be drowning at the hands of a Maytag Model-540, his silken pants and curl-toed shoes reeking of lemon-scented detergent.

After carefully considering all my options I discarded my mobster starter kit, disappointed that any path I would choose to follow in the mafia would lead to my inevitable downfall. While my dreams of becoming a mobster were prematurely crushed by my incredibly logical mind, my dreams of becoming a caterpillar were just beginning to take shape thanks to the radioactive butterfly which laid its eggs in my ear canal. But that's a story for another day!

Something Awful Versus Nigeria And / Or Asia

Most people who actually check their e-mail are more than a little familiar with that Nigerian scam mail that has been going around for a couple of years. You know, the one where they claim they desperately need your help to deposit millions of dollars into your bank account. Grandmaster of Something Awful Lowtax took it upon himself to spend a little bit of time corresponding with the good folks in Niger/Asia/Jupiter running this scam in possibly the best e-mail prank I've ever seen. 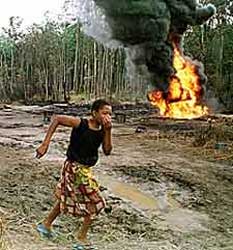 Please inform me as to what I need to do next to claim this impressive amount of money. I can fly down to Nigeria if you wish, as my parents own a small airline chartering service which has provided transport for such famous celebrities as Rutger Hauer, Mack Hail, and the guy who played Hannibal's stunt double on "The A-Team." I have no problem lending you the money needed to help you out and make the big bucks for this. Ever since I refused to buy stock in EMC when it was at 80, my parents have been mocking me for my poor business sense. After I get that check for $52 million in my account, we'll see who's laughing then! It will be me! Laughing at them! Because I'll have enough money to kill them off like nine times each.

If you enjoy mocking scam artists as much as I do then take a ride into insanity with Lowtax and the good Doctor Ben Chumas in this epic e-mail prank. I give you my personal pledge as a member of the Screen Actor's Guild that you will not be disappointed!