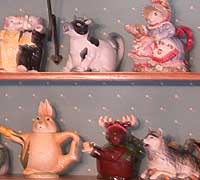 My mother collects teapots that look like animals. She has well over a hundred and fifty of the dumb things on shelves scattered throughout the house, and wherever you walk you are struck mute and useless by the multitudes of cold, dead, soulless eyes peering at you from the edges of the rooms. She never uses these teapots, rather, once per month or so she ritualistically takes them off of the shelves and cleans them, making sure that there is no dust or dirt to be seen and also that her children did not do something so terrible as to chip or break one of the little bastards and not tell her about it.

She started this charming hobby in roughly 1995, and with the powers and help of amazingly difficult and complex mathematics I gather that over the past seven or so years she has spent about $25,000 on teapots, if not more. For those of you that don't really know the value of the American buckeroo, that means that she could have easily purchased:

A fine brand of automobile (one made in the US of A #1, of course)

50,000 of those little prize eggs from the machines with the talking chickens (don't tell me you don't know what chickens I am referring to. You know very well)

3571 pies of whatever variety she could have wished (that's 510 pies per year, holy bejesus that's a lot of pie) 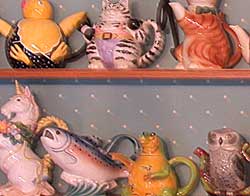 As long as I have known my dear old Mom, I still have no idea whatsoever what drives her to do this. We can't go shopping or even out in public without her having to "do a quick look and see if 'they' have any teapots," which usually entails wandering aimlessly around the housewares section of department and specialty stores for hours at a time until I finally break something and we are asked to leave. Additionally, I am never quite sure who 'they' are but I truly with that they would fall off of the face of the world into a great abyss of death and while there be temporarily inconvenienced to the extent that they do not make any more fucking teapots for my Mom to buy.

I really hope that the collecting that my Mom does will be limited to teapots because I know that it could be worse. She could collect any number of terrifying things from clowns to old donuts to antibiotic-resistant strains of Chlamydia. She scared me the other night by saying something along the lines of,

"You know, if I just let myself, I think that I could really start collecting dolls. I love dolls." 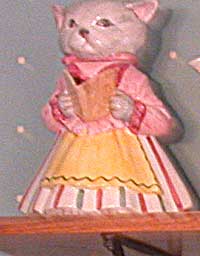 Oh good, that is just wonderful, Mom. Teapots are more than adequate, thank you. At least they are not freakish humanoids dressed in cowboy outfits or made-up like painted whores or diapered like idiot manchildren or bedecked with an elaborate wig of human hair. Most of them aren't, anyway. I am glad that I don't live at home any more because the urge to smash the things to very small bits is almost overpowering these days.

Part of my incredulity over the teapot-capade revolves around the fact that I have no idea what drives people to obsessively accumulate many of one item to such a great extent. Whether it be stamps or baseball cards, the hobby of collecting is completely alien to me, and I have never been able to collect anything, even when all of the other girls had enormous albums full of unicorn stickers and I just had my trusty Playtime Fun-Stick and a can of WD-40.

I do know that if I had a spare large amount of money and that my brain was short-circuited in that way that I would begin to collect large stadiums and name them Brad, Bruce, Todd, Chad, Brent, and Steve. After that series of names had been used I would begin adding the number two to them to create Brad 2, Bruce 2, etc. In this way people would understand that they should never name their children these names and every time I secretly took a dump in the bleachers I would feel as though I were finally making a difference in the world.

I am actually pretty happy that I don't have a hobby that involves collecting things. Not only do I not care about anything, which would make collecting anything a little tricky, but to spend all of that energy on purchasing and taking care of the same sort of thing would be pretty draining and even detract from my liking of that thing. When I ask my Mom why she does it she always replies with some variant on "I just like teapopts," but I like ice cream and I am not about to build special freezers all over the damn place so that I can store hundreds of brands in my house and not eat it. My collection of bacteria found on old hot dog buns discarded by John Madden is another story.

When I was in Health Class in Junior High or something that made us discuss vaginas for credit, our teacher showed us videotape of a woman with severe schizophrenia. The woman collected boxes of all shapes and sizes, just in case she needed a box for something. She lived alone, and filled the basement, her dead husband's bedroom, and the kitchen with boxes. Now, comparing the box-craze with that of collecting other trinkets, I much prefer the crazy bat with the cardboard to baseball card, coin, doll, VD, and other collectors.

This is because the boxes are useful, they are inexpensive, and they aren't full of people's or animal's faces and cold, dead eyes. They don't revere people for their financial or social achievements. They are not pretty. And for chrissake, you cannot show off your collection in any way that interferes with my life. Sure, boxes would have to be stepped around but I wouldn't have to watch my every move for fear that I may break something (oh, say for example, a teapot). Plus that crazy lady was pretty funny because hey, she was so damn crazy she collected boxes, dude.

I am glad that I am not one of those collecting people but at the same time it has been very interesting to observe one. It has made me realize what I don't want to be and what I must avoid at all costs. It has also given me brilliant ideas for spending large sums of money. Maybe when I get big my thoughts on this matter will change, but I rather doubt it. And I'll collect the hell out of anyone who says otherwise.