One of the biggest blockbusters of the decade, The Avengers, turns out to be a political hot potato that Ian "Professor Clumsy" Maddison is reluctant to handle. For moral support, he has Joseph "Jay Dub" Wade playing it Safe; Martin R. "Vargo" Schneider exploring Being Flynn and engaging in a Five Year Engagement; and Sean "Keanu Grieves" Hanson trying his best to Think Like a Man.

EXPECTATIONS: The hype surrounding this film is absolutely ridiculous. Having churned out all the relevant films to establish just enough to justify getting this off the ground, Marvel has finally done it! They've concocted a film that stars not just one superhero, but every single superhero from all those films I didn't like the first time around. Oh, joy of joys!

REALITY: I was not at all surprised to find myself not enjoying The Avengers anywhere near as much as the rest of the world seems to be. It's almost as though The Avengers is taking great pains to explain the current superhero phenomenon and recruit me along with it, but the whole thing left a sour taste in my mouth. The thing is, as much as I disliked The Avengers, I get the feeling that The Avengers didn't like me much either. 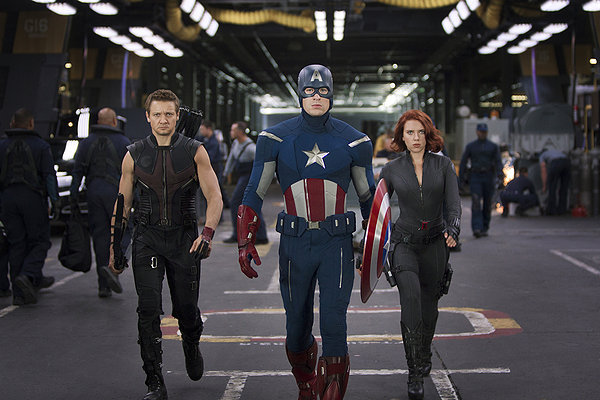 Assembled like a knock-off Lego set, it's The Marvel TM Avengers TM!

Agent Nick Fury (Samuel L. Jackson) of S.H.I.E.L.D is overseeing research being carried out by Dr. Erik Selvig (Stellan Skarsgård) and Clint Barton a.k.a: Hawkeye (Jeremy Renner) on something called the Tesseract, which is supposedly an energy source that opens a door to the far reaches of space. When Asgardian God Loki (Tom Hiddleston) appears from thin air, brainwashes Selvig and Barton and steals the Tesseract, Fury decides it is time to Assemble the Marvel TM Avengers TM and so recruits Natasha Romanoff, a.k.a: Black Widow (Scarlet Johannson); Steve Rogers, a.k.a: Captain America (Chris Evans); Tony Stark, a.k.a: Iron Man (Robert "Flubberty-Druthers" Downey Jr.); Bruce Banner, a.k.a: The Hulk (Mark Ruffalo); and Loki's brother Thor (Chris Hemsworth), to save the world from some aliens who look like mummified manatees.

The Avengers gets bogged down right from the start by sheer virtue of the amount of protagonists it tries to balance. It is perhaps in the favour of writer-director Joss Whedon that he takes such pains to give these characters as much room to breathe and interact as possible. Unfortunately, this leaves us with a lot of lengthy dialogue scenes in which these super-powered beings talk about themselves. Banner is the worst offender as a character who constantly bangs on about "the other guy" and how he controls "the other guy" and how "the other guy" is dangerous and could do a lot of damage if he were to ever show up. Removing the assumption that the audience knows who the Incredible Hulk is makes all of this bizarre. They just never establish it outside of dialogue, and "the other guy" doesn't make an appearance until the end of the second act. That's wasteful storytelling. 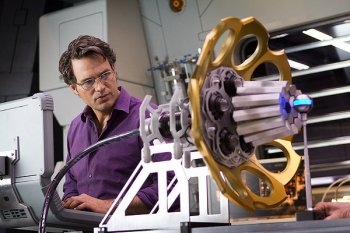 I really don't know what it's supposed to be, but I'm sure it's vital to the plot.The main side effect of all of this is that it makes the film feel very static. The plot simply dozes off in the back seat while all the protagonists argue amongst themselves. We don't necessarily need an intricate plot to make a film like this work, but we do need forward motion, and The Avengers spends a long time without any. The reason for this is that Loki is a boringly inactive antagonist. After some evil shenanigans in the first act, he goes on to spend most of his remaining screen time either locked in an inescapable cell or hanging around a New York apartment waiting to be pummeled by the Saturday Morning Super Team. It's a shame because Hiddleston is definitely game for some scenery chewing, but there's just no scenery for him to chew. He doesn't do anything!

Don't get me wrong, I often enjoy films in which very little happens or that take place in restrictive settings, but The Avengers just falls so far short of what it sets itself up to be. This is an action/adventure movie that takes us to such exciting locales as a museum in Germany, a forest somewhere, an airship of some kind (where most of the film takes place) and a very small area of New York. The forest is problematic enough in itself, as two ludicrously powerful men punch each other through various trees and rocks, causing massive devastation to the local tree and rock populace. At the end of the fight they survey the scene and see that they did indeed destroy a lot of trees and rocks. This is perhaps a forewarning for the innocuous nature of the entire third act.

Let me tell you, it's a good thing that Loki's alien invasion happens on a day when nobody was out and about in New York because that would have made for some intense and exciting action. Instead we get a whole lot of cars and lamp posts getting leveled, causing massive devastation to the local car and lamp post populace. The action is at least well staged, if drawn-out and samey. You'll never feel lost or confused during the action scenes in The Avengers. This is what comic book fans have been begging for from their film adaptations for years; just scene after scene of übermenschen punching things into other things. It's fine for momentary entertainment, but after a while it just feels flimsy and devoid of any jeopardy, even when there are innocent people in the scene, which is rare. 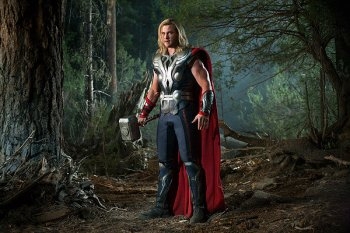 Yeah, you're just that guy from that other movie. Nobody cares.The central conceit of Assembling The Marvel TM Avengers TM is based on Nick Fury's vague idea of bringing back "old-fashioned American values." The thing is, this is treated as a glorious idea in the eyes of the rest of the cast, in spite of the fact that Nick Fury's superpower is telling big fat lies. He's a superliar. The alternative plan to develop a nuclear deterrent to combat potential Asgardian invaders is most certainly an "old-fashioned American value," given America's history with nuclear weapons. This secret weapon-development sub-plot culminates in an event that results in the film no longer holding our hand; in fact, it kind of turns the most relatable element of the film into something we can no longer rely on or trust.

During the New York scenes, the civilians are treated as faceless, nameless nobodies who must be saved (when they do appear at all), which means we are surely not expected to associate ourselves with them. In one scene, a group of survivors in a skyscraper is put into immediate danger - bringing to mind an unfortunate event that actually occurred in New York a few years back - and it falls upon Captain America to save them all; in the moment that he learns this he is framed as a reflection in the rear-view mirror of a ruined motorbike as he raises himself up from the ground. Is this film now putting the burden onto us? Are we, the audience, now collectively Captain America? Are you suggesting that we could have saved all those people if we'd only taken action? Are you blaming me for 9/11?

This comes across as an alarming call to arms to the audience to take back America in the name of "old-fashioned American values," something we have been encouraged to distrust earlier in the narrative. Maybe we should believe in the atomic bomb, we should believe in The Hulk and we should believe in superliar Nick Fury because after all, the bureaucrats lie to keep us safe, don't they? Might is right, anger wins, the atomic bomb will save us somehow; whether it's just to cover up the truth to aid the great, protective lie or to defeat our enemies, makes no difference.

Maybe this film is a deliberately regressive proponent of right-wing revival or maybe it is forcing us to come to some kind of understanding. Maybe they're telling us that we can't have the superhero fantasy without every political implication that comes along with it. We cannot worship the Thunder God Thor without accepting his ignorance and narcissism, we cannot pray for The Hulk to be a hero without accepting that we want Bruce Banner the scientist to diminish, we cannot hope for the Marvel TM Avengers TM to Assemble again because that would mean the world is in danger once more and the threat of nuclear intervention is also re-emerging.

It's quite possible that Whedon has made a genuinely subversive film here, unlike the pretend subversion of Cabin in the Woods, or it could be that the film's politics are sincere and that we are ultimately supposed to agree with Loki's philosophy that humanity is always destined to bow down to a greater power, so long as that power is not too overt about it. Given the tone of the piece, this political dilemma will probably be lost in the rush and never truly be satisfactorily discussed. As it stands, I found The Avengers to be a rather unsettling experience, a semi-accusatory and judgmental film dressed up as light entertainment.

MINORITY REPORT: If this movie is all about blaming us for not stopping 9/11, maybe the entirety of the Marvel movie plan was building to a film aimed solely at Mark Wahlberg. I believe it, and I bet Wahlberg does too. - Martin R. "Vargo" Schneider