Everything in the following paragraph is completely true: 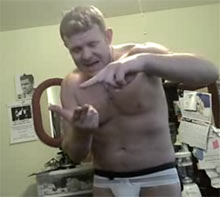 Dan pleasin' a ladyMeet former Notre Dame ballplayer and UFC fighter Dan Quinn, also known as the angel Maitreya, also known as the inventor of cold fission. That's his face, it's really big. He stopped playing ball amid an allegedly bogus attepted rape charge, so he instead decided to fight for a living. Nowadays he's over 40 years old and lives with his mother. God has spoken to him, however, informing him of his angel status and now he spends his afternoons mixing the sweetener stevia with water in a blender, which "explodes into a soup" (the miracle of cold fission) and purifies your body when you drink it, cleansing your body of cancer and excess weight. According to him, he is the toughest man on the planet thanks to stevia's health benefits, and compares himself to Muhammad Ali regularly. Dan threw his son down the stairs to prove stevia has magic power and compared it to the war in Iraq. The power of stevia brought his nearly-dead cat back to life. He has an imaginary friendship/partnership with Mark Brannon (Mel Gibson from Tequila Sunrise) and he thinks the character from the Bad Boy clothing line was modeled after him because he beat up 5 guys at a bar one time.

The following is for all women and children on planet Earth. This is your personal and very real Wonka golden ticket. Watch to the end, know that Josh risked his life going down the stairs into a rack-- equals paying this forward and following directions-- equals ending the war in Iraq. I have cold fission and the cure in stevia, equals the savior of planet Earth. Stevia blends water magically into a natural gas called "splitH2O" (operates blender) that equals ending global warming, equals cycling back into H2O beneath toxic soap, equals getting enough toxic soap out of H2O, equals my body ballpark to him (points to poster of Muhammad Ali) in speed and athletic ability, equals you not knowing about stevia because the evil rich don't want you to, equals an Uncle Fred (unintelligible) backs me up at Notre Dame when I'm set up and expelled for a false attempted rape that I could prove in court was a lie, or in Miami when the police brought (unintelligible) a nationally ranked white heavyweight boxer, I'm already rich and famous, and even though millions have already seen me on car windows, 'cause Google told me that the Bad Boy was me after I knocked out five guys who attacked me at Juanita's, and you might believe the following:
Twenty years ago at Notre Dame, and finally defeating an opponent in another country, and speaking with Muhammad Ali, I had a vision. One day, I'm the richest man in the world, using 98% of profit to share with all employees, ending written slavery on Earth forever. While my ex was pregnant, dreaming that my son would one day need a revolution, to now, twenty years later, that I was touched by God who told me I'm the angel, Maitreya-- M-A-I-T-R-A-Y-A, Google it-- and proceeds from stevia plus water plus energy slash blending, equals splitH2O and pureH2O, equals cold fission, equals a Nobel prize, equals eventual billions of dollars, equals I'm serious as a heart attack, equals eight teaspoons a day over four months melted away six tumors and sixty-two pounds from Uncle Bob's body, equals only one hundred dollars total at star west botannicals dot com, equals one pound a month to make pureH2O, equals my body ballparked to the greatest athlete who ever lived, Muhammad Ali.

Dan and His Mother Fighting in the Car

http://www.youtube.com/watch?v=oEGw39ZxQ-A#t=5m38s - A rant about a locker room incident 20 years ago, how stevia will end all drug use in the United States.

http://www.youtube.com/watch?v=PblXhbZNa3s - Dan gives a little tour of his stevia soup jugs to the ladies.

DAN QUINN. The SA members belonging to FYAD (Fighting, Youth, And Domination) challenge you to explain yourself. We are a community of athletic scientists who put an emphasis on fighting. It's natural and we're mostly males, it's what we do. Another thing we do is agree with each other that stevia is just plain sugar.

Myself, I'm a practicioner of the meat method. You take some frozen meat and ice up, right? Ice my chest, ice my legs, become impervious to attack no matter what. They do this shit in Afghanistan before battle but they don't talk about it because then the terrorists would do it, too. I ice up my legs for 15-20 minutes before a fight and I'm set for 2 hours or more of brutal kicks and leg movement, brother.

My feet > your legs because legs are longer than feet brother, equals you go down in 1 round from a kick to the head. It's going to be some Tales from the Hood shit because when these legs move it's like the Flash, it's like that fucked-up carnival or whatever, from the movie? And I'm like the Grandma and I turn around and my face is a skull (a vision of your defeat) and then my leg flies up with hawk speed right into your neck, because you made a mistake.

Stevia is common table sugar, OK? You call yourself a scientist, a Nobel prize winner, but it is the same, chemically, as a baby's vitamin or a placebo. My first thought when I saw you mixing that blender is that I could be ready at the slightest drop of the smallest hat to riddle your old useless body with blows that would break the jaw off a dog, a big fuckin' dog. The only boxing you're capable of is shadow boxing and you faked a shoulder injury to back out of fighting Dan Huckaba, you know man? Ross Clifton's bloated corpse could put up better punches than that slowmo handspeed shit you show everyone online. Check your Youtube private messages, we got you an SA forums account and we are just waiting for your gnarled little ass to show up, you know?

I don't know who the dude in the middle of this photo is he just kind of showed up but he's FIERCE in the ring. 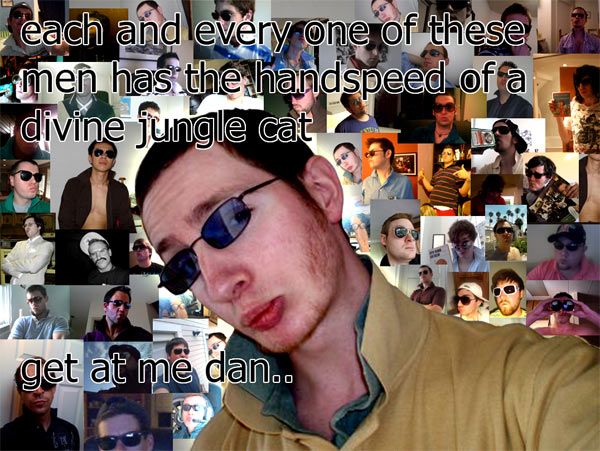