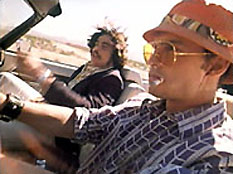 We can't stop here! This is Bemani country!Recently Rich has been talking about going on some sort of crazy cross-country nerd tour of America and dragging me along with him. He solicited suggestions for places to visit on the Forums and most people offered up things like "this totally awesome club where bands play" and "they have great hot wings and DDR at this place". I live in Chicago and Rich lives in Seattle and both of these major metropolitan areas probably contain better "clubs where bands play" and have a much more robust hot wing and DDR underground scene when compared to Boise or Kalamazoo. Neither of us has much interest in taking advantage of these opportunities where we live, so the odds of us painting random towns throughout America a hot wing sauce red is highly unlikely. Not to mention describing the quality of the "Dance Dance Revolution" machines at various locations won't make for a whole lot of entertainment.

The DDR Machine at the River Creek YMCA is pretty good. They have Annoyance Max Mix on it! Although one of the pads appears to be damaged from the fat kid jumping up and down on it. We heard that there's another DDR setup at BW3's in nearby Hook Falls, so we'll be heading out there for some Buffalo Wild Wings and more dance action.

My suggestion to Lowtax was to turn this into a trip through the seedy underbelly of shit-town America. We've spent years telling you what is Awful on the Internet and in the entertainment industry, but we've paid little attention to the brick-and-mortar horrors that lurk in small towns. Whether or not this is ultimately the focus of the epic Something Awful road trip that may or may not happen in one week to nine years from now, I would like to bring to the attention of our readers some of the worst reasons to visit small towns in the United States.

My own small town of Sidney, Ohio is a bustling metropolis of just over 20,000 people. It features zero shopping malls, one Super Wal-Mart, a movie theater that has the same seats and sound system as it had when it opened during the Eisenhower administration, and approximately five hundred drive through convenience stores. In small town Ohio convenience stores have been almost entirely replaced with these places that look like a drive-through carwash but instead of hosing your rusted Camaro down they hand you a cold twelve pack of Natural Light. Somehow Sidney and its small population manage to support at least fifteen of these establishments. The market is so saturated with them that I'm frankly surprised they haven't started building them in the middle of the street to attract more customers.

Sidney is not without its share of amazing tourist attractions. According to the Shelby County Bureau of Commerce some of the reasons to locate your business in Sidney are: 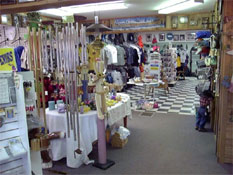 Every tourist attraction features a shop like this for all of your vanity mini-license plate, assorted low-quality craft, and bad "regional" candy needs.

The Big Four Bridge: You know how they build bridges for railroads that hardly ever get used anymore? Yeah, this is one of them, and it's fairly big.

The Spot: This is a 50's style diner where you park next to a tinny speaker and then bored high school girls bring your food out to you. The interior is teeming with the elderly, the poor, and the crazy. The food is similar to Wendy's if you submerge it in a mixture of boiling grease and botulism. One of my good friends ate there and hours later suffered from stomach cramps and a bleeding ass.

The Titanic Museum: You wouldn't think that a tiny town in the middle of a land-locked state would have the world's largest Titanic museum. You would be right because it doesn't, it has a metal prefab building with a noisy air conditioner that smells like a machine shop and has a model of the Titanic and a few pictures of people who fell off the ship and died. These days it might have a piece of the anchor or something else the proprietors bought on ebay, but probably not.

A Real Drive-In Movie Theater: For most people living in the 21st century a drive-in movie theater is truly an anachronism, but since Sidney is an incorporated anachronism in Shelby County it fits right in. The best part about Sidney's drive-in theater is that about five years ago a really big storm hit and blew half of the screen down. Instead of putting it back up they just hauled it away and refocused the projector onto the remaining square.

The Big Rock: There is a park in Sidney that is, in essence, about thirty acres of completely untended woods with a few roads and playgrounds stuck in it. The star attraction of this park is a particularly large brown rock, which has a wooden sign next to it identifying it as "The Big Rock". Invariably this sign is "fixed" each year by teenage wiseacres who rename it "The Big Cock". As a side note on the general low quality of teenager's graffiti in Sidney I once saw a stop sign where the only change made had been to add an exclamation mark after the word "stop" in black spray paint.

I've been on my share of road trips in the past and know from experience that Sidney's pathetic tourist attractions aren't even scraping the bottom of the barrel. There are some truly pitiful excuses out there for getting people to visit a given town. In an effort to plan visits to the absolute worst of these I did thorough research and I present to you now a few of the most pathetic. The thing is these aren't even the worst; these are the ones I ruled out as "not bad enough" to suggest to Lowtax. 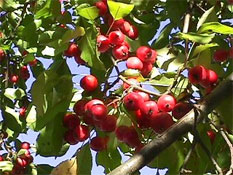 Nature's medicine cabinet tastes like shit and makes you sick.Description: In their Board of Tourism brochure, Lombard claims to be "the crabapple capitol of the world", a boast that is simultaneously surprising and depressing. Crabapple trees apparently have an affinity for the verdant lands of Lombard, and for whatever reason have been cultivated by the confused townspeople there. The largest grower of crabapples in Lombard can be found at "Crabapple Ranch", a 100+ acre orchard where people are intentionally growing crabapples. According to Lombard's ineffectual Board of Tourism crabapples actually have important uses other than making unattended toddlers vomit. "The crabapple was once considered nature's medicine chest. Native American tribes used a boiled paste derived from crabapples to help heal wounds and in the 19th century crabapples were a key ingredient in a particular brand of indigestion tablet!" Well I'll be damned! Crabapples ARE nature's medicine cabinet! Much like the lumps of dog shit that litter the grass outside my apartment are nature's moccasins. If you've ever wanted to see thousands of nuisance-fruit bearing trees growing in unison then head on over to Lombard where the lawns all reek of inedible rotten fruit!

Description: A lot of restaurants, hotels, and bars make a name for themselves when a famous guest stops by and signs a photo. For the Outlook Café in New York, Arizona, simply the fact that Albert Einstein supposedly drove through the town is sufficient to name a business after him. The Café also features "the largest portrait of Albert Einstein ever made entirely from uncooked pasta". Maybe they can comb his memoirs for proof that when he drove past the Outlook Café he actually turned his head and looked over at it! 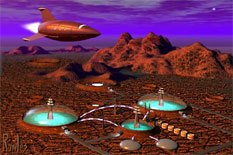 Oh fuck, the Herculons draw near!Description: Bowling Green is a small rural town less than fifty miles from our nation's capitol. To compete with the immense influx of tourists to Washington D.C. the geniuses of late 70's Bowling Green erected a museum dedicated to the future of space flight. Why they chose this topic is a mystery only deepened by the enigma of why they didn't consult anyone with even a rudimentary knowledge of the space program when putting their museum together. Details are hazy on what the museum actually contains but I did turn up some of the exhibit titles after a phone call to a nice lady at the Bowling Green library. Apparently they had a flier up near the entrance and she brought it over and read me the whole thing over the phone.

The Atom: Man's Solution to the Powers of Neptune

Below the Seas of Mercury

Asteroids Are Our Friends

While I liked the idea of catching a ride on "Mars Lifter 1985", the idea that we may at any moment be attacked by the Herculons was very disconcerting.

Description: Many cities and towns throughout the country have memorials dedicated to the Civil War or all wars that men of the town served in. Even little old Sidney has a memorial for Vietnam with a list of about ten or fifteen names of men who gave their lives in that bloody conflict. Grigsby, Maryland is unique in that it has constructed a fairly large Civil War Memorial and this memorial carries only a single name; Private Clark Edison. Edison was a rifleman who was wounded by a Union horse during training, had his leg amputated, and then defected to the Confederate lines when he reached battle. He was killed while attempting to flee from a Union picket at Antietam Creek. I'm not really shocked that all this happened in the unfortunate life of Mr. Edison, but I am extremely surprised that the town of Grigsby would erect a monument to honor him. It should come as no revelation that Grigsby is an extremely small town.

If your Podunk town happens to have an equally impressive or depressing monument to the sheer worthlessness of itself then please feel free to e-mail me and let me know! Lowtax and/or myself might just pay your town's star attraction a visit.

Marry Christmas everybody! It's your humble mutant and Phriday host Josh "Pants Shifter" Boruff here to let you know all is well. There is a fantastic new Photoshop Phriday up, and it's probably one of the best we've ever done. This week is all about Dick and Jane, those two preteen titans who champion literacy and innocence in schools everywhere. Here is a scary sneak peak: 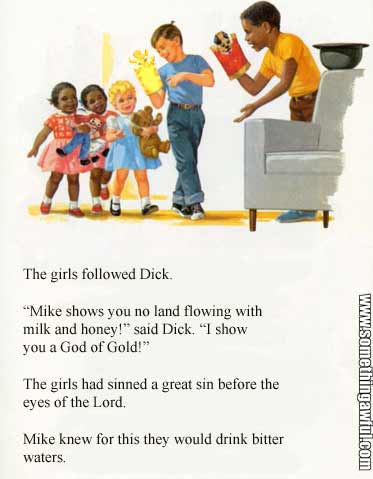