I hope you're all excited for Skyfall... well, don't get too excited because you might be disappointed; Ian "Professor Clumsy" Maddison explains why. Then Joseph "Jay Dub" Wade weighs in on Cloud Atlas and Sean "Keanu Grieves" Hanson rants about Silent Hill: Revelations.

EXPECTATIONS: I have to admit, I'm not really a big James Bond fan, in spite of my Britishness. There are a few gems in there, but on the whole Bond films are so extremely formulaic that they're essentially interchangeable. Then along came Casino Royale, which rewrote the rule book and revamped the franchise as brutally violent and deadly serious. Personally, I wasn't impressed with the resulting disparity in tone, but I did feel like they were on the right track, generally speaking. Quantum of Solace went right back to formula, throwing out the baby with the bathwater, and now we're all hoping that Skyfall will strike some happy medium between the two.

REALITY: Skyfall, for all of its massive spectacle, is mostly filler. It's a film with a lot of boxes to tick at the expense of telling a coherent narrative. If you take any of the franchise films of the past few years and mash them together, you have most of Skyfall in the bag. Take the pacing and character dynamics from The Dark Knight, throw in the plot from Live Free and Die Hard, borrow some chase scenes from Mission Impossible: Ghost Protocol and sprinkle in a little Inception and voila! The first two acts of Skyfall! For the third act, we'll just toss in a nod to Straw Dogs for good measure.

When MI6 operatives James Bond (Daniel Craig) and Eve Moneypenny (Naomie Harris) fail to stop a mysterious man from stealing a hard drive full of agent identities, Bond is left for dead and the shady Mr. Silva (Javier Bardem) starts revealing the agents' identities on YouTube and launching terrorist attacks in an attempt to get revenge on M (Judi Dench), the head of MI6. So, Bond comes back from the fake dead to find the weirdo and terminate him.

The problem with this seemingly simple plot is that it takes two hours just to establish itself. The whole first act is completely superfluous. Why do we need this subplot of Bond faking death and then coming back? Because it fills twenty minutes of screen time, that's why. Why do we need to watch him infiltrate a casino and romance a lady over a vodka martini? Because, as I mentioned earlier, this is a film with boxes to tick. The screenwriters have clearly been briefed on what elements of the Bond formula need to be included, so we get nearly half of the entire film devoted to this unnecessary material before SIlva is even introduced. 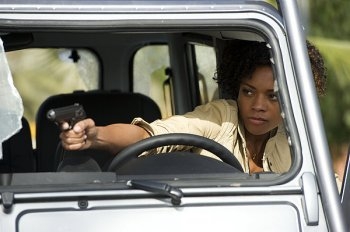 Gunpoint!It's at this point that Skyfall actually starts to become a bit of a fun ride. Bardem is the kind of scenery-chewing, Looney Tunes villain that this film needs. He strides around his private island making impressive speeches about the last two cannibalistic rats finding each other. Unfortunately, this cannot last as he becomes another Batman villain with a ludicrously elaborate plan that - surprise surprise - involves him being caught for apparently no reason other than to save him traveling to London on his own expenses. Once there, he becomes intent on either killing or living out an incestuous mother fantasy with M, or probably both. Why does he need a plot that would make the A-Team crap their pants in order to do this? Filler.

In the third act, the entire film changes. It becomes a "save the farm" kind of story and it also gets rather good. Bond must now scrabble together whatever he can to fight off the incoming forces of Silva's goons. It's all a bit unexpected and it's fun when it happens, but if this is really what the whole film has been building toward, why even waste our time with the first two meandering acts? This film spends two hours deciding that it shouldn't be embarrassed about embracing the fact that it's a James Bond movie and then decides it's going to use that new-found boldness to be something else entirely. Something better, granted, but still not something that it seems sure about. 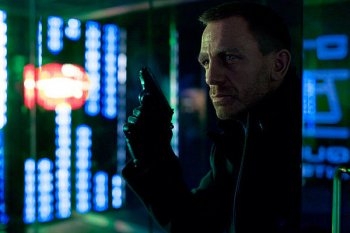 Gunpose!The whole film is like that, though: It's manically uncertain at all times. It wouldn't be too much to ask for a little consistency in a film of this scale. You'll be constantly asking yourself why these characters are behaving the way they are or why something that just happened doesn't mean anything now. It is basically a series of tenuously connected, Bond-themed vignettes. Some of those vignettes are very good in their own right, largely due to the strength of the cast and cinematography, but you're not going to walk out of this one caring about the film as a whole. Probably because the film isn't a whole.

When your film and its plot spend so much time battling between the idea of modernisation and doing things the old-fashioned way, it's frustrating that it ends up being so indecisive on the matter. Yes, you hit all the right Bond formula notes and you still managed to maintain some elements of modernity, but wasn't the whole point of Casino Royale to drag Bond into the 21st century kicking and screaming? It's like seeing a sponsor successfully looking after a recovering alcoholic, and after a long month of hard work getting him sober, she buys him a bottle of whisky to celebrate.

MINORITY REPORT: Here's an idea: Get Martin Campbell to direct EVERY entry in the James Bond franchise. He seems to be the only director incapable of delivering a disappointing Bond flick. - Sean "Keanu Grieves" Hanson