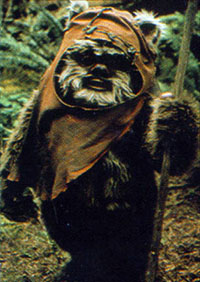 The traditional "Movie Ewok," with fluffy hair, clothing, and tools.While ewoks are often mawkishly portrayed on film as cute, curious little urchins that live in tree houses and coo adorably, the reality of wild ewoks is an entirely different story. I live near the redwood forests of Northern California, so I’ve been around ewoks all my life; every hike, picnic, or camping trip I’ve ever been on has been marred by their unwelcome presence.

Are ewoks cute? Not at all. That’s pure Hollywood magic. In fact, ewoks are some of the most disgusting wild animals in North America. The dandy little chaps you’ve seen on the silver screen are just midgets in ewok suits; real ewoks don’t have smooth, clean fur, and no sane human would be inclined to pet one. They’re so plagued by lice, fleas, dander and mange that their coats are spotted with huge bald patches and pocked with weeping sores. Touching one would likely net you a fistful of loose fur, matted with pus and crawling with ticks. 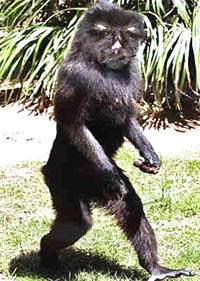 A skulking, drooling menace.I have no idea how ewoks manage to stay alive, because they are the filthiest and sickliest animals I’ve ever seen. They don’t fastidiously groom themselves like cats or raccoons, and they have a natural aversion to water; consequently, they languish in feculence and disease. Their eyes and noses are constantly weepy from illness, and they have little concern for hygiene, so their faces become slick with mucous and brownish eye discharge. They wheeze and gurgle as they breathe, their lips and noses bubble, and their watery, bloodshot eyes stare unfocused into the distance, betraying no glimmer of intelligence. Their unique combination of poor health and listlessness is often so overpowering that they leave their membranous inner eyelids halfway closed, like anesthetized cats.

I’m particularly amused that Hollywood ewoks are always clad in little leather outfits. I don’t blame producers for demanding that ewoks be clad, because the sight of an ewok in its natural state of nudity would certainly overpower a child. Ewoks have one of the highest genital-size-to-body-size ratios in the wild kingdom, and they have no shame about public autoeroticism.

While the sight of a male ewok languidly fiddling with his massive purple sex characteristics is ghastly enough, ewok mating season is worse still. It’s a sickening spectacle; the females develop sagging, gristly teats and gigantic engorged vulvas, and when they’re in heat they will “present” them to any living thing around them (they are particularly fond of trying to initiate sexual acts with human children, who are of a similar size and build). Watching those old made-for-television “Ewok Adventure” movies is a nerve-wracking ordeal for those familiar with wild ewoks, because we are instinctively vigilant about keeping children away from ewoks at all times, lest they be courted or even raped by the lust-crazed vermin. 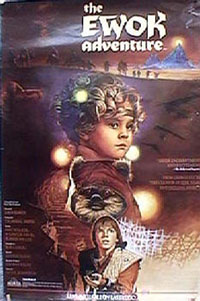 A REAL Ewok Adventure is prying a lust-crazed ewok in heat off of your daughter.Of course, children and adults alike tend to steer clear of ewoks. Not only do ewoks have powerful scent glands which emit a nauseating, eye-stinging, sulfuric aroma, but their odor is further invigorated by their feces-encrusted hindquarters.

Keeping them away can be a difficult task, though. Ewoks have no fear of man, and those who live near parks almost always rely on tourists to feed them. If they ever had any skill at hunting, it’s been lost for generations. Most of them simply hang out around campsites screaming for food (they don’t chirp and chortle; hey have a high-pitched, keening screech like fingernails on a chalkboard). If you don’t feed them, they screech louder, tug at your clothing, and sometimes even throw stones. They break into cars and tents and rip apart people’s belongings, stealing anything edible or shiny they can find.

Ewoks in popular national parks inevitably become grossly obese, since timid tourists are easily menaced into giving up food. Obese ewoks are an almost comical sight. They waddle from camp to camp breathing heavily and rubbing their distended bellies, moaning like pathetic wretches for another bite of food. The levity is undercut by the fact that they tend to develop intestinal problems, which lead to loose bowels. Predictably, they are unashamed; they just stand around gawking at nothing, gorging themselves on ill-gotten food and shitting down their own legs without embarrassment. 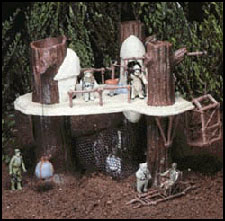 If you showed this to a real ewok, it would smash it to bits seeing if there was food inside.They don’t have chiefs and tree houses and little societies, either. They’re vicious, primitive and territorial, and campers in the redwoods are often treated to screaming disputes between competing males. Unlucky campers who book sites during ewok rutting season might even see ewoks savagely ripping each other apart with their teeth and claws, or be kept awake at night by the shrill, gurgling cries of a half-disemboweled juvenile who tried to challenge an older buck. However, even the horrific din of ewok violence is preferable to the fevered, slurping yowls of seasonal ewok mating pairs, which sound like the cries of napalmed children being dragged over a salt flat.

Filmmakers do us a great disservice by portraying these animals as anything but dumb, repulsive hooligans of the forest. Moviegoers who had never been within a hundred miles of an ewok were so swayed by the pleasant portrayal of ewoks in Return of the Jedi that they successfully lobbied to have the awful creatures put on the endangered species list, meaning hefty fines or jail time for any man who shoots the ewok that destroyed his tent or raped his child. Since their inclusion on the list of protected species, ewoks have become so populous in the redwood forests that they’ve begun to encroach on human-inhabited lands. Thanks to George Lucas, Northern Californians are now faced with upturned trashcans, broken windows, sleepless nights, and the hundred-pound carcasses of ewok-roadkill.