The Scariest Games of Halloween 2005! 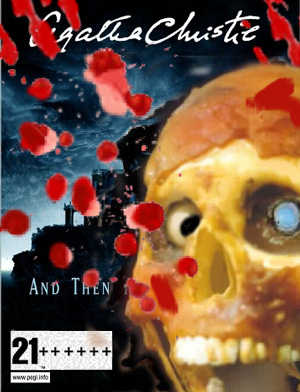 Is this the kind of game we want our children to be trick or treated to?Tim Burton's Nightmare before Christmas: Oogie's Revenge

Now is the season we've all been dreading, parents! It's time for another fightastic halloween, with all the little boys and girl dressed up as ghosts and spooks and heros like Lex Luthor. But when we're busy not paying attention to our little Jimmys and Luthors we give them a video game or two to play with. As a proud Christian parent of nine, I feel it is my duty to tell you all about the most fearsome games coming out this season so you know which to avoid. Our first title comes directly from the hands of the director Tim Burton, famous for "Interview with the Vampire" and "Rocky Horror Picture Show." My one son John seems to think he's a very nice man, but after the implied racism in this game I don't even know. The use of skeletons as heroes is very disturbing to me, as well. I don't know what I'd do if I caught my son Jim running around pretending to be a skeleton in this day and age. I keep asking him to be someone respectable like Lex Luthor, a good honest Christian. Of course, I know Lex Luthor isn't real. It's a character based off the real Lex Luthor.

Agatha Christie: And then there were none 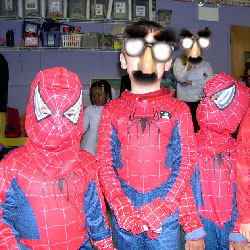 Children being shamelessly dressed up as "Superman". Faces are hidden to protect the possibly innocent.

It's unfortunate that many children today cannot experience the kind of fright that I used to have when I was a child. Most of them have no clue as to how Halloween even came about. Halloween's origins are obvious from just the spelling. "Hallow" means "holy" (as in the Lord) and "een" is the last three letters in the word "seen", so it means "holy sights of cute little ghosts and witches". What's even more shocking, according to my son Jared, is that none of the children at school are taught about the origins of Halloween or Devil's night. Devil's night came about when the missionaries from Jamestown decided to "beat back the devil" in the night before their children would travel amongst the town to trick or treat, to protect them. Back then it was safe to practice your religion, so they put the town leper into a potato sack and beat him until he stopped moving. This scared away the devil pretty well, if I can recall. Now children rarely beat any lepers to death, nor do they realize what kind of trickery their parents play on them. All of these Catholics who keep dressing their children up as "Freddy Krueger" and "Austin Powers: The Spy Who Sold Me to the Devil". Don't these catholics know that the way they live their life is going to lead them directly to a very bad place? As a very Christian father of nine, I do my best to tell Catholics that they need to become Christian to be kept out of the hands of the Devil and Superman. I give them issues of Lex Luthor the comic as a reference, making it very clear that even though it is a fictional character based off of a very real person, he is someone you can trust and should try to emulate. They always look at me strangly, which I can only assume has something to do with their penchant for using computers. 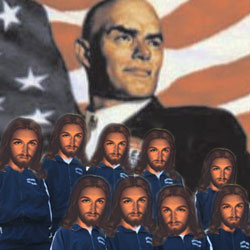 All of my sons, Lux Luthor looking over them all.I cannot imagine why anyone would allow their son or daughter to play this filthy game. Do these parents know what kind of terrible influence they are giving to their children? I've seen lots of children dressed up as this revolting monster of modern "political correctness" walking around, his plastic devil face being put over children's innocent faces. I'd never let my son Jack do anything like this at all, I can tell you that. Scooby-Doo is the modern man's symbol of gluttony and to encourage children to commit larceny by having them burn down a church? THQ must be full of brainwashed monkeys if they think they can get any of my nine sons to commit such acts like Godless zombies. Do any of these parents know what a "scooby" is? I had my son Jordon look it up on the internet becuase I refrain from touching computers at any cost. Then I burned the computer afterwards becuase we all know that those who uses machines have the symbol of the devil held within their panty eyes. If you wish to keep your body pure and free of unnecessary minerals, I would suggest you follow the same path. This includes steering clear of unclean punctuation. Capital letters were invented by the Lord-less romans and I refuse to use them. I hit my son Job thrice for using those things. If you don't want your arteries to clog with zincs and other devil metals, I suggest you do the same. 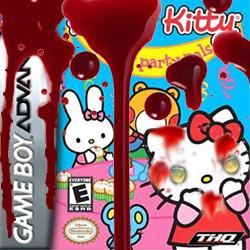 Not only is this game violent and full of death, but it also advocates capitalization.And hitting the shift key on a computer just intensifies the Lord's rage upon you. The sin of trying to mimic the ways of the romans, on top of using a "PC" (Pernicious Contraption), is like asking for a one-way ticket to a place I've told my nine boys constantly about. I do my Christian duty and remove both the shift and caps lock keys from my neighbor's computers. I also remove their 6's, 2's, 3's, and 1's, for they are all needed to make the devil's number. The only acceptable numbers are the ones I have my sons memorize every day: 0, 4, 5, and 7. It is also every Christian's duty to keep our children safe during Halloween by taking all of their candy and dipping it in holy water before you give it to your children. My sons say it not only keeps them safe from the demonic minions but also improves the taste of the candy a great deal. Sometimes people do not like to listen to my advice, like how you relieve all your valuables, pawn them, and then donate the proceeds to the church of your choice. Some people don't like to listen, and I assume it is only becuase they lack the time. So, as a good Christian father of nine, I take the time to do it for my neighbors. Both Jason and Jeff, my two wonderful sons, act like wonderful Christians and help me with my duties. Unfortunately, the United States of UnGodia does not believe in offering Christian service and have locked them both away. Lex Luthor would never do such a thing. The character based off of this fine man is a president, why isn't the real Lex Luthor our President? Like my son Justin always reminds us at the dinner table, I cannot understand how a country built on such wonderful ideas can sink so low. We have requested an appeal.