Pray pause from your duty or dally, passerby, and vouchsafe a careful eyeballing toward this, the thing that you are already reading. And still, if you have not yet paused to read this notice, and thus have not witnessed the bit where you were already encouraged to stop and read, please now do so, and heed it please. We trust, after these logically foolproof commands, that you are now reading this notice. If not, please begin now.

Now that we, your betters, command your full brief indulgence, we admit with some trepid sheepdom that this bulletin is largely a work of informative custodianism, fraught with tidings mere and minor, and you should not be too interested in hearing that, perhaps, Dorroile has been Commended officially. But even so slight as it is, a bulletin is a bulletin and your eyes aspire to no purpose more urgently than the reading of it-- which we hope that you are doing now; if not, please do. Our news is small but happy.

When last our dispatch troubled this pole, we announced the public election of a new god for our District, trembled as we were under the wrongheaded supposement that Dorroile, the worst man, may had been plotting some manner of godship or godownership. While our facts were false and our haste to elect a god was, retrospectly, quite babyheaded, we harbor no regrets. And why? And why, you fairly ask, would not regret consume us for our admitted idiocy? You would be fair to ask it, though we hope you will not ask, because you would be punished so terribly for that.

Because, we answer you, we are filled with constant delight in our error! For we have elected Swimp as our god, the holy invention of our Superior for Discipline, Weyre Asb. Asb, in the campaigning of his deity, spake thus:

My god is called Swimp and he is a cookie bear, which is just what it sounds like. He lives in the moon and he is bunny soft. Dorroile will be confronted by the good of Swimp and he will decide to be a more positive influence on children. Dorroile's god will probably be very moved by him too, and will become Microswimp, who follows Swimp and collects his leavings, which are cherries for hungry babies.

And he won-- Swimp won! Swimp, the cookie bear from the moon, is now our permanent god forever and we all worship him and we love it! The full commandments and lessons of Swimp are still being drafted by your superiors; please expect to read and memorize them soon.

Even Dorroile, though he is still the most direly worst of all extant people, has pledged his jolly loyalty to Swimp; he has not yet become Microswimp, as was prophesied in the ancient document of the pre-Swimpian era, but our faith is unflapping: this shall come to pass. And in fact...

Dorroile is Still Terrible, But Better?

Already-- though Microswimp he is not, as he still perpetrates more heinous deeds in a single day than the most troublebrained of cocklaws could aspire to inflict upon a lifetime-- Dorroile has inched in the most mosquite of ways toward non-evil actions. Or could it be just our Swimp-deluded optimism? But listen, because maybe:

For the first instance in the recorded history of ever, Dorroile has been blessed with a Minor District Commendation by his worst enemy and most harrowed victim, your Claude Fantsy, Head Better Superior. His commendation was won by an uninterrupted minute of honest virtue, in which Dorroile was seen by many to perform a feat of good: the prevention of torment unto a manlet.

On the day seven days ago, near the Weep of Desperation where Dorroile often goes to dance grotesquely and leer at his own terrible creation, the perverted statue he built in replacement of the formerly beloved panther statue, Dorroile was seen to interject himself in the affairs of a bully, who had chosen as his target a defenseless manlet.

The manlet was Poopwilliam, a tiny man with his eyes too wide and one twisted arm due to bad birth and problems in his brain. He was so named, if you are curious, because our medical scientists speculate that his condition is on account of having exercised his bowels while still inside the womb, causing the womb to be flooded with his none-be-mentioned.

Let you be reminded that the Code of our District mandates the sternest punishment for interfering with the placitude of a manlet. The manlet is a protected species in our District, and he must be kept free to wander and groan of his own accord. He must be fed and taken care of by everyone, because he is too stupid. We must clean him of his drippings when he eats, because he knows no better. The thing of highest importance, however, is that a manlet is never to be heckled.

To heckle a manlet is the greatest shame, and we all feel just terrible when it happens. 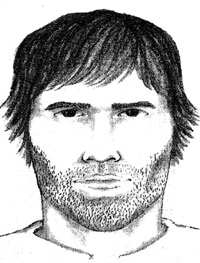 BloachOn this day seven days ago, like we said, a bully of some notoriety-- popularly called Bloach, this bully-- was seen to follow Poopwilliam for some distance through the Weep, hurling clod after clod of gulch mud at the head of the wailing blameless manlet, whose babyheaded brain was absent the wattage to apprehend the nature of cruelty. Though many looked on, all were cowardated by the repute of Bloach, who had slapped them many times and made us all cry once. Only Dorroile, a man worse than Bloach though he would never heckle a manlet we think, could muster the decency to intervene.

With a swiftness suggesting pure instinct, Dorroile seized the shortpants of the bully Bloach and exerted sufficient pressure downward to denude the lower half of him. Dorroile then pushed the bully to the ground and commandeered the shorts, announcing that due to his shameful heckling of a mooncalf, he would harry Bloach for the rest of all time and never let him wear pants again forever, for even a moment.

In the commotion, Poopwilliam scuttled away and was hugged by a sympathetic crowd, who no doubt carried in their hearts the seventh lesson of Swimp, which is to always hug a sad sweet baby. Poopwilliam, to our delight, has not lost his babylike trust in all men. He is now safely ensconced in a celebratory treat room, where he is being tickled and fatted with candy treats.

It is for this act of uncharacteristic virtue that Dorroile was awarded a Commendation, though we harbor an electric dreading nerve that he will only use it to further his boasts, or that he will humiliate his Certificate of Minor District Commendation by exercising it as a prop in one of those awful dances he do.

But true to his word, Dorroile has not allowed a single day to pass when Bloach was allowed to wear pants, or indeed even underthings. Though Bloach has many time tried to entertain pants upon his person, they are always briskly removed before he can foot two steps-- sometimes by Dorroile, who has hidden in a close bush, and sometimes by the tramps that Dorroile employs as his agents.

Sometimes, though, the pants seem to fall from Bloach of their own free will, as if Swimp himself were complicit in his humiliation.