Ah, the joys of Summer. BBQs, the beach, hot women in bikinis, we hardcore gamers yearn for none of these things. Our Summers are spent taping blankets on our windows and sitting in the dark watching trailers and reading previews about the latest and greatest video games set to come out in the Fall taking breaks only to watch Futurama and curse Fox for cancelling such a wonderful show in its prime (Which begs the question, how can a network with such a conservative news channel air such liberal cartoons?). No screenshot is too far. No video is too large. No tidbit of information is too small for our relentless scrutiny and speculation. The waiting is almost unbearable.

But wait no longer friends! Something Awful, the leading video game news site in the world, has shelled out the cash for hands-on world exclusive previews of your favorite upcoming Xbox 360 games. We proudly present our Xbox 360 Summer preview spectacular!

Too Human is the long-awaited sequel in the critically acclaimed God of War series. In this installment Kratos is sent to a grim future by the god of the underworld Hades (voiced by James Woods) where he is fitted with a cybernetic super suit that increases his strength to unimaginable limits.

In this bleak futuristic world Kratos must save civilization from machines that threaten to exterminate mankind. To do this Kratos can unleash furious combos at his enemies that he can chain together to deliver devastating carnage. The frame rate in the preview build was choppy and the load times were excruciatingly long but the developers plan to fix all of those things before release as Xbox 360 games don't have any frame rate issues whatsoever like the horrible mind-numbing screen tearing seen in all those terrible Ubisoft games. This is next-gen baby!

Originally planned for the PlayStation 3 Sony decided to port Too Human: God of War 2 to the Xbox 360 because they knew their own console would not be released in time. Too Human is set to infringe its way onto Xbox 360 this Fall!

The tits now bounce independently of each other. Game of the year.

Oh it's about volleyball you say? Really? Couldn't really tell from the trailer.

Dead or Alive Xtreme 2 shamefully spikes its way onto Xbox 360 this Fall!

Viva Pinata
Genre: Pinata simulator
Developer: Rare as in it's rare to find a good game released by them since 1998

Looking for the perfect gift for a friend that just recently came out of the closet? Well then, look no further than Viva Pinata! No, it's not a faithful recreation of the sport known as beating the hell out of cardboard with candy inside. It's a freeform sandbox game where you tend to a garden to attract creatures that bear a resemblance to pinatas. Take control of this interactive environment unlike the real life environment you've lost your grasp on years ago.

Feeling the last shred of heterosexuality draining out of yourself? That's just part of Viva Pinata's charm. There are over 60 different pinata animals to attract to your garden but don't be surprised when all you get are dumb ducks. Anything can happen in this virtual garden! By anything we mean your pinatas will probably just walk around in a circle and occasionally make a sound while you sit there and wonder why the hell you forked over 50 bucks for this shit.

Viva Pinata is set to animal cross its way onto Xbox 360 this Fall! 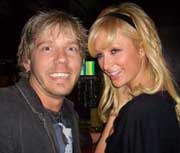 Cliffy B! Cliffy B! Over here! You are soooo cute on G4TV! Cliffy, tell me your theories on video games! "Destroyed beauty" is so deep, man. I read your blog every day and I'm totally with you that video games are artistic! What a small world, I loved Resident Evil 4 too! I totally get the idea of the "forced look" technique. Whenever you're around my eyes are drawn to you. Oh, and Lunar was so emotional that I cried when Luna revealed that she was the goddess. So touching...

Cliffy B! I don't think you are gay just because you look like you just got off of an appearance on Queer Eye for the Straight Guy! Cliffy B can you include high-definition pictures of yourself standing next to C-grade celebrities as a special unlockable in Gears of War?! Cliffy B! Don't be ashamed of your Jewish name, friend! Say it loud and say it proud! Bleszinski! Don't acronymize your last name like so many other self-hating Jews! I would totally convert for you Cliffy.

Oh God I can't wait for Gears of War Cliffy! "Emergence Day" is coming! The day you emerge out of the closet I hope! Cliffy I love you please respond to my phone calls!!! Cliffy!!! Cliffy?!!!

The original Forza Motorsport upped the ante for racing games with the sheer amount of cars available to drive. From go-karts to trucks to a really excited Scottish guy Forza had it all. Forza 2 raises the bar even higher by including a wider collection of vehicles to drive. Players can race the usual sports cars, but also soap box derby racers, combine harvesters, and yes, even airplanes.

I mean, aren't we sick of racing games with the same old Enzo Ferrari racing around on a track in Tokyo for the millionth time while some kid who has been playing since exiting the womb and is better than you ever will be calls you a faggot nigger on Xbox Live? I want to play racing games with golf karts, submarines, and wagons pulled by St. Bernard’s. I want to finally answer the age old question, what would win in a race, a fork lift or an '85 Honda Civic. And you should be able to hit other drivers with chains like in Road Rash.

While the real Forza probably won't be as fun as what I just described at least it won't have the same dumb cars every other racing game has. Forza 2 races its way in a bathtub with wheels onto Xbox 360 this Fall! 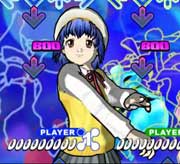 It was only a matter of time before they ported this shit to the Xbox 360. Dance your ass off as you watch what looks like an underage girl dance around onscreen in a short skirt. Do well enough and you get to see her panties! Hooray!

For those of you too scared to go outside and find an arcade DDR machine you can buy the home game and embarrass yourself in front of your cat instead. Dance Dance Revolution Universe unfortunately dances its way onto Xbox 360 this Fall!

If there's anything I want in life it's more Dynasty Warriors games. And if I can't get that I want more games that are complete rip offs of Dynasty Warriors. I don't know why everyone is poppin' so many boners over this game. The gameplay footage looks utterly confusing to me. So you just do some kind of fireball move and kill 60 dudes in one sweep and you do this 10 times and you beat the level?

How many enemies are too many? After the 1,000th kill don't you get kind of bored killing the same guys over and over again? I just don't get what the appeal is! Well, I guess that's because I don't sleep with body pillows that have pictures of anime girls on them. Can someone explain these games to me?

Anyway, Ninety-Nine Nights boobs its way onto Xbox 360 this Fall!

While the Xbox 360 has been universally well-received by gamers the one complaint that keeps on creeping up is that the graphics are too good. At times players will forget that they are playing a video game and forget to move their character and die and file a lawsuit against the developer because the graphics are just so realistic.

Enter Bullet Witch. I was playing a preview build in the Something Awful review closet when Lowtax walked in and said, "Just what is this?! Why are you playing Xbox games when you should be previewing Xbox 360 games?" I replied, "But Lowtax, this is an Xbox 360 game!" He was shocked but ecstatic.

"Wow, that is keen! I am sick of all these realistic looking video games but I finally have a reason to buy an Xbox 360!" With that he rushed out and purchased his very own console. I predict many others will do the same when Bullet Witch bullet witches its way onto Xbox 360 this Fall!

If there's anything gamers like more it's buying the same games over and over again on different platforms. Microsoft saw the kind of wealth companies like Nintendo were amassing and thought, "Me too!"

After pumping quarter after quarter into Street Fighter in the arcade, spending my hard earned allowance buying Street Fighter II Turbo on Super Nintendo, shelling out for the anniversary collection on Xbox, and buying Capcom Classics Collection on PS2, I think I am ready to buy Street Fighter yet again on Xbox Live Arcade. In fact, Xbox Live Arcade promises the chance to buy tons of games that you've purchased countless times before! Pac-Man, Galaga, Mortal Kombat, all your favorite games are here to buy over and over again!

But for the first time ever you can unlock achievements and add points to an arbitrary number that has no value to anyone anywhere! New Xbox Live Arcade games wakka wakka wakka their way onto Xbox 360 this Fall!

Halo 3
Genre: Shoot guns while ethnic slurs are being screamed at you
Developer: Bungie

Real first-person-shooters are played with a mouse and keyboard. Come talk to me when you little kiddie console gamers are ready to graduate to real games. In the meantime I'll be fragging newbies in Quake III Rocket Arena.

Halo 3 sells a zillion copies to frat boys on Xbox 360 this Fall!

Another year, another Madden. This year's ballgame promises to be the only next-gen football game thanks to strong-arm mafia-like tactics. We sat down with EA spokesperson John Muller to get the inside scoop on this year's gridiron classic.

Last year's Madden was just a warm-up! This year we are really stepping up our game to crush the competition, of which there is none so mission accomplished! We're cutting more features than ever before. Season mode? See ya! Passing plays? Gone! Texture maps? Buh-bye! We're really taking Madden back to what the core football experience is all about, watching big men too stupid to wear a helmet when they ride a motorcycle touch each other. Also, each player will have a special attribute for "closet homosexuality".

Thanks John! We'll be looking forward with anticipation to see which of our favorite game modes get cut. Madden 2007 exclusively licenses its way onto Xbox 360 this Fall!

Prey is a revolutionary first-person-shooter with a grand story about spaceships and aliens and unique gameplay elements but fuck all that shit. I only care about one thing.

They laughed at me for never losing faith but who has the last laugh now?! Muahahahaha!

The Xbox 360 has come a long way since hopeless nerds stood in line to pay $400 for it in 23 degree weather only to go home and watch it overheat and break. The future looks more promising than ever. Microsoft continues to advance their Xbox 360 platform with plans that include releasing an add-on camera so players can upload images of their scrotum as their gamerpic. Next week we'll have a special Xbox 360 camera review complete with pictures of my cock.