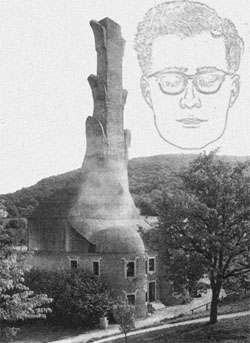 Dorroile, above his home.District occupant, your superiors require the mercy of your belief: believe you, oh please, that ordinarily we do not concern and baffle ourselves with the terrible boasts of Dorroile, the worst man. When he boasted that his awful dancing could curdle milk while still ensconced in a youngmother's teatwell, we rightfully scoffed, for science tells us that such things are unlikely. When he boasted that he win the loyalty of any bird with a simple whistle-and-tweet from his scandalous lips, and thus could command that bird to violently smirch the maidenhood of a lady's formal hen-wig, then too did we scoff-- some birds, yes, many times; many hen-wigs ruined and still more impregnated. But all birds? Verifiably not. His boasts and taunts no longer molest our minds, and you must believe us of that. We, your superiors, have learned to simply ignore him and turn our heads to his grotesque dancing and outlandish threats.

Recently, alas, a boast passed Dorroile's glistening teeth that could not be ignored. Our hearing of it was not perfect, said as it was in a noisome atmosphere of Dorroile's own devising, but reasonably certain are we of the general ideage: that Dorroile either has or is a god.

True? Oh, the negative remoteness of the chance cannot be exuberated enough. Naught but a mitsy sliver of chance, the odds slim as a beewing sideways-- but we cannot be sure, and Dorroile being or having a god is a risk your superiors cannot afford to gamble. If he is a god-- oh, forbid the notion-- then we exist only on his whim, and if we can no longer amuse him we will disappear, like floorbound motes of gristle tongued up by a giant skydog. And more horripilating still if he has a god! All his grifts and scandals, all his cons and ruses and jolly-me-fools, all co-conspired by the divine?

This jokelaw's god or godship is intolerable and hereby officially untolerated, immediately nowfore and hencewhile. But since he, with his divinity could undo our laws with a whim, or have his god do it, our action must meet his metaphysical threat on the loftiest plane: we must, after centuries of stogged secularity in our beloved District of reason, elect or invent a god of our own. Therefore, we have entreated some of our elected officials for proposals.

Goodmartin Asb deals in the breaking and tethering of lawdoffs. He has been elected to punish those who carry out offendations against our custom; he is responsible for tethering them to the pole, though he often gleefully overexerts his station with violence and terrible claws.

Tremble, cocklaw; my god is coming for you. Long have those who joked the law been subject to my brisk regimen of terror and retribution, and long has Dorroile escaped the grisly fingernails I file and buff into gleaming claws each morning. But no longer. My god will put an end to Dorroile's life as a lawjostle and a hedon. My god will use the principles of good to make Dorroile good.

My god is called Swimp and he is a cookie bear, which is just what it sounds like. He lives in the moon and he is bunny soft. Dorroile will be confronted by the good of Swimp and he will decide to be a more positive influence on children. Dorroile's god will probably be very moved by him too, and will become Microswimp, who follows Swimp and collects his leavings, which are cherries for hungry babies.

If Swimp does not convince Dorroile to be good, he is beyond saving and I will dismantle him with my terrible claws after all.

The people elected Hairbank out of fear, for he promised to overrun the town with wild animals if he were not elected to teach their children. Since his election, he has eaten many children. He is from the North, and he seethes with contempt for our culture even as he sucks the meat from the ribs of our youth.

But Big Hairbank is a good god idea, and he will give you lots of money. Please vote for Big Hairbank. He will also eat Dorrolloille or whatever this is about? Thank you.

Grandmartin Feiche is tasked with warding or destroying Croisquessein, the invisible man who annoys us by misplacing our keys and television remotes, leaving our wallets in beerstations after hours so we cannot pick them up until the next day, incontinating our beds as we sleep after a night of drinking and many other embarrassments.

I devote my many days to the warding or destruction of Croisquessein, our second worst enemy after Dorroile, but actually everyone hates Croisquessein and I admit that some people like Dorroile so maybe Croisquessein is our worst enemy. [Correctative notation from Bulletin Authors & Your Head Better Superior: nobody likes Dorroile.] Even such, science has taught us one thing: Croisquessein is either invisible or nonexistent, or both. This has made it so my job is very hard, because these qualities are not things that make him easy to ward off or destroy. I have met with no success at this job and I'm sorry, but nobody ever has. It is also because Croisquessein is always coming in and making me lose my pen and my science thing.

So, I think that we should make Croisquessein our god. Maybe he will be appeased by it and direct his attention toward thwarting Dorroile and his god, and he will maybe stop coming into our places of work and misplacing our supplies. Or, if he is nonexistent, maybe he will just be flattered by it.

Goodmartin Fantsy is responsible for the runnings and circumstance of our district in general. He does the most things of anyone.

I have the best god for us. He is a fire god, tall as a tree, made of concrete and orange tar. He has antlers and Dorroile is very afraid of him. He is called Eaticus and he exists to eat Dorroile, to eat his misdeeds and maldoings, to eat his memory from the minds of children or ladies and to devour the scandal of his horrible, slapping dance. He is smarter than Dorroile and will eat Dorroile and make him feel bad.

He will destroy Dorroile, slavering his slobberchops upon the blood of him even as the cocklaw still shrieks and moans, begging to atone for all the wrongs he perpetrated upon innocents like your Claude Fantsy. Dorroile will apologize for all the scandals he printed on ladies, like a dirty chocolate thumbprint upon the windscreen of a car, which he also did to me.

But who will stop Eaticus when his deed is done? Will his demon tongue be slaked with the blood of Dorroile, or will he hunger yet for fresh nourishment, the nourishment that can only come from the nutritious pulp of innocents? Eaticus will destroy us, for that is his nature, but we will die in happy reverie, plus the agony of being pulped, as we will know that Dorroile met his justice and our Head Better Superior is vindicated. Vote for Eaticus and vote for best evil justice. Thank you.

This bulletin is now over but for a regrettable formality: by principle of fairdom, Dorroile must be allowed in this bulletin to speak his mind regarding his own god. Please, your superiors beg it: do not be moved by Dorroile's words, because he is the worst man and he will try to trick you; he is smarter than you and always wins. Please. Legally we cannot tell you to skip his bit, but please.

Dorroile is the worst man. He is a one-man scandal that sootiesthe entire district with his pranks and ugly games and nasty dancing. He eats spoiled food to amuse drunks. He never opens his eyes. He is a little taller than everyone and a lot smarter. He is loathed universally. He teaches ribald songs to tramps and they sing them outside of our homes at night, so loud.

I do not have a god and I am not a god, and I find it very funny that somebody thinks I am a god or have a god. I think I probably was saying that I stole a hod, which is a thing we use to carry bricks and loam and things around town-- I recently stole a hod and filled it with squealing women and then took them around town to show. Then I ate a chocolate and put a melty chocolate thumbprint on Claude Fantsy's windscreen, right at the exact apex of his vision, where it will taunt him always because he will never remember to clean it.

But now we are electing a god and it sounds good. I think we should all vote for Swimp. I am casting my support for Swimp, the cookie bear, who lives on the moon. Swimp will be our new god, because I know you will all vote for him because you will do anything I say. Thank you, I hate you all, I am going to steal something from your house tonight. Praise Swimp.

Consider this your ballot, youngmartin, and compel yourself in one week's time to visit the Weep of Desperation, by the former site of the panther statue (now defaced by Dorroile himself) to vote. 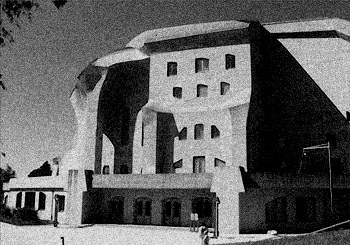 The Weep of Desperation