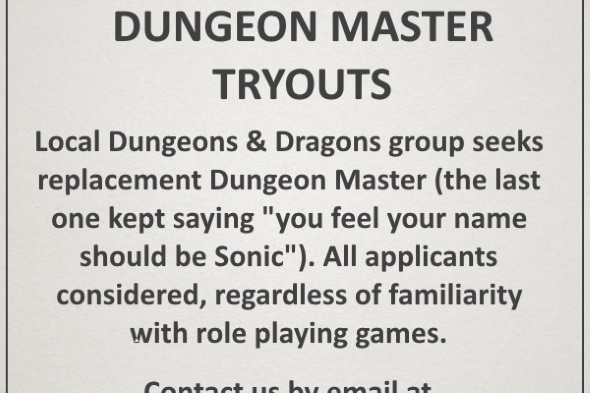 (At the applicant's request, this tryout was conducted via online video chat)

We are go for adventure commencement.

Intel confirms your party has exfiltrated the city of Neverwinter, where they stocked up on supplies and scouted several quest leads.

Sensors indicate movement on the horizon. Could be gnolls. Gnolls are known to move. While you discuss what to do, I go weapons hot. Confirmed hit. Unidentified targets down.

Disabling your audio. Your party is too close to the action to make real-time decisions.

Actionable intel suggests sighting of a cutpurse within Neverwinter. Going weapons hot on the entire city.

You see some rather cool dudes on the side of the path. Nothing unusual. No need to pay them any mind. Best keep walking.

Perception check? Okay, I guess. It's a difficulty of twenty. And you rolled a... great. Fine.

Upon closer inspection you realize these are three exceptionally cool dudes. They're just hanging out. What do they look like? They're... thinner than you. Less fleshy. All three have a timeless, chiseled look. Best move on before you start to feel jealous. Nothing ruins a good adventure like heroes who feel inadequate.

Weapons? Well, all three figures are carrying shields made of broken barrel lids. Their swords are rusty things trailing streamers of cobweb. Probably nothing to be concerned about, just self-protection against bandits.

No, you can't attack. No. This isn't Dungeons & Attacks.

The road you're standing on is made of quicksand. Your only hope for salvation is to beg the three cool dudes for help, in exchange for a promise to never attack them.

Well, then, the quicksand is made of poison.

After a hard week in the wilderness, your party spots a small countryside inn. Golden candlelight leaks through open windows and gaps between the crooked planks which barely hold the building up. Your spirits are uplifted by the inviting swirl of boisterous conversation. You approach the door and attempt to open it.

You fail to open the door. It's okay, guys. You still get three more tries. Before making your next attempt, your party stands around in a loose circle for thirty seconds whispering to one another.

Roll a strength check again. Got it! You thank god and Jesus Chri- *consults sourcebook* Tyr. You thank Tyr for making it possible to open the door.

You enter the inn. Without a word exchanged, the barkeep slides an ale down the counter. Rogue, roll a dex check. Nice. You succeed in catching the mug. As fair payment for this feat, you get ten million gold.

We have some breaking reports about the cave you have entered. The situation is fluid, so as always please keep in mind that some details may change.

Caves are dark. They don't have sunlight because the rocks and dirt form a roof, effectively blocking the sun's illuminating rays. We believe this cave has at least one entrance. Share your cave thoughts to us on social media.

You discover a trap.

Hold on, we're getting more information on that cave we mentioned before. For those of you just tuning in, a cave is a dark place with rocks or dirt that keep the sun out and make it difficult to see.

Our update is this: We confirmed there was at least one cave entrance. Now there's word that there may be two, and possibly as many as three entrances to the cave.

Keep in mind that cave entrances can also be used as exits. They are, essentially, holes that you can walk through if you are smaller than the hole.

Back to the trap. It was probably laid there to trap someone or some thing. It's likely that this trap has moving parts.

My producers are telling me that the cave may have four entrances. I'd like to stress, however, that we can only confirm one entrance, which is probably the one your party used to enter the cave.

Players, please hold on. We are now joined by an expert on caves. Ma'am, can you please tell us more about why a cave blocks the sun's rays?