Ladies and Gentlemen, if you are reading this, I am dead.

No, I didn't choke to death on my own vomit after watching a video of a fat man pooping himself, nor did I hang myself from a support beam in my garage after watching yet another yiff-tastic furry abomination. Most surprising of all, I didn't cease to be after my rage and hatred became so concentrated that they collapsed and formed a black hole of misery that swallowed everything within a 50 mile radius.

No, gentle friends. If you are reading this, I have been killed by CrowfeatheR. 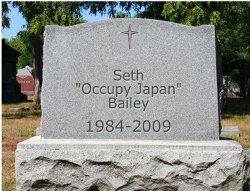 At least I died doing what I loved: getting murdered by a 40-year-old pedophile with a soul patch.I do not yet know how it happened. Perhaps he ripped my arms out of my sockets and beat me to death with them while shouting 12 year old Dwayne "The Rock" Johnson catchphrases. Maybe he popped my head like an overripe pimple with his "19 inch pythons" and then slapped me with a DMCA for using his pictures so hard that it snapped what was left of my neck. I may have even gotten lost in the jungle of his pink soul patch and starved to death or perhaps was eaten by whatever fauna are lurking therein (probably a tiger with a chinstrap beard, a "shocker" t-shirt and a pot leaf belt buckle). Heck, maybe my death was as mundane as having my face melted off by one of CrowfeatheR's weedley-weedley-weedley guitar solos on one of his dumb piece of shit metal guitars.

Ultimately, it doesn't matter how it happened. I am dead; my "shit" thoroughly "wrecked" by CrowfeatheR.

"Who is CrowfeatheR", you ask? Come, my friends. Journey back in time with me - two weeks to be exact - to when I first met CrowfeatheR and my life was forever changed. And ended. I am dead.