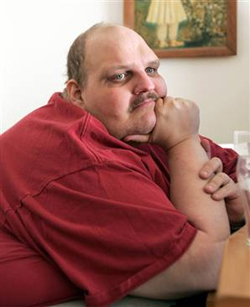 Hello, world. I am a victim of food. It's crippled me to a bedridden state, leaving me this journal as my only outlet for the pain I feel, which is mostly in my lower back. Did I ask to be a 1000-pound man? Did I ask for an entire birthday cake covered in pepperoni slices? Actually, I did on that second one. It was very good. Note to self: ask mom if there is a way to combine pastry and sausage. If not, tell her I have a disease and that she needs to find a way to do this.

Today I saw something that brought a tear to my eye, and later to my mouth. It tasted like Pepsi. It was hour 17 of TV time, and on the screen I saw a guy leaning against a brick wall. Leaning. Perhaps the greatest word in any language. I dream of the day where I can be upright and motionless instead of on my back and motionless. Can you believe that the Make a Wish Foundation rejected my idea of napping while riding a Segway because it was "physically impossible?" They also had a "problem" with the fact that I am 38. The obese are the Jews of the 21st century. Except we'd make a lot more candles. 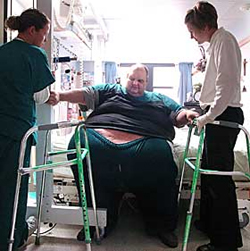 Mom and two social workers rolled me onto the coffee table after leaning it against the wall because they got the bright idea that I wanted to try leaning. Yes, I told them that I wanted to try leaning, but that was my disease talking! Now half of the table is stuck in the wall and the other half is getting removed from my body by surgeons over the next three days. Idiots!

My body is now free of all non-ingested glass shards. They thought they found the second table leg, but it worked its way so far in there that now the doctors can't tell it apart from my ribs. So they're leaving it in there. Now I'm sort of like a cyborg! But there is no James Cameron here to film my epic struggle.

Today I wrote a letter to the Giant Eagle company about the quality of their trash bags: 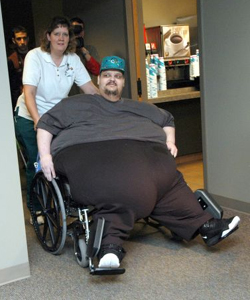 As a constant user of your brand of trash bags, I am appalled by your treatment of my demographic. You see, some people out there (as hard as this may be to believe) do not wear pants because these people are hyperobese. Their lifestyle and girth do not accommodate fabric in that area. I am afflicted with this condition and have been for the past 17 years. I use your trash bags to tie around the end of my legs. Or should I say, I used to! My legs are effectively dead, and your bags keep away airborne bacteria and pests who would make a meal of my decaying thighs. However, thanks to the shoddy seams and ineffective drawstrings of your trash bags, I have lost two toes in the month of November alone! Some people aren't lucky enough to have blood pump to all of their body parts. I hope you will remember this in the future.

P.S. Please bring back your festive red and green-colored bags. Christmas is right around the corner!

I had better get results.

My nutritionist was telling me I need to eat at least one serving of vegetables per day. Nazi. I told him I'd eat anything he wanted me to as long as it was between two waffles. Game, set, match, right? Wrong. Later he brings back some whole grain waffles. What is with this guy? I upped the ante by telling him the waffles had to be the chocolate chip ones with the syrup inside (because sometimes I like to have two kinds of syrup with my waffles). I bet myself eight 2-liter bottles of Pepsi he quits in a week.