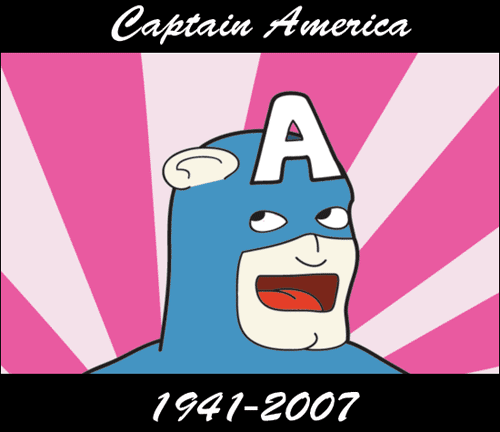 Captain America is dead. Gunned down on the steps of a courthouse as he was about to testify against the kingpin of The Gang That Guns People Down On Courthouse Steps in the latest issue of his comic, our most patriotic of superheroes has departed this world for the big America in the sky. Marvel hinted that a new person may step in to take his place in the future, but the original man behind the mask, Steve Rogers, is gone for good.

In memory of the Captain America we all grew up with, let us reflect upon some of his finest comic book appearances and hope that there are bad guys in heaven just waiting to be pummeled with a shield. 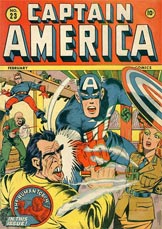 "Captain America Vs. The Nasis"

Having punched every Nazi in Germany square in the face at least once, Captain America returns to the U.S. and looks up "Nazi" in his phone book. This leads to Cap mistakenly squaring off against an innocent middle class family with the unfortunate last name of "Nasi".


Mitch Nasi: You're going to punch my dog too? It's bad enough that you assaulted my wife and children!
Captain America: Sorry, Fritz! I guess now the only trick your mutt will know is (uppercuts) PLAY DEAD!
Mitch Nasi: That was my daughter again! 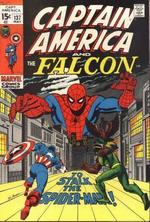 "Attack Of The Impossibly Large Spider-Man"

When one of Spider-Man's scientific experiments goes horribly wrong, he becomes 74 feet tall! And evil! Will the combined forces of Captain America and the Falcon be enough to stop the gigantic webbed wonder? How does the mysterious appearance of 74 foot tall photographer Peter Parker tie into everything? 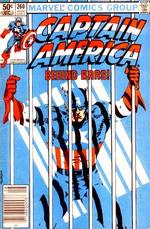 During a field trip to Alcatraz with the Avengers, Captain America steps inside an old prison cell to pose for a picture - and gets left behind for the weekend!