Pepsi time! I normally only have seven bottles during the day, but this is a little treat ;) 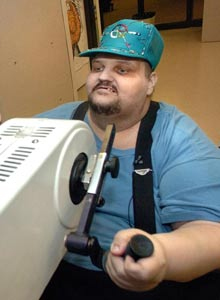 Oh shit. I just realized my catheter has been out for three days. This can only mean there is a reservoir of urine pooling somewhere on the surface of my body. Ugh, the guy from the hospice is going to be such a dick about this like he was the last time this happened. He thinks he's all high and mighty because he got to leave his house during the 90s. Heh, maybe I'll forget about it until next month. After all, that clod Jeff took a vow to help the sick. I answer to no one.

I hope someone comes to turn me soon.

Tony's Pizza just lost a customer. There must be a new guy there, because whoever came to my house did not understand my "bucket on a rope" policy. It's simple. You throw a rock at my window; I reach over, open it, and lower down a bucket with money in it. You put the food in the bucket and get the hell out of my sight (if I could see you). But no, this jackass rings the doorbell, which makes my mom answer the door, and that is exactly what my bucket method is meant to bypass! I just got bitched at for being a "Greedy Gus who orders a sheet pizza after eating six steaks." Mom brought me a tub of Rocky Road later, though, so I'll forgive her… this time.

That turd from the Department of Health and Human Services came back, and this time he brought his little crane. Oh Doug, haven't you realized that no crane can hold me? And there's no way my mom would let you knock down that bedroom wall for a fourth time. Advantage: me. 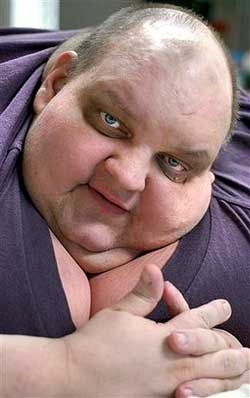 Christmas is here, but I'll never get what I really want. Mom says there is no way to cook that much bacon. At least, not with the deep fryer she has now.

Those jerks from The Learning Channel are back again to do yet another documentary on me. Yawn. Oh, and aren't documentarians supposed to not interfere with the lives of their subjects? It seems to me that yelling "You're killing him!" to someone's mother while she feeds her son mashed potatoes just might violate this principle. I was also a little annoyed by all the gagging that one cameraman did. Yeah, that's a colostomy bag. I don't see you coming over here to empty it. Sheesh.

I'm a little worried. While reaching for my giant Pixy Stix, I felt a bedsore that was much larger and creamier than my normal ones. Did I roll onto some boxes of Hostess Cupcakes and not realize it? I sure hope so. It itches like hell.

Sores hurt so I itch them. They make cake and cream. Mom make ugly face so I itch her too.