About a fortnight ago, I was jolly chuffed to discover a brilliant form of communiqué. Gather twixt, gentle readers, for to hear my tale! I was seeking counsel regarding Mrs. Palfrey at the Claremont, which I'd read about in the daily news. It looks like a spot of fun! Yet regrettably, I keep a humble flat in the village of Harby, where that noble monarch Film seldom knights us with its presence. I queried one of the ruffians who plays football in the street: "What ho, lad! I say, where might I find a coliseum for movie discourse on the online Web? Hark, aim me truly to cinematic Camelot!" This towheaded snapper was a bit saucy, but after taking the piss out of me for a spell, he told me "Flixster," which I fretted was a mere rubbish word. "Codswallop," I muttered. But, lo! Once I'd transcribed that mystical password "Flixster" between the miraculous triumvirate of "W"s and the portentous suffix ".com," well, sure as Bob's your uncle, I transported haughtily to a fantasy realm!

When I typed "Mrs. Palfrey," this contraption instantly concocted a rating of four-from-five-stars, the collective verdict from 373 interlocutors. Some of these appraisers supplemented their numerical judgment with pithy summaries: Quoth the knave OOFilm, "I was in a reali weird mode...and for sum reason i reali felt a connection with this film a magic simplicity bout it!!!" (While I found his syntax and spelling queer, I soon realized that I am not privy to the jargon of these Cyber-net blokes.) Near where these critics opined, I found a photograph of Joan Plowright, a right bird about my age. Below her venerable image was a smashing sight -- a flock of young spankers having the chatter! I found it peculiar that these children would gather to discuss the queenly Ms. Plowright: Should they have a go at desecrating her surname, I'd surely throw a wobbly. But bugger all, they weren't even debating Ms. Plowright's merits. Blast it, damned if anyone mentioned films at all!

Having enjoyed many the lazy labyrinth of conversation down at the Harby tea house, I guessed these yakkers were just taking a tangent. Assessing those assembled to be about grandchildren age (oh, would that I had any!), I conjured a contemporary reference from the mother country that I just knew would warm their cockles.

Much to my brass, no one remarked upon my bespoke recommendation. Instead, people raced to propose alternate topics, as if that charming jester Mr. Bean were some hideous spectre they couldn't wait to exorcise. 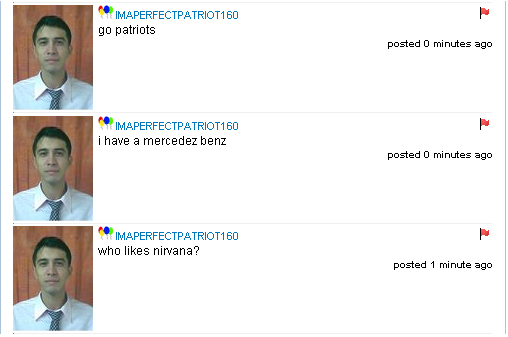