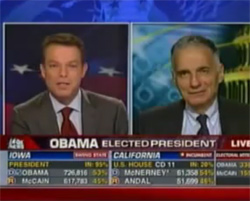 Nader, America's purity troll, hauled his droopy stroke face in front of the Fox News cameras and slurred out a defense of his accusation that Obama is an "Uncle Tom" for aligning himself with the "corporatists."

This prompted breathless indignation from Fox host Shepard Smith, who has probably sat smiling while Tom Delay referred to a milquetoast democrat as, "The gibbering sub-humanoid result of a failed abortion raised by rats living in a medical waste dumpster." Shep scoffed at Nader after the segment ended and shook his head like Obama hearing the word "nigger" slip from the rhymes of Nas.

"Why would he end his career like that?" Shep wondered. He was apparently unaware of the old adage that, "The arc of Nader is long but it bends toward LaRouche."

Paroxysms of anger are de rigueur among the peripheral right and the left of the political spectrum. After a momentary flash of joy at Obama's election the melodramatic cretins on TV and on the blogs began to gnash their teeth that Obama had chosen Rahm Emmanuel as his chief of staff.

Republicans, who moments earlier had clasped their flag pins and acted as if they were a part of the beautiful America that had elected the first black president, viciously turned on Obama and pointed to Emmanuel as proof that Obama was no bipartisan healer.

A simultaneous cry went up from the baby's first president coalition in the blogosphere. They were enraged that Obama selected a filthy member of Clinton's Democratic Leadership Council. Emmanuel once said mean things to Howard Dean, their patron saint of ideological purity and abject failure, and thus he was persona non grata. 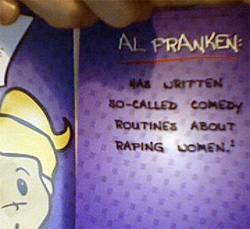 When word was leaked that economist Larry Summers was in contention for an Obama treasury appointment the liberal blogs practically rioted. Do you know why? Because in 1991 Larry Summers wrote a Swiftian satirical memo proposing shipping pollution to the third world that was taken seriously by the humorless babies that man the ramparts of the left.

There are legitimate reasons to criticize Summers, but fake or moronic indignation over his 1991 memo makes me hope evil humorist Al Franken loses his Senate recount just so a couple of these people realize what they have become.

These outbursts, from the right and the left, are just the blurt of some bad brass heralding the coming onslaught. Having run a two year gauntlet to the presidency, America's first black president now has to run a two month gauntlet of screaming complaints on issues ranging from the inane to the insane.

All too often when the future is realized it fails to live up to its promise, but sometimes it's our dreary world that just wants to hate the flying car.