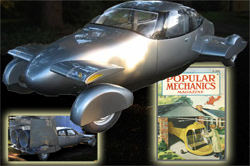 It's not too often the present catches up with the brighter side of the future. Oh, sure, it catches up plenty with the dreary dystopian future. Smog choked skies, militarized police forces, endless high-tech wars, and vat-raised Olympic gymnasts are a dime a dozen.

It's the shiny, some might say naïve, optimism of the future that is difficult to obtain. The far-fetched, world-changing innovations like the electric highway, cold fusion, sex robots, and the flying car are always just out of reach.

Yet here we are. Against all odds we have somehow seized the future and we have elected a black man. Barack Obama.

Cooked up in a Frankenstein's lab filled with strange silver spheres crackling with electricity. Alchemically mixed from vials and test-tubes of bubbling liquids labeled "Kenyan Dad" and "Grandma's Bomber Assembly Line." Even his race seems futuristic.

Obama was raised by sensible whites who instilled in him all of the wizardly knowledge of white greatness and then he unleashed his magic on the chocolate streets of Chicago, levitating the downtrodden and scrying a better tomorrow. 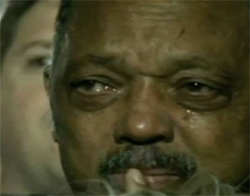 As Master Yoda sobbed, just another face in the crowd of millions, Obama took to the stage in Grant Park and reminded the world that we can still catch up to the future. Two days later, we have been repeatedly reminded by the media and by political activists, that the future is the ultimate Christmas present: once opened it will never be as magical as it was during the unwrapping.

The inevitable disillusionment is already beginning to creep into the more liberal supporters of Barack Obama. Next to the bottled tears of vanquished republicans, the sweetest liqueur is distilled from the liquid eye-farts of the far left. Lefties are as perpetually aggrieved as evangelical Christians and as self-righteous as the flag-sucking dimwits who organize counter protests whenever there is a rally against war.

Lefties have a PETA-like commitment to making you despise what might otherwise be a rational cause.

Take for example, Ralph Nader, who once again placed his thumb on the scales of the neoconservatives and their beloved wars in his misguided narcissism to prove a point about the two-party system in America. Having tipped a couple peripheral states like Missouri away from Obama in what was otherwise a landslide, Nader was eager to gain the spotlight and provide a cold bucket of water for anyone enamored with their new flying car.