Video game worlds are populated by player characters, the enemies they fight, and you. You're an NPC, the everyman who keeps his head down and does his best to get through the day without being gibbed by a stray blast of plasma. Despite your best efforts, however, your maximum lifespan is 8-10 hours, with a 35% chance that you will die a gruesome and hopefully entertaining death within the next hour.

Want to know how much time you've got before your 1 turns into a 0? Assuming you have a full ten hours to enjoy life, add or subtract the indicated amount of time from your lifespan for each of the following statements that can be applied to you.

Note: It is not uncommon to end up subtracting more time from your life than you started with. This means that you are already dead. 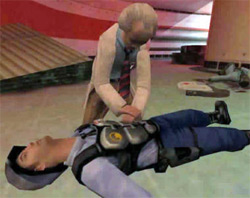 - 3 Hours and 40 Minutes
I enjoy capturing my thoughts in great detail through the use of audio logs, video recordings, journal entries or e-mails. When I'm done, I tend to leave them out in the open wherever I happen to be standing.

+ 10 Hours
Don't mind me! I'm just here in the bleachers, repeating the same stupid cheering motion and generally being blurry as fuck.

- 7 Hours and 1 Minute
That blood-splattered hearse with spinning sawblades mounted on its front bumper is traveling awfully fast on the wrong side of the road. Then again, the little guy on my crosswalk signal is glowing green. Sorry buddy, but pedestrians have the right of way.

- 4 Hours and 57 Minutes
I look forward to saying "I think it's safe now..." or "Follow me!" and then stepping out of a fortified position into the open at some point in the future.

- 45 Minutes
While going about my daily business, I frequently encounter people who look exactly like me.

- 3 Hours and 12 Minutes
Hell yes, I voted on Proposition 51! I get a nice break my property taxes and the government gets to experiment with an interdimensional gateway a block away from my house. Everyone wins.

- 2 Hours
I really need a message delivered to someone that lives a half-minute walk up the road, but I think I'll just stand here until I find someone that's willing to do it for me.

- 4 Hours and 20 Minutes
The city I live in is so open-ended and chock full of things to do that it might be described as a sandbox, and I have no qualms about yelling insults at men who walk down the street wielding rocket launchers.

+ 10 Hours
I am a child in a console game, or in a PC game which cannot be modded by creepy men who wear extra large t-shirts with clever phrases printed across the front and read internet forums for more than an hour every day.

- 6 Hours and 42 Minutes
After helping the player character accomplish his goals without showing a hint of personality, I'll recount a heartbreaking/heartwarming story about my past or mentioned a loved one that I cannot wait to get back home to.

- 10 Hours
I am locked inside a room with an indestructible window that the player character is sure to saunter past.

- 3 Hours and 15 Minutes
The main villain has promised to let me go unharmed if I carry out a menial task that only I can complete. I trust him fully because he did, after all, give me his word.

- 5 Hours and 30 Minutes
Upon discovering a curious new species/mutation/alien technology, I think my best bet is to study it myself without telling someone that actually knows what the hell they're doing.

+ 10 Hours
I pilot a rescue aircraft/spacecraft that specializes in narrowly escaping the blastwaves of humongous explosions.

- 1 Hour and 9 Minutes
I am relaxing on a journey through uncharted space aboard a colony ship that the player is not on.

- 30 Minutes
Walking into player-owned sim homes uninvited, eating all of their food, and arguing with them for hitting on my hot wife is my idea of a good time.

- 8 Hours
A full-scale alien invasion has begun, and I am sightseeing at the Statue Of Liberty, Golden Gate Bridge, Eiffel Tower or pretty much any building in Washington, D.C.

- 2 Hours, 10 Minutes
Wait, the person that's been helping the player character was bad all along? I'm going to go give that jerk a piece of my mind and let them know that I'll be reporting them to the proper authorities as soon as I'm done talking to them.

- 3 Hours and 59 Minutes
Sure, the player character is massing an army of mastodon-mounted laser knights just outside the border to my village, but last I checked our nations had a peace treaty. Besides, we just wiped every other nation off the map. We're a good team.