As the shit hit the fan earlier this month in New Orleans, and more recently in Texas, Fox News was there every step of the way. It is a true testament to the caliber of their journalists that they were able to cover one of the biggest tragedies in US history and still come off as maudlin, affected, and melodramatic. The public has sent Fox News a clear message: More please. From Geraldo's weeping to Shepard Smith's unnecessary bravado to Greta Van Susteren's bewildering gender disorder, viewers couldn't get enough.

You spoke, they listened. This fall Fox News is introducing a re-vamped Monday night primetime line-up sure to tear your Tivo a new asshole and leave you salivating in your britches. The general public isn't privy to this info just yet, but I managed to finesse my way into Rupert Murdoch's fortified compound, which is buried 70 feet below a KFC in Sydney, Australia and abscond with a folder containing pitches for several new series in their Monday Night Maniacs line-up. After removing almost 70 instances of the N-word, I was left with what you see below:

Ouch! My Face With Shepard Smith

For Fox News personality Shepard Smith, spitting in the face of the status quo is all in a day's work. Whether it be committing aggravated battery with a motor vehicle because of a dispute over a parking space or saying "blowjob" during a live broadcast, this primetime prettyboy has never been afraid to shake things up. Over the past month, he managed to push the envelope harder than it's ever been pushed before by covering hurricane Katrina using nothing but his own face. In doing so he uncovered stories that couldn't be found in the socialist media. Stories such as: 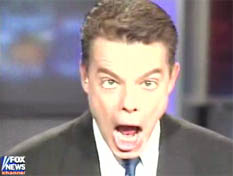 "The harder it rains the more my face hurts!"

"This rain is really stinging my face!"

"I've been measuring the intensity of the wind by whether or not I can stand up, as you can see, I'm having a little trouble."

In "Ouch!", Shepard takes his unique approach to journalism one step further, tackling hot button issues by placing his angelic mug directly into harm's way every single week and translating complicated topics into the universal language of blinding agony. Be sure to tune in to the premiere episode, "Bees, a sandstorm, and falling in gravel" this Monday at 8pm. If you can successfully count the number of backwards hats that get blown off of his head during the course of the episode, your name will be entered in a drawing to win a free "I'm with Hannity!" t-shirt.

The life of a Fox News anchor is stressful and fast-paced, to be sure, but that doesn't mean you can't have any fun. Even the stern and straight-laced Greta van Susteren likes to let down her hair every once in awhile and just have a good time. In Greta's Graphics Grab Bag, Fox News is giving her exactly one hour at a rigidly scheduled time to do just that!

The Grab Bag is a nonsensical mish-mash of logos, headlines, 3D animations, and impossibly small picture-in-picture boxes filled with logos, headlines, 3D animations, and smaller picture-in-picture boxes, which is what makes it such a refreshing change of pace from the standard Fox News fare. Occasionally Greta will come floating in from the side of the screen and try to yell over the urgently and incessantly thumping background music, but you won't be able to make out anything intelligible so don't waste your sanity trying.

To add to the playful "anything goes" feel of the show, the news crawl at the bottom will be "guest hosted" by a new elementary school class every week. They will be invited to type whatever is on their little minds at the time. You can expect lots of non-sequiturs, horrifyingly frank discussion about shit, embarassing references to parents covertly fucking, and adorably simplistic musings about Jesus.

Here's a teaser to whet your appetite: 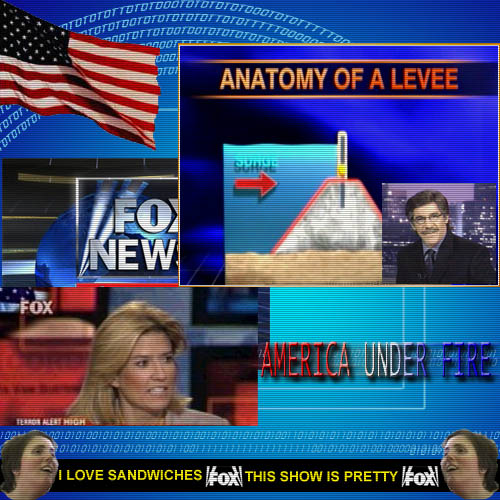 Geraldo Rivera is considered by most of America to be one of the true "Giants of Journalism." A living legend whose compassion and dedication is unrivaled in the business. With a distinguished career spannin


In a world where spin is the norm and you can't trust anyone but yourself, it's good to know that the crew of committed truthseekers at Fox are looking out for us. God bless and goodnight, America.

What do you get when you cross John Daly and Joe Dirt?

A whole lotta nothin', that's what!