Requiem For A Dreamcast

My wit is a very dull implement. I'll never be a good writer. That's okay though because the key to happiness isn't self improvement but self acceptance. Take Charles Manson for example. Every morning he looks in the mirror and remembers he's a horrible monster who orchestrated unspeakable acts of murder and torture. It doesn't bother him, though. Why? Because he loves himself unconditionally. If Charles Manson can love himself unconditionally then so can I.

I've finally found someone who understands how I feel. No, it isn't Trent Reznor or Maynard James Keenan or any of the music industry's designer saviors - it's a girl I know. Do my dreams about Girl I Like deserve to be fulfilled? Does having the capacity for happiness entitle us to happiness?

I loved the conversations I had with Girl I Liked. We didn't just talk to each other, we listened to each other. Girl I Liked was a goddess. In a previous life I was a vortigon slave building immense shrines to her beauty.

"What the hell are you playing on the stereo?" my coworker Nate said. "Is this Vaginal Mutilation Fetish by Smash My Brother's Face In?"

"I thought it would give us a beat to work to." I said.

I trusted my coworkers. Teamwork - that was the Mcdonalds advantage. My cash register was waiting for me and I knew there was no order I couldn't take. I could smell the aroma of freshly cooked 10-1 patties. It smelled like victory.

I'll always remember the time I made a customer feel sorry for me. He was asking me demeaning questions in a tone of mock friendliness when out of nowhere I shot him this wounded look. He never even saw it coming. Needless to say he promptly apologized.

My dad asked me when I had become so disgruntled. I told him that I had always been disgruntled, that I was never gruntled to begin with. That wasn't entirely true. There once was a time when life had all the limitless potential of an empty Worldcraft grid. You may have noticed I lament the loss of my childhood a lot. Am I crossing the line into adult babydom? Seeing as how I also went out with a girl who liked wearing diapers, probably.

Another Saturday night found me alone in my room. I had some percocets but I only used them socially as using them by yourself was a recipe for lonely. I decided to spend the night browsing the internet. The best part of Metallica's new album was downloading it. It was all downhill from there.

I no longer held any grudges re: the flamewars I got into during my mapping days. It was all func_water under a bridge as far as I was concerned. On a whim I entered the URL of planetquake only to find it had become a horrible cataclysm of flash ads. It was intrusive advertising on a level heretofore only seen in the cyberpunk genre.

"Eminem may call gay people fags but at least he doesn't call mentally challenged people anything." I said. 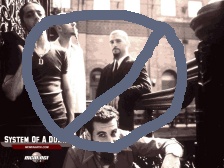 I was browsing through the magazines at Borders. THIS MONTH IN WOMAN'S WORLD: IS HE CHEATING ON YOU? NEXT MONTH: IS HE A DEMON LOOKING FOR A HUMAN WOMB TO CONCEIVE THE ANTICHRIST? The person next to me had a trenchcoat and lots of piercings. When there's no more room in Hot Topic the goths will walk the earth.

I was standing outside the food court at the City 17 mall. The goths didn't come here to smoke cigarettes anymore. It was just as well since I didn't like being around people. It was difficult to tell how much of said dislike was Jean-Paul Sartre-esque existentialism and how much was just social anxiety disorder.

I didn't like public places. I knew my social anxiety could eventually lead to suicide or, even worse, a lifetime of awkward dorkdom. I was filled with tension as I walked down the snack aisle. Fun Fact: Slim Jims are named after the snack's inventor, James Marshall, who has anorexia.

My friends won't let me move in with them. I saw friendship abandon Everyman in the allegory of the same name so why then was I so surprised when it happened to me? Et tu Justin and Brannen? I hate myself for letting you hurt me so easily.