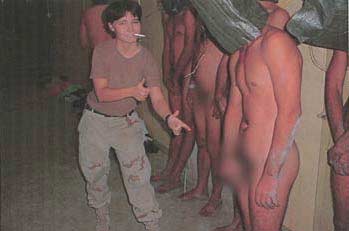 Yesterday a military court found Private Lynndie England, a sort of David Lynchian take on Gomer Pyle, guilty of abusing inmates at the Abu Ghraib prison. The prison abuses, which by all accounts were extensive and creative, have officially been rectified. Justice is served and everyone can go home happy (except for the people still in prison). In the off chance you were one of the poor suckers that got photographed nude next to the adorable England, you can sleep well tonight for your tormenters have been brought to justice.

Now that justice is out of the way, my main concern regarding Lynndie England is her parenting skills. During that crazy ordeal, she got herself knocked up by her commanding officer. When she gets out of prison and back to her child, what kind of mother will she be? We've all seen those pictures of her pointing at the genitals of naked detainees and laughing. That's not the kind of thing you want in the family scrapbook. She doesn't seem very encouraging, and I fear her parenting skills may be sorely lacking, if not altogether dead. Is she going to pull that kind of crap while changing diapers? Besides that, war crimes are a vicious cycle. Children subjected to war crimes often grow up to commit them, and we need to stamp this problem out at the source. I just made that fact up but hopefully it's true for the sake of this update.

Of course I'm being sarcastic there, because as a child of the Internet, I know nothing but negativity. I truly believe the abuses that took place in Abu Ghraib were not the work of a few rascally bad apples, and that higher ups were most likely aware and complicit. Otherwise, they were negligent and not paying attention, which is bad in its own right. The fact nobody major has taken any responsibility or heat for this case undoubtedly looks bad in the eyes of the rest of the world, especially Iraqis. Because of this, I purpose we also blame the shameful actions of Abu Ghraib on former FEMA director and current FEMA payroll recipient Michael Brown. It's a one-two punch really. Nobody likes that guy as is, and he's a real pompous jerk to top it off.

Speaking of Michael Brown, he's now blaming every single person except himself for the horrors that unfolded in the Gulf Coast – that being Geraldo Rivera and the government's abysmal response to handling Geraldo Rivera. Also there was a hurricane that tore through the region like a gigantic elemental Pac-Man and then a miniature post-apocalypse. While I don't think Brown is solely to blame, I think he's definitely an idiot and a failure of a man on every level. I would like to see him catapulted into something hard, like a giant mound of peanut brittle. But knowing how this world works he would end up hitting something soft, like the whiskers of Geraldo's mustache.

Prior to the hurricane, the only things I knew about Louisiana was that its government was riddled with corruption and that Gambit was from there. I don't fault the state and local governments because I had no faith in them to begin with. Besides, they were sitting around a giant sewer after the disaster. I find more faults with the people that had military and national resources that sat around outside the sewer while Americans died and tore each other apart. A friend of a friend of mine was in the Superdome and he said people there resorted to cannibalism and idol worship. Also, he's not entirely sure, but he thinks there may have been at least one great train robbery. This was a month before the hurricane, though. I can't imagine how bad it was during and after the hurricane. 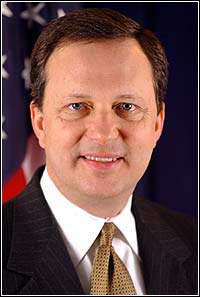 I'm glad it's finally okay to play the blame game because I was worried that wasn't going to happen. I'm going to get a giant foam hand with finger sticking out so I can point and root for the blamers and the blamed from home. Deep down inside, though, I know no one will ever be held accountable and that my foam-powered pointing will be an empty gesture aimed at nothing. At the very least, it will serve as a sponge for my tears. Then I'm going to jab Scott McClellan in the eye with it for being the most obnoxious human being ever created. Hopefully my tears will strangle his tears in the process.

Personally I feel compelled to blame the elderly, handicapped, and poor citizens for not taking the opportunity to prove the impossible is possible, that miracles can and do happen. Look at the miracle unfolding in Iraq right now. Under Saddam Hussein the country was a totalitarian state with limited freedoms, harsh punishments, and oppressive conditions. Now it's miraculously changed into a giant exploding tinderbox with a bunch of rival factions trying to claim ownership of the oil, because that's probably the only thing that isn't going to be completely owned by foreign companies. While the new government argues what exactly the government can and can't do, lots of tourists with guns have come by to shoot at people and set off bombs. They weren't there before, so that's a brand new threat we inspired. I hear that we had to go into Iraq to fight this new threat there so that we wouldn't have to fight them here. I know my neighbor wants to kill me and I'm going to prove it by murdering his family.

I'm not sure how many people have to die before the victims of 9/11 have been properly avenged, but I hope it's not that many more. I won't deny that these wars help my geography skills a great deal, but it's just not worth it to me. I also hope that the people that were killed in the process of avenging the victims of 9/11 don't have to be avenged themselves, because this could get very messy. I can't remember if we declared "no avenge-backs" before we went to war or not.

Some of the people that botched the war in Iraq got medals. I hope the medal Michael Brown gets is made out of dog crap and I hope the strap breaks shortly after it goes around his neck so that he has to bend over to pick up his dog crap medal. I hope his pants rip when he does that, too. Then I hope a pretty lady sees him and laughs at him. Basically I just hope he has the worst day ever and maybe misses his bus and has to walk all the way home. In the rain.

Speculation that Karl Rove outed a spy has kind of died down and everybody has forgotten that he or one of his coworkers committed light treason and that the White House flip-flopped on whether or not they would fire "anyone who has anything to do with it." Wasn’t that giant emotionless robot John Kerry demonized for flip-flopping? I specifically voted against him on the sole basis that he flip-flopped on something or other and could very well flip flop again. I hate flip-flops and prefer regular shoes. I have a special place in my heart for shoe phones. Don Adams recently died, and he will forever be remembered as TV super spy Maxwell Smart. Can you imagine if someone in the White House leaked Maxwell Smart's identity as a spy to the public? It's not so innocent now, is it? I feel crushed. I don't think I'll ever walk again. 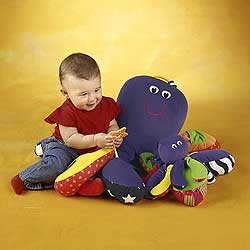 While the battle for Iraq continues to continue to heat up and simultaneously wind down, another war is being raged to get intelligent design taught in schools along side such theories as "evolution" and "study hall." If there is any justice in this world intelligent design will kick the shit out of evolution, tie it up, and drag it behind a pickup truck until it dies, thus sending it back to the depths of hell along with all other forms of logic and reasoning. There were dinosaurs and man living together and I know this because the Bible says so. Jurassic Park 3:16, asshole.

Anyway, I guess what I'm trying to say is that there doesn't seem to be a lot of justice in this world. And because this lack of justice, I've been doing a lot of thinking. It occurred to me that, through the eyes of the octopus, we must look awfully incompetent and corrupt. It's not everyday you realize you're disappointing octopuses, and that has me a little worried. I think we could do better, because frankly this situation is embarrassing. We may not have 8 long tentacles or be able to shoot ink out of our groins, but those aren't necessary skills in building a sane and rational world. Sure they help, but human ingenuity is pretty crafty as well. The octopus may use its ink for propulsion and evasion, but we use ink to write books. We've already got an edge, now let's start cutting shit with it.