Having recently moved from Wisconsin to Washington state, I can't help but make comparisons of the two locales. I had lived in Wisconsin my entire life and this was the first "big move away from the 'rents" for me seeing as I went to college only two and a half hours away from my native Green Bay, home of Packer Football. I capitalize and embolden the words "Packer" and "Football" because in Green Bay, Wisconsin, Football is a religion and a way of life:

This is the tattoo that all babies receive immediately after birth. Parents pick what rival team is represented on the helmet below.

Domestic abuse rates increase dramatically after a Packer loss, and on game days the streets of the city are deserted because everyone is either at the game, watching the game on television, or dead. They might be listening to the game on the radio, but no one really talks to those creepy radio people anyway.

When a baby is born in Green Bay hospitals, it is given a Green Bay Packer tattoo to mark its entry into the Cult of Lambeau and it is automatically put on the list of people waiting for season tickets. While growing up it is subjected to hours of programmed learning in which it becomes fully able to accept the Packer Legacy and it is informed of its role as a Green Bay Football fan.

Heretics who insist on raging against the machine by saying that they are Bears or Vikings fans or by wearing another team's paraphernalia inside the city limits (THE HORROR!) are brutally slaughtered and hung above the streets for all to see. The bodies are thrown into the locker rooms of visiting teams along with rotten fruit and year-old copies of People Weekly.

On the third Saturday of every month, 12 of the city's virgins are sacrificed at an altar dedicated to the head coach to ensure a victorious football season and a bountiful harvest. As a result there is a whole lot of statutory rape going on because only a select and chosen few decide to remain virgins even though it is considered honorable and right to die for the Packer Cause. Most of the underage sex involves Packer players and high schoolers in area hot tubs and there are, in fact, specialized hotels that cater to football players and their young consorts, complete with sound-proofed walls.

Sexually transmitted diseases such as Ass-Dropsy, Itchy Bump-Nuts, and Wiener Red and Full of Pain Syndrome are on the rise due to the increase in irresponsible sex and there are hundreds of illegitimate children born each year, thus continuing the beautiful cycle of life, Football, and death.

Yes, Green Bay was a great place to grow up but it was simply time to move on. To SEATTLE, that is!

Whilst comparifying Seattle and the Cheeselands I found a lot of similarities, but I was shocked at the stark contrasts between the two places. It sounds cliché to say "HYUK, I AM FROM THE COUNTRY YOUR CITY WAYS CONFUSE AND ASTOUND ME," but that's actually closer to the truth than you might think. Not that we don't have cities in Wisconsin, but the cities tend to be just collections of farms that are closer together than other farms that are not as close together. Sometimes there are a lot of cows standing in one section of a pasture and they all of a sudden decide to incorporate, thus forming a city. It's very interesting to see. The biggest city is Milwaukee with about a million people or so, and three-quarters of them are exceptionally fat. They are so fat they could easily count for two or even three people just by themselves. There also seem to be more abandoned buildings and warehouses than people in the city of Milwaukee. And even more car repair establishments or garages run by toothless men with mullets. And more poor-quality beer than all of these things put together.

However, the main difference that I have noticed between Washington and Wisconsin is that the horrible mutant freaks in this state are even worse than those I was accustomed to seeing in Wisconsin. And for me to say that is quite something, folks, because there are some freaky people in that state. But honestly, the Wisconsin freaks are bland macaroni and cheese compared to the amazing circus people one finds in the lovely Pacific Northwest. I will illustrate this with a few common freak categories so that you can see what I'm talking about.

FAT MEN: We have all seen fat men. There are fat men everywhere just like there are people who like white chocolate, and they are equally disturbing. But even coming from a state riddled with coronary artery disease and stroke, where it is common and acceptable to have at least five heart attacks by the age of 40, I was not prepared for the fat men of Washington: 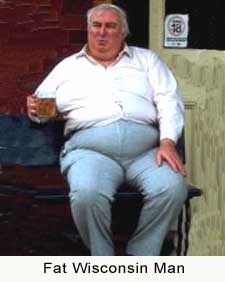 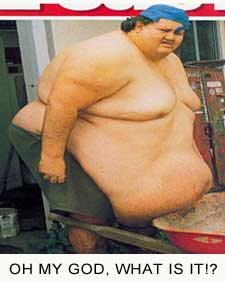 FREAKISH CHILDREN: Unfortunately, the terror does not end with obese men. There are children in Wisconsin that one would swear to be more monkey than human and whom one would gladly kick just to get them to shut up or go far, far away. But the children in this state are warped and twisted parodies of human life. They are genetic freak-spawn doomed to a life of misery and pain: 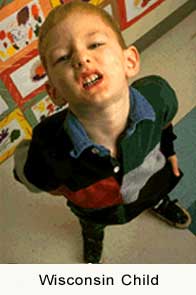 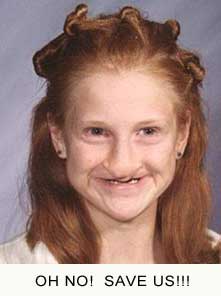 STEREOTYPICALLY CRAZY PEOPLE: These people are everywhere, but nowhere are they more insane than here. Whether homeless people with grand conspiracy theories concerning the illuminati or the freemasons taking over the world via mind control devices or scientologists, they run free upon the range here in Washington. In Wisconsin "crazy people" are considered to be limited to the categories of people who care about the environment and people who voted for Gore. Usually these are the same people so it is easy for Wisconsinites to know whom to avoid. But here in Washington, they take crazy to a whole new level. 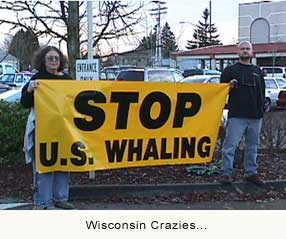 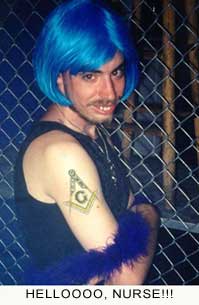 These are just three categories of creepy people, but it gets a lot worse. The poor people here are somehow even poorer. The smelly people are much smellier. Going someplace on a daily basis almost ensures that you will encounter at least one memorable freak. It might be the woman in the car ahead of me who can't stop swaying violently back and forth or the fat man skipping down the sidewalk with a cat under one arm, but the weird people here are definitely weirder than those I am used to. I think this is a good thing because I am broadening my horizons and am becoming more aware of a broad spectrum of people that I was previously unaware of. Of course, I have to tell myself this or else I'd start making plane ticket reservations to go back to Wisconsin.

Despite the increased freak population, I like Seattle so far. It has been both accomodating and hospitable despite the desire to close my eyes every time I am in a place with a large number of people. The best part is that although myself and eFiance Rich "Lowtax" Kyanka live about 20 minutes away from the city itself, so we are still able to get our daily requirement of at least one creepy mutant. In this way I realize that Seattle's population of freaks is on the move and that they are spreading out and multiplying. Soon, like a cancer, they will spread to other parts of the country and eventually to your neck of the woods where they will set up residence and make you laugh and cry in horrow and amusement every day you see one of their hideous number. But when you see them at your house, thank Seattle, because that's where they come from.