HELO, WELCOME TOO MY VIRUSE! 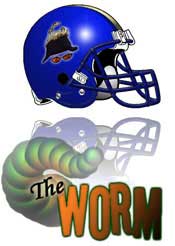 Oh no! It's "The Worm!" Quick, get on your anti-virus football helmet.

As any webmaster who doesn't run a Geocities Clefairy website is well aware of, the insidious Klez worm has been popping up in enough email messages to outnumber the total quantity of 1990's movies featuring Tommy Lee Jones chasing somebody across North America. This worm is undoubtedly the most annoying and obnoxious virus in history due to its ability of mutating and changing subject lines, message bodies, attachments, and even spoofing return addresses. If you don't believe me, and I can't understand why you wouldn't because everything you read on the Internet is obviously true, check out this article on News.com:

The worm arrives in an e-mail message with one of 120 possible subject lines. There are 18 different standard subject headings, including "let's be friends," "meeting notice," "some questions," and "honey." On top of those, seven other patterns exist, such as "a x game" and "a x patch," where x can be one of 16 different words, including "new," "WinXP," and the name of any of six major antivirus companies.

In many circumstances, the worm doesn't need the victim to open it in order to run. Instead, it takes advantage of a 12-month-old vulnerability in Microsoft Outlook, known as the Automatic Execution of Embedded MIME Type bug, to open itself automatically on unpatched versions of Outlook. The program will also cull e-mail addresses by searching a host of different file types on the infected PC. Using its own mail program, the worm will send itself off to those e-mail addresses. In addition, it will use the addresses to create a fake "From:" field in the e-mail message, disguising the actual source of the e-mail.

In other words, I hate this worm more than life itself. It scans through an infected computer's Internet cache files, finds websites the user has recently visited, and then rips the mailing address of any email account listed on that page. The more infected users who read your site, the more worm emails you get and the more email worms that are sent out in your name. It's a truly great and wonderful thing and I'm fairly sure I'd really appreciate the genius behind this worm if I had a hole drilled in my head and dog urine was being slowly poured into my brain. Unfortunately I don't have time to have this helpful surgery performed, as I've been spending approximately 27 hours a day deleting Klez worms that have been sent to me by very stupid people who don't run antivirus programs and probably waste their entire day trying to eat napkins and coffee creamers they stole from Denny's (hey dummies, download the Klez antivirus program right here). In addition to deleting those worms, I also have to deal with the morons who are sent Klez worms with my spoofed return address, bitching at me for sending them a virus I never sent. Hell, the only email I send out these days are one-word responses to people attempting to flame me for being unfunny, replies which contain such incredibly witty and hilarious Internet gems as "LOL" and "ASL???"

I don't think it will surprise anybody when I reveal that the worm thrives on one of the approximately five gazillion vulnerabilities of Microsoft Outlook, a program that was apparently coded in six hours by two guys who move furniture for a living. It doesn't matter to Microsoft that their mail program is one of the most widely used email clients in the universe; they are undoubtedly too busy praying to the god of their choice that somebody somewhere will make a good game for the X-Box or Bill Gates will discover how to travel back in time and decide to allocate resources to a better profit-generating product than the X-Box, such as "Microsoft Bob XP." Now I don't want to get all you console nerds out there in a fit over poking fun at the X-Box because I know how much you cretins love to write 15-page flame messages explaining why the game system of your choice is better than Jesus Himself. I don't care for playing games on the X-Box, Gamecube, PS2, or PC. I don't play games much these days except cat and mouse games where the hunter becomes the hunted and nothing is what it seems and he's a good cop gone bad, framed for a crime he didn't commit and is now out for revenge, out for justice, out for lunch. 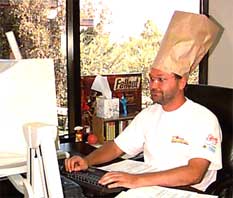 A Microsoft Outlook programmer intensively working on powering up his level 42 Elf.

It used to baffle my mind how Microsoft didn't give a flying donut about patching up their email client to contain less holes than an average Israeli child. It's not like Outlook and Outlook Express are two tiny programs that nobody uses; these are major applications that are installed in like 126% of the population's computers. While us Windows / Outlook chumps sit here and delete spoofed Klez worms all day like a crazed duck pecking at, uh, a piece of bread that looks like the "delete" key, the Mac and Linux weirdos are undoubtedly sitting comfortably in their very, very, very large load-balancing chairs and proclaiming their OS's superiority to Microsoft Windows. That's all fine and good by me, however I'd like to point out one little fact: neither Mac or Linux can run MS Paint. Point, match, and checkmate, inferior operating systems! Although these smug "alternative" OS-disturbed individuals take comfort in the fact that 12 out of every 11 viruses target Windows computers, they don't seem to realize that Microsoft is in the process of fixing all their stupid broken email programs. To prove my point, here is an actual conversation between the two lead programming engineers of Microsoft Outlook from around a month ago:

Now I admit this conversation may seem a bit nonproductive, but I assure you that the engineers were simply saving up all their programming strength for their upcoming surge in Internet security coding which is evident in this conversation between them that I heard just yesterday:

As you can tell, the programming team is sharpening up their coding skills and it's only a matter of minutes or perhaps decades before Windows ships with a secure email program. However, none of this really matters to me at this point, especially since I have about as much faith in Microsoft as I do in unbiased reporting from Slashdot. The thing that really bugs me about this whole bug situation (ha ha, that's a little joke for you folks out there, I hope you enjoyed it) is that NOBODY WHO CODES EMAIL WORMS OR VIRUSES KNOWS HOW TO SPELL OR WRITE IN COHERENT ENGLISH. Every major virus in the past five years has been highlighted by its broken English, nonsensical sentence structure, and obvious spelling errors. There's almost no way to tell if you have just received a virus or an email containing a post from Fark.com's news comments section.

One would think that these virus coders would at least attempt to brush up on their English before trying to create a "realistic" worm. I mean sure, 95% of all idiot Windows users will blindly open any email attachment sent to them by any email address in the universe, but these malicious programmers might want to take a little pride in their work and at least attempt to pass off their emails as legit pieces of vague spam mail. The current Klez worms contain just terrible content; check out an example of a recent worm I just received:

Now I don't know about you, but I am about as tempted to open this message as I am to click on any link on Stileproject. I'm sure as time progresses linearly and we're soon in the future, there will still be new and exciting exploits in Microsoft email applications popping up every day like Middle East suicide mall-bombers, so I don't think we can ever hope for a worm-free Windows email system. However, there is still hope for the dyslexic foreign people writing email worms. Thanks to the gracious nonprofit help of our A World For a Better World Tomorrow organization, we have created a charity program called "This Is a Good Program, I Hope You Enjoy It." For every dollar you donate to "This Is a Good Program, I Hope You Enjoy It," we will use some portion of it to help teach these third-world country virus coders English lessons. If we don't raise enough money then we will use the cash to buy them spellchecking and grammar-checking programs. In the odd chance that we don't receive enough money for that, we will pocket the cash and use it to purchase narcotics for our own personal and private use. Find a place in your heart, a place in your harddrive, and a place in your pocketbook. Open your arms and help A World For a Better World Tomorrow help these unfortunate souls learn how to write proper English.

Donate One Dollar to "This Is a Good Program, I Hope You Enjoy It." 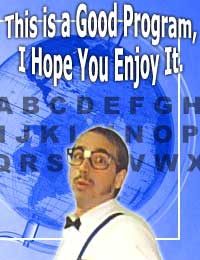 Years from now, when you're routinely receiving email worms that look just like your dead father's writing, you'll thank yourself for being a generous donor to such a selfless organization. Or you'll think you're a jerk. Either way is just fine by us as long as we don't have to get any emails about it.

Hentai games have a proud tradition of believable plots, and in the case of The Maid's Story the plot centers on your character being a jobless college student. You are approached by your basement dwelling friend with the rumor of a job opening working as the supervisor of a small maid's school. Naturally you check it out and take the job, running the mansion and bringing up three maids. Part of being a professional maid is apparently having your ass violated and pissing in a cat litter box, because these things also factor into your no-nonsense training regime. You have ninety-days to whip the three maids into shape, raising their statistics in categories like "Cleaning", "Washing" and the nebulous "Service" in preparation for the final one-time "maid exam". Turning you loose on these three girls is something like turning a starved tiger loose on sheep with raw steaks stapled to their face.