If you are like me, you will prefer the comfort and warmth of spending as much time as possible indoors. However, according to what I've seen in movies and TV, there is an exciting world outside of your front door. Sometimes there are events happening in public which are ten billions times more incredible than anything you could ever imagine. So for those who would rather sink into their soft leather chair and read about why the human race is pretty damn weird as opposed to going out and experiencing it for yourself, feel free to enjoy the follow tales of public strangeness courtesy of the SA forum goons.

I saw a man in Times Square wearing nothing but briefs, cowboy boots, and a cowboy hat, playing the guitar. 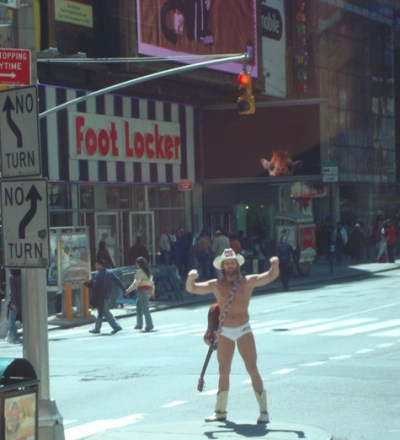 While on vacation in France, I saw a street musician play an electric guitar with his tongue. It actually sounded pretty good.

On my first visit to the college I go to now, I saw about 20 people LARPing by the library. Most of them were dressed up like goths, as apparently they were playing Vampire. One guy was dressed up as a cowboy version of Neo. He was pretending to dodge bullets like he was in the Matrix. That is what made me decide to go to this college.

For reference, I live in New York City.

I have seen the following:

A homeless woman take a shit on a rush hour train platform in the Village, then pull out a roll of toilet paper and wipe her butt. She then threw the toilet paper in the trash bin.

Wars between rival gangs in Chinatown. The best/worst moment was a bunch of high school Chinese guys sitting by the arcade and then their Nextel phones started chirping. Ten minutes later a brawl broke out.

A black man in nothing more than a blindingly white thong, white heels and a blonde wig washing his car in the West Village at noon on a Sunday. That was definitely bizarre, but it comes with the West Village.

We've got a local celebrity here in Austin named Leslie. Just your average homeless cross-dresser, who also happens to run for mayor from time to time (and gets a scary amount of votes, I might add).