The "Yo Gabba Gabba!" Creation Myth 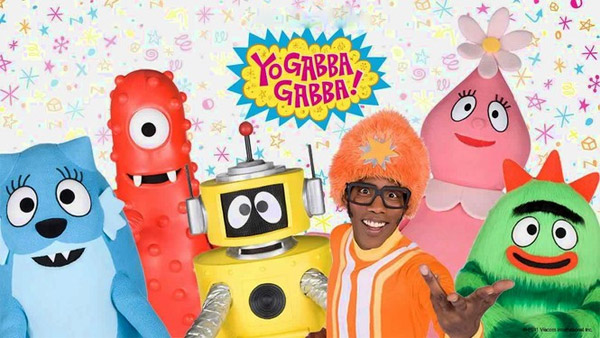 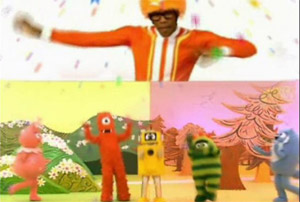 In Gabba lore's reassuring creation myth, life is physically placed, fully formed, onto the earth.The creation myth of Yo Gabba Gabba! begins, like most creation myths, with the universe in a formless state. The void echoes with the footsteps of the approaching godhead, DJ Lance Rock, dressed in a bright orange costume that would fit right in with the costumes of Matthew Barney's Cremaster. DJ Lance brings forth the holy vessel: life-giving music reified as a boom box which contains the dormant bodies of his progeny. He towers over a world represented by a diorama keyed to the four elements important to Gabba lore: stone, woods, flowering hills, and ice.

Into these realms, Lance Rock thrusts the four lesser deities who watch over the mortal world. The first god named and created by Lance Rock is Muno, a tall cyclops with a crimson body. Muno watches over the rocks. Foofa comes next, and with her plump, pink body and flowering head, she is clearly the Gabba fertility goddess. Toodee, a fanged, blue reptilian, watches over the ice land, and Brobee, with his waving arms and awkward body, is the master of the woods.

The fifth creation of DJ Lance is the robot known as Plex. This being moves freely among the realms and serves the direct word of DJ Lance, at times even using his worldly powers to summon DJ Lance to the earth realm. He is much more aware of the contextual reality of Gabba and this, coupled with his powers, make him the Messiah figure of Gabba lore.

The monsters exhibit extremely naive behavior, often needing basic concepts explained to them by Plex or by DJ Lance himself. They seem to have little understanding of subjects ranging from birthdays to pets to sleeping. This makes the entire Gabba reality a sort of extended creation myth, where the godhead interacts with his progeny, shaping their development in a direct way. 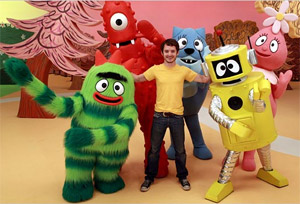 Guests arriving for Dancey Dance are seemingly disintegrated by Plex.The very first lesson DJ Lance teaches to his creations is eating. Creative destruction and an understanding of the cycle of life and death are lessons imparted by many mythologies. Food in the reality of Yo Gabba Gabba! is partially anthropomorphized and instantiated. Carrots and peas and chicken have faces and literally ask to be eaten, begging "to go to the party in [Brobee's] tummy."

In some Native American mythologies animals are revered for the sacrifice of their life. In Yo Gabba Gabba! the act of being eaten is not a sacrifice at all, it is a pleasure. Internal cutaways of Brobee (and later other deities) reveal primordial digestive tracts and internal organs. The consumed food dances and laughs in the stomach.

Ritualized dancing, or "Dancey Dance," plays an important role in practicing the religion of Gabbaland. Minor celebrities from our world are transported into Gabbaland by Plex and remain just long enough to teach the deities a dance, before being returned to our world, or possibly disintegrated and destroyed.

Conflict in Gabbaland is minimal and almost always a result of clumsiness. Songs, dances, and profuse apologies heal most wounds. One notable deviation from this pattern is an incident in which Muno bites Foofa, forcing Plex to petition DJ Lance for intervention. Muno ultimately learns, "Don't, don't, don't bite your friends" and Foofa, seemingly unharmed, accepts Muno's apology. 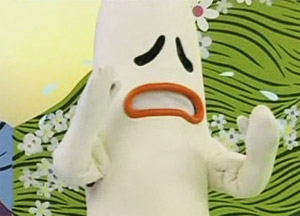 Widely reviled, Gooble serves as the pathetic, beaten anti-god.Although death is never dealt with, there is a minor anti-god who rules over a Gabba underworld. Gooble, the crying god, is a perpetually sad entity. He appears infrequently and can be seen moping around in the background, usually weeping. He is greatly disliked by the other gods, although this mistrust is scolded by DJ Lance, perhaps suggesting Gooble was an early experiment in creation that went awry. Gooble lives in his own realm, a dark and sinister place apart from the other gods of Gabba myth, though he seems able to come and go from this underworld as he pleases.

Gabba lore is syncretic, incorporating elements of our reality and beliefs, like cowboys, cars, and Biz Markie. Tolerance is fundamental to Gabbaland. Rival beliefs are treated as acceptable alternatives to the world described by DJ Lance and his gods.

Humans interact frequently with the gods, sometimes visiting for the Dancey Dance or for other reasons. Outside of the context of the Dancey Dance, humans encountering Gabba gods for the first time react with extreme fear.

The fear of mortals in Gabbaland is justified, for although the gods of Gabbaland would seem benign, they alone are returned to the boom box, suggesting that only the gods are worthy to be reborn each new day. We mortals can only dance and hope that death, or Plex's unforgiving beam, does not ultimately send us to the morose underworld of Gooble.