While The Avengers is still somehow taking planet Earth by storm, the world is also taking a collective dump on Peter Berg's Battleship, which drops stateside this week. We won't just keep beating the "Battleship is actually good" drum, though*, because other movies actually came out this week, much to everyone's surprise and horror! Vargo throws down with The Dictator, while the rest of the Current Releases team waits on the sidelines to punish What to Expect When You're Expecting and Hick for being complete garbage.

EXPECTATIONS: Sacha Baron Cohen is one of the most polarizing figures in cinema today. His intentionally offensive style is impossible to market without flat-out lying, and as a result, many of his films are misunderstood by the ticket-buying audience. This has turned viewing one of his films in theaters into a betting game, where you can look around and place wagers on which of your fellow theater-goers is going to leave in a huff and demand a refund. Or at least I would play that game, if I weren't the only person in this theater.

REALITY: In the climactic scene of The Dictator, Admiral General Aladeen (Baron Cohen) delivers a speech directly to the audience, expressing puzzlement at how America can be so very against dictatorships. He explains that if America were a dictatorship, our leader would be allowed to do things like spy on U.S. citizens, torture international prisoners, lie about going to war, and fill up our prison systems with one specific ethnic group. Yeah, I could stop the review right here, because the whole movie's pretty much like that. It's rare that a movie comes right out and says what its message is, but still has no idea what it's talking about. 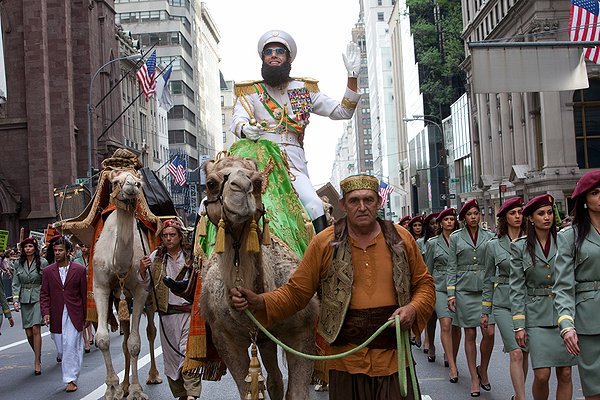 Who loves my wacky antics? Show of hands!

The Dictator follows Aladeen, the oppressive ruler of fictional oil-rich Middle-Eastern country Wadiya, who is forced to come to New York and speak before the UN regarding his nuclear program, which he says, while laughing, will only be used for peaceful purposes. After a botched assassination attempt leaves him to wander the city, unrecognizable without his trademark beard, he is taken in by hippie activist Zoey, played by Anna Faris, recognizable by her trademark lack of talent. What follows is a concept so ridiculous that maybe not even Cohen was able to handle it: A film that asks the question "What would a romantic comedy be like if one of them... was an international terrorist?" It's like one of those fake movie posters that Adam Sandler puts in the background of his films to show that he recognizes what a hack he is, then he goes ahead and makes them anyway.

Let me just say that in the past ten years, no actor, not even Nicolas Cage, Hallowed Be His Name, has proven himself to be able to commit to a character like Sacha Baron Cohen can. The problem is that the characters he chooses to commit to are weak and annoying. The reason Bruno and Borat worked as well as they did was because the comedy came not from him, but from how other people reacted to him. He was the cause, not the effect.

Here, with a completely scripted, non-mockumentary style, he's in the forefront the whole time with probably the worst character he's created. I realize that the point of this character is that it's the embodiment of every stereotype Americans believe about the Middle East. The problem is that when you take all those ideas and actually create a character out of them, not only is it wildly inconsistent, it's also not a person you want to watch, and certainly not one you want to succeed. The tropes it follows are so hardwired into our brains that we're supposed to find ourselves saying "Aw, I hope the nuclear-threatening child rapist gets the girl in the end! Wait..." 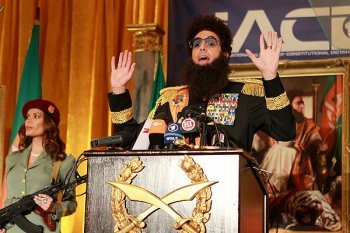 Let me explain, nobody at that parade raised their hands...The problem is, there are much better ways to point out that what western culture believes about its supposed enemies is completely ridiculous. It's so simple, even CRACKED managed to pull it off. In a much more apt example, 2010's Four Lions managed to make the audience sympathize with and relate to a group of terrorists without being overtly offensive, all the while managing to be a lot funnier.

Cohen and director Larry Charles have painted themselves into a corner. The best way to look at Aladeen and overbearing, overly accepting liberal strawwoman Zoey is to imagine there's a South Park-esque THIS IS WHAT CONSERVATIVES ACTUALLY BELIEVE written at the bottom of every scene. Unfortunately, the people who hold these beliefs will never understand that the film is making fun of them, not that this has ever bothered Cohen. In fact, they're probably going to be Aladeen's biggest fans. Without having the object of ridicule on the screen, even those who got the jokes in Borat and Bruno might be rightfully offended at the awful stereotypes that are on the screen. So congratulations, Mr. Cohen. You've created a film that the people you're mocking will love, the people who normally like you will hate, and only a very select few will understand, and they'll probably hate it anyway. Mission Accomplished?

None of this would matter if the film were actually entertaining in any way. As I'm constantly reminded, I write for a website that made 9/11 jokes ON 9/11. There's no such thing as "too soon," and being genuinely funny can buy a lot of forgiveness. So my problem with The Dictator's jokes isn't their content, it's how trite and forced they are. Hey, Porsche has a car named the 911. That's like 9/11! Good thing no one's made that joke in the past 11 years! Here, Cohen's kinda like a kid who won't stop telling terrible dead baby jokes, then calls you a pussy for telling him to stop.

For all its provocations, the film's funniest moments come from the tamest of concepts, like the universally accepted truth that Crocs are hideous footwear only equipped by people who have decided life isn't worth trying anymore. In any case, what The Dictator gives us is sophomoric and lazy at best, and flat-out spiteful at worst.

MINORITY REPORT: "You just don't get it, bro. He's hella-cool because he's offensive and everyone hates him! And I love that!" - A college student, c. 2006